The unpopular Labour leader, Jeremy Corbyn, is 14% behind in the polls in the run-up to the UK's December 12 election. But, it seems, some of his more radical economic ideas are not as unpopular as the man himself. 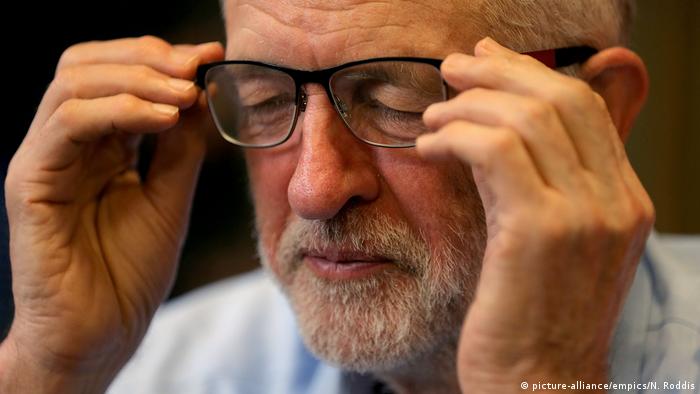 What should Brits worry about more: a no-deal Brexit or a government led by Jeremy Corbyn? That was how the British media has tended to frame the upcoming UK election.

As the outlines of a potential coalition involving the main UK opposition Labour Party, the Green Party, the Scottish National Party and the Welsh-nationalist Plaid Cymru become clearer, the prospect of a Labour government may not be as far-fetched as many believe.

"Thanks to the hubristic incompetence of the new UK Prime Minister Boris Johnson we could be about to see the first major economy in the developed world ruled by a party, or parties, committed to a radical break with neoliberalism," the left-wing journalist Paul Mason argues.

"The core problem with Corbynomics is not that it is insufficiently radical," the author Phil Mullan said. "It is that, if implemented, it would compound the problems of low investment and weak productivity growth. This is because the Labour Party's economic program is simply a more caring version of modern economic orthodoxy," Mullan believes.

Will Corbyn take on Big Pharma and the "too big to fail" financial institutions, or seizing private airports and foreign-owned car plants? Mullan asks. "There are no plans for any of this," he says.

Other surveys have pointed to latent support for a more interventionist agenda, including capping rent prices at the rate of inflation, increasing income taxes for the top 5% of earners, requiring businesses to reserve a proportion of seats on their boards for workers and ending university tuition fees.

Even Bloomberg is drawing attention to Jeremy Corbyn. "Jeremy Corbyn, leader of Britain's Labour Party, is seen as an unpopular politician," the news agency wrote. "But new polling shows how popular many of his radical economic policies are." the Financial Times concluded they were "untried and radical."

Corbynomics' pledges include tax increases for corporations and high earners, handing 10% of company shares to workers, a 32-hour working week, a cap on private rents, strengthened unions and plans to redistribute the assets of private schools into the state sector.

Fiscal expansion: borrowing up to 250 billion pounds (euro ) for long-term investment via a state investment bank;

Expansion of the remit of the Bank of England: this would require the central bank to deliver 3% annual productivity growth, which would mean a more expansionary monetary policy;

Redistribution: taxes on both incomes and assets and also reviving wage-bargaining power through changes to labor market regulations;

"Taken together, this program amounts to a new social contract: It would offer universal basic services to all citizens, as of right. In a country with a welfare state such as Britain, it is a swifter and more effective way of achieving what a universal basic income would — the gradual separation of work from wages," Mason says.

What are its chances?

Mason believes the biggest immediate risk to achieving any kind of Corbyn program comes from capital flight in the short term and political issues in the longer term.

It will also depend on Corbyn being elected. "The likelihood of such policies being implemented will depend on whether Corbyn's Labour can win a majority or, alternatively, garner sufficient public support to lead a progressive alliance with the Scottish nationalists and/or the Liberal Democrats and Greens," says Matthew Goodwin, professor of politics at the University of Kent.

According to the pollsters Ipsos-MORI, he has the lowest leadership rating of any opposition leader since they started conducting surveys in 1977.

Energy on the left

"All of the energy is on the left in politics at the moment," said Ed Miliband, a former Labour Party leader who sits on the  board of Common Wealth, a think tank launched in April aimed at radically changing the ownership of British business. Another think tank, Autonomy, examines the future of work, started life in mid-2017 and produced a report calling for a four-day week, an idea picked up by John McDonnell, the shadow chancellor. Democracy Collaborative, a progressive American think tank, is also now in the British market.

Meanwhile, economists wrote to the Financial Times complaining that the newspaper had published "misconceptions and inaccuracies" in criticizing Labour's economic proposals.

Labour's 2017 manifesto — "For the Many, Not the Few" — reveals that a lot of it could have been cut and pasted from the Conservative or Liberal Democrat manifestos. Balancing the budget; fiscal "credibility" rules; reducing public debt; making Britain a fairer place for all; an industrial strategy to revitalize the economy, and so on. All now orthodox mainstream political positions. This signals a peculiar mismatch between the perception and the reality of Corbynomics.

On its own, the content of Team Corbyn's ideas barely justifies being an ‘ism' or ‘omics.' Labour's new program is a mishmash of proposals, with little coherence, pulling together disparate suggestions from a range of sympathetic groupings, Matthew Bolton and Harry Pitts, who have written a critical examination of Corbynism, suggest.