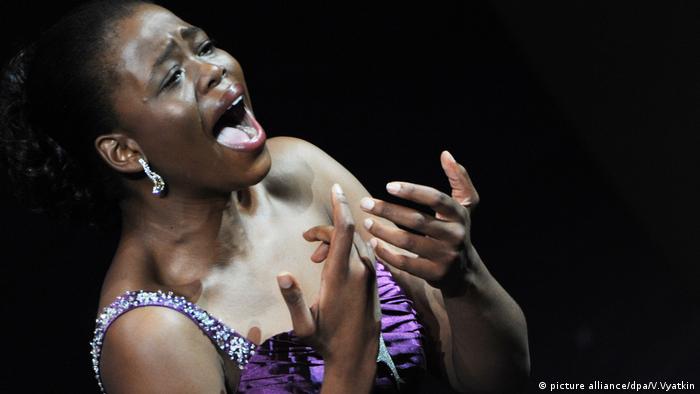 When Hollywood casts Asian characters with white actors, it's called "whitewashing" and is considered a form of cultural appropriation. A case in point: in the science fiction film Ghost in the Shell, the US-American-Danish actress Scarlett Johansson was made up to fit the role of a Japanese cyborg. Constance Wu, an American actress of Taiwanese heritage called it "modern blackfacing." 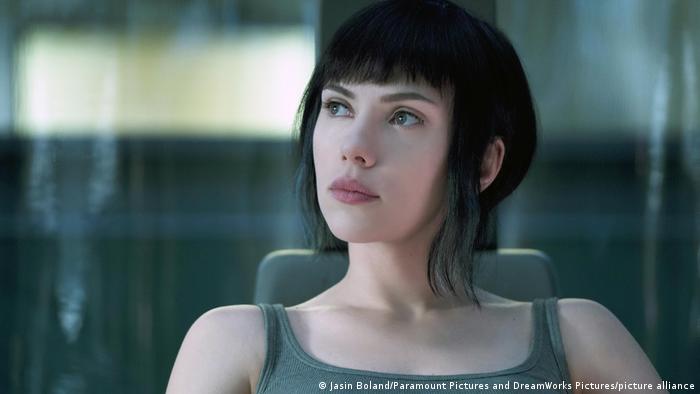 Scarlett Johansson in 'Ghost in the Shell'

After it was announced that Hollywood veteran Ron Howard would direct the film biography of Chinese pianist Lang Lang, Lulu Wang, a Chinese-born American filmmaker, questioned whether Howard had the necessary "intimate knowledge" of Chinese culture and history to properly tell the story of the world-famous artist.

Offered the role of a Japanese-American major in Hellboy in 2017, actor Ed Skrein declined following accusations of whitewashing, leaving the role open to be "appropriately" cast. Daniel Dae Kim, an American of Korean lineage, got the role and thanked Skrein for acknowledging that "Asian characters are for Asian actors."

Malaysian-British actor Henry Golding was twice affected by the new sensibility. A heterosexual, he portrayed a gay Asian immigrant in the 2019 movie Monsoon but initially hesitated when voices were raised that the role should go to a gay actor. The actor of mixed ethnicity again found himself under attack when taking a role in Crazy Rich Asians of 2018: some felt that it should have gone to a full-blooded Asian. "I know I'm Asian through and through. There's nothing I needed to prove," said Golding, now discussed as a candidate to portray the next James Bond — in the absence of counter protests.

Whitewashing's long and not so venerable tradition

Casting non-white roles with white actors and actresses is a practice as old as film itself — from Germany's popular 1960s Winnetou films, where Frenchman Pierre Brice played the native American chief, to actor Laurence Olivier donning blackface to depict Othello in the eponymous 1965 movie.

Then there was yellowfacing, such as in Breakfast at Tiffany's in 1961, with Mickey Rooney made up to portray a Japanese landlord. 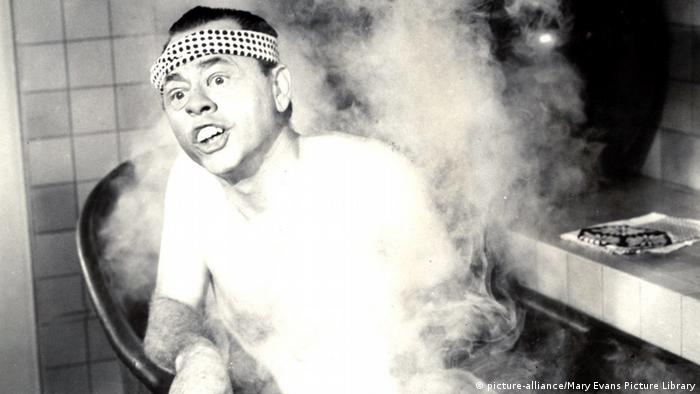 John Tehranian, professor at Southwestern Law School in Los Angeles, has written a book on the subject of whitewashing that includes his own experience as an Iranian American in academia. "Of course, there is nothing inherently wrong with race-blind casting, as long as it works both ways," said Tehranian. "But in reality, it never has; one rarely sees, for example, an African American, Latino, or Asian actor cast as a white character."

Opera goes by its own playbook

For one work in the operatic canon, colorblind casting is essentially ruled out. For performances of Porgy and Bess, composer George Gershwin and songwriter Ira Gershwin willed that their "Black opera" be henceforth cast only with Black singers. Trying to circumvent the rule, the Hungarian State Opera had its white Hungarian soloists sign a statement declaring that they identify with Black Americans. The Gershwin estate was not satisfied with the solution. 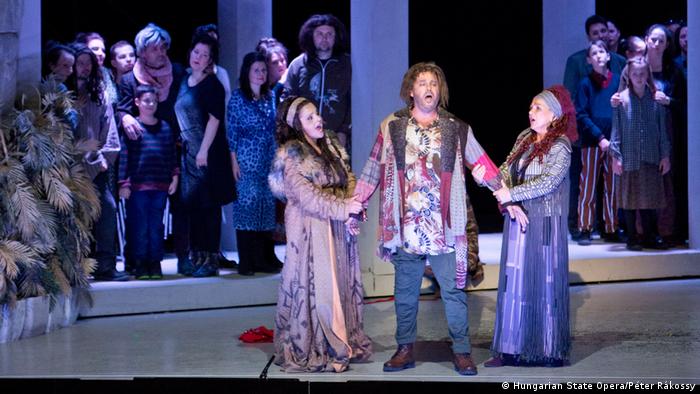 'Porgy and Bess' in Hungary, with an all-white cast 'identifying' with Black people

Black singers eventually conquered the stage by the mid-20th century, but not without setbacks. When the conservative Daughters of the American Revolution blocked the African American contralto Marian Anderson from performing at Washington's Constitution Hall in 1939 because of her skin color, an angry First Lady Eleanore Roosevelt protested. Anderson then performed at the Lincoln Memorial, and in 1955, at 58, she broke the color barrier at the Metropolitan Opera in New York.

Another African-American operatic pioneer, Leontyne Price, was famed in the role of Aida in Giuseppe Verdi's opera of that name from the 1950s until the seventies, conquering one of the world's most prestigious houses, La Scala in Milan, in 1960. A year later, Grace Bumbry was Venus in Richard Wagner's Tannhäuser at the Bayreuth Festival. Conservative Wagnerians were up in arms, but critics delighted at the singer's stage presence and vocal texture. 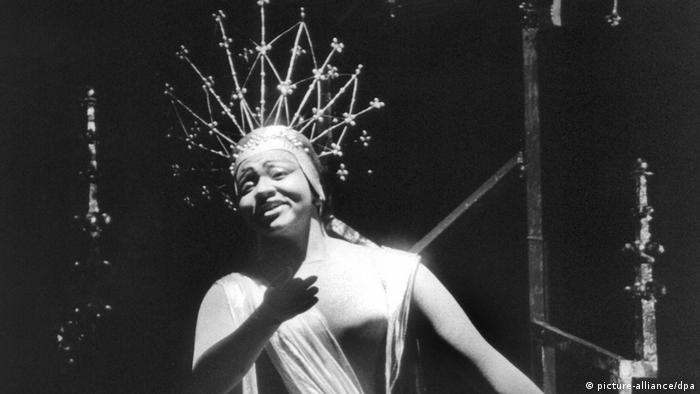 She went down in Bayreuth Festival history as the "Black Venus:" Grace Bumbry

Jamaican-born British singer Willard White, knighted in 2004, performed along with Grace Bumbry in Scott Joplin's "Black opera" Treemonisha but also broke the color barrier with roles like Mephistopheles in Berlioz' The Damnation of Faust and Wotan in Wagner's The Rhinegold and The Valkyrie.

Currently in high demand on the world's stages are the South Africans Pretty Yende and Golda Schultz and the Americans J'Nai Bridges and Lawrence Brownlee. For them, the restrictions based on skin color would no longer seem to exist. Meanwhile, modern stage directors freely interpret the mostly historical repertory, updating the works or placing them in different cultural contexts, thus relativizing the importance of skin color. 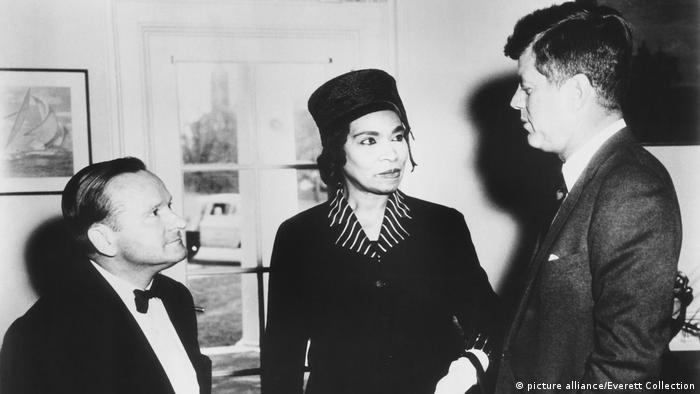 No survey of Black vocal artists — or vocal artists altogether — would be complete without Jessye Norman. Many take credit for the discovery of that voice of the century, including the 1968 ARD Music Competition in Munich, where the American won first prize. With her dark-timbred soprano, Norman was veritably deified at her operatic and concert appearances.

Offstage though, Norman had different experiences. In her 2014 autobiography Stand Up Straight and Sing! she related various kinds of daily discrimination: a careless remark by a conductor, an insensitive question by a critic, security personnel keeping her out of the hotel pool. Norman kept a diary about these instances until it grew too lengthy. 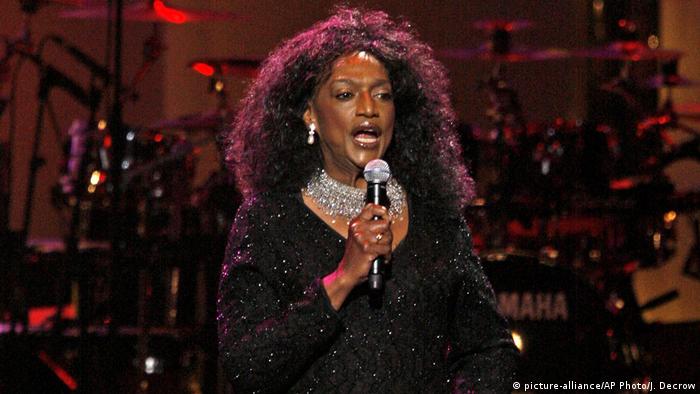 As the arts and entertainment industries continue to struggle with issues of discrimination — including reverse discrimination — other voices come to mind, such as that of the self-described "eternal optimist" Jessye Norman, who died in 2019: "Society will, inevitably, come to the understanding that racism is mindless, lacking in all the light that is within us."

The 42nd German Music Competition has come to a close in the western German city of Bonn. Among the five winners were a soprano, two cellists, one tuba and one trumpet player.