Football’s return to European stadiums has been a source of joy, but a spate of anti-Black Lives Matter protests has sullied the comeback. A high-profile incident in the Premier League was one of many. 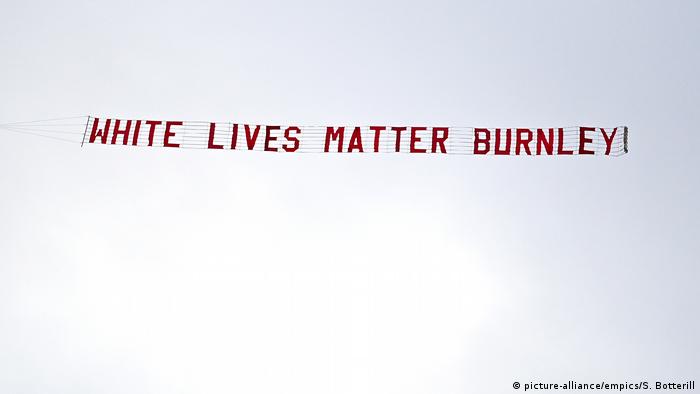 Monkey chants, a Confederate flag, "White Lives Matter" banners and even a call for the release of the policeman charged with the death of George Floyd have all been seen at football grounds in Europe over the past month.

The spread of such a message is a cause of concern for anti-racism campaigners and researchers, who say racism in football has "been taken to a new level" and the sport is being used "as a tool to propagate."

Pavel Klymenko, head of policy at anti-discrimination network Fare, told DW that the Black Lives Matter message is being, sometimes wilfully, misunderstood as being as dismissive of white lives when, in fact, it is an attempt to address perceived systemic inequality and racism.

He believes football is being used to lead a racist backlash against the Black Lives Matter movement.

"We will be seeing this more often, " Klymenko said. "It's easy to dismiss these types of incidents as extremist, but when it reaches the English Premier League it shows how it's spread. Part of the problem is that we have to admit this is wider than football. Football just provides the platform to propagate these ideas. "

A new dimension to racism

The Burnley fan who organized for the banner to be flown over the Etihad Stadium has refused to apologize, yet his own club condemned his actions. Players had taken a knee in support of Black Lives Matter just moments before the flyover.

Captain Ben Mee said the players were "ashamed and embarrassed".

"We are embarrassed that our name was in it, that they tried to attach it to our club - it doesn't belong anywhere near our club," he said post-match.

"These incidents are no longer about targeting any coloured footballer," he said.

"It's now targeting a whole movement. The traditional approach to racism in football has been taken to a new level."

'White/All Lives Matter' banners associated with football fan groups have now been seen in The Czech Republic, Ukraine, Hungary, the Netherlands, as well as the United Kingdom.

Chauvin is the police officer charged with second-degree murder over the death of George Floyd.

Racist abuse has also been hurled at black players in Russia and The Czech Republic, including Viktoria Plzen's Jean-David Beauguel.

For Klymenko and Fare, the Black Lives Matter movement has been "fundamentally misunderstood".

"The far-right are propagating the message and now it's being taken up in wider sections of society," he said.

"Some know exactly what they're doing, others are ignorant. Black Lives Matter has been presented as black people demanding more rights and dismissing white lives, but it's a reflection of hundreds of years of inequality and racism and calling for that to be reversed.

"We have to be prepared for the backlash that is coming."

Kassimeris echoed Klymenko's belief that the incidents in football were a "reflection of society" and said European politics was giving people courage.

"It justifies these actions [in their eyes]."

The way forward is a little murky. The Czech FA only handed Sigma Olomouc a €4500 ($5000) fine for the "racist behavior" of their fans against Beauguel.

Uefa themselves have appeared reluctant to hand down tough sanctions in the past and Kassimeris called their three-step protocol for tackling racist abuse "nonsense."

Klymenko said football "has a responsibility" to lead the way.

"It's important for clubs to confront their fans, work with their fans. It has to be clear that there will a consequence for spreading hate," he said.

European football took on the challenge of eradicating hooliganism prevalent from the 1970s into the 1990s, with largely positive outcomes. Racism was the next target.

Kassimeris says we're still waiting to see results in the fight against racism.

"That was 25 years ago and I haven't seen a difference. The same incidents we saw in the 1990s we still see today."

One of NASCAR's only Black drivers has been the target of racial intimidation after the league banned the Confederate flag. NASCAR has vowed to root out the perpetrator of the "heinous" act. (22.06.2020)

USA goalkeeper Zack Steffen on Black Lives Matter: If you're silent, you're against us

US national team goalkeeper Zack Steffen, currently on loan at Fortuna Düsseldorf, has had enough of police brutality and racism. He believes the time for talking is over – now he, and others, must take action. (12.06.2020)