No, Venus and Jupiter are not about to collide for real. But it will look like that on April 30. The two brightest planets are aligned with Mars and Saturn. 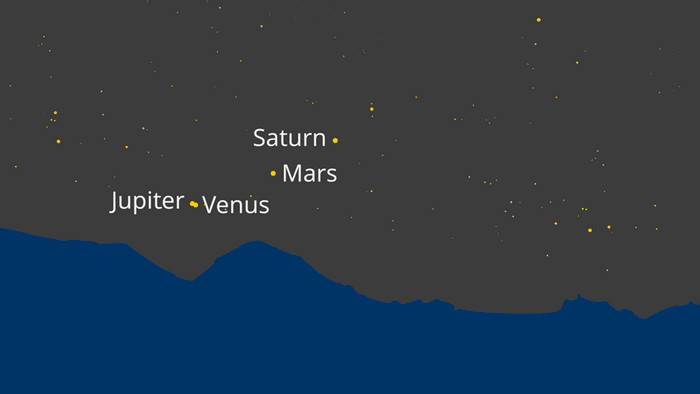 Four planets — Venus, Mars, Jupiter and Saturn — will almost perfectly align as seen from Earth in the northern hemisphere

Planets and stars often align, but April 2022 has been a rare treat, with four of our closest neighbors in the solar system — Venus, Mars, Jupiter and Saturn — aligning almost perfectly and visible to the eye without a telescope.

And there's one more highlight still to come: On the mornings of April 30 and May 1, Venus and Jupiter will appear to collide when they come together in what's known as an ultraclose conjunction.

Venus and Jupiter — the two brightest planets in the sky — will in fact be far apart. But, depending on where you are, Venus will look like it is either covering or nudging Jupiter.

It won't be as close as the grand conjunction of Jupiter and Saturn in December 2020, but NASA's sky watchers say it will still be "really impressive and make for thrilling sights in the morning sky."

Mars and Saturn had a similar close conjunction earlier in April.

What exactly is a conjunction?

A conjunction happens when two planets, a planet and the Moon, or a planet and a star appear close together from the ground.

Planetary conjunctions happen often in our solar system because the planets have similar — although not the same — ecliptic orbits around the Sun.

But the constellations vary. It all depends on how fast or slow the planets orbit the sun in relation to one another.

Venus-Jupiter conjunctions are common, occurring about once a year.

Even if they are routine — and NASA says conjunctions have "no profound astronomical significance" — they are a pretty sight.

Can I see the conjunction from anywhere in the world?

Take that grand conjunction of 2020, for example: Jupiter and Saturn appeared to be very close, but they were still about  800 million kilometers (497 million miles) apart.

What's so special about this 4-planet parade?

Given that four-planet conjunctions can occur about once a year, you may say it's nothing special at all. But this event is unique because it's effectively two planetary conjunctions happening at roughly the same time, creating a much larger, four-planet constellation.

Some people call it a small planet parade. That is not a scientific term, but it does neatly describe what happens when more than two planets appear to align in the same part of the night sky.

Larger conjunctions and alignments are far less common. Five planets align roughly every 19 years and  some say all eight planets align every 170 years. But that depends on your definitions — specifically, how perfectly the planets align.

Some experts say the last time the eight planets were in perfect alignment was 1,000 years ago. But others say it never happens because the planets each orbit on slightly different planes. They say you only ever see perfect alignments in movies or on illustrated maps of the solar system on postcards.