The natural gas industry is growing rapidly in the US. But behind the boom is a global tangle of interests in which, for example, Germany's move to abandon nuclear power has effects on rural Americans. 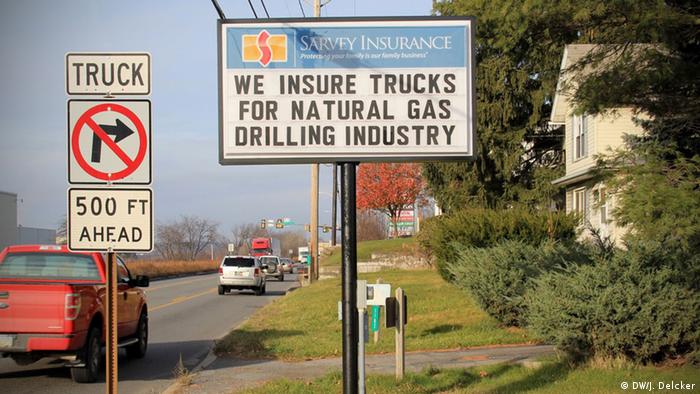 The woods and meadows along the way to Jenny Lisak's farm in northwestern Pennsylvania are situated on the Marcellus Formation, an enormous mass of sedimentary rock stretching across several states in the US and into Canada.

There's much to be discovered below this idyllic Pennsylvania landscape. The Marcellus Formation houses numerous raw materials, including many natural gas reserves. Investors are hoping to capitalize on these reserves, and multinational energy companies are buying up local land.

Organic farmer Jenny Lisak stands at the edge of her blueberry fields, located a few hundred meters from where energy companies were extracting shale gas just two years ago. Soon their excavators, drills and trucks will be back. On the other side of her farm and within sight of her kitchen window, another extraction site is set to open. 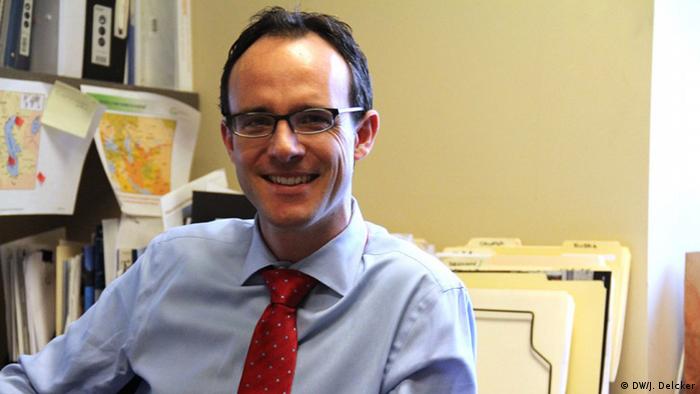 The US is in shale gas fever at the moment, viewing the resource as a way to boost a shaky economy. Thanks to a new technology called fracking, short for hydraulic fracturing, shale buried deep underground and hard to reach can now be extracted in a more lucrative way.

But the method is highly controversial. Critics say that fracking over long periods of time can contaminate groundwater, and that poisonous gases can escape during the process with unclear consequences for nearby people and animals.

At her kitchen table, Lisak talked about how the water in a spring on her land changed color during the fracking. She says she's worried, pointing out that she uses the water for her baths, drinking water and her crops.

The closest little town near Lisak's farm is DuBois with a population of 8,000. Fast food restaurants line the streets into DuBois, next to signs offering insurance to passing fracking trucks.

A local waitress in a pizza parlor says the hotels are filled with workers who came to the area for fracking jobs. With a wink, she says she likes them because they give good tips.

But the increased drilling means the price of natural gas has gone through the floor. It's worth around a fourth of what it was in 2005. So why are people looking for more of it? Finding an answer means leaving the fields of Pennsylvania and heading to Washington and Wall Street as well as across the Atlantic to Europe. 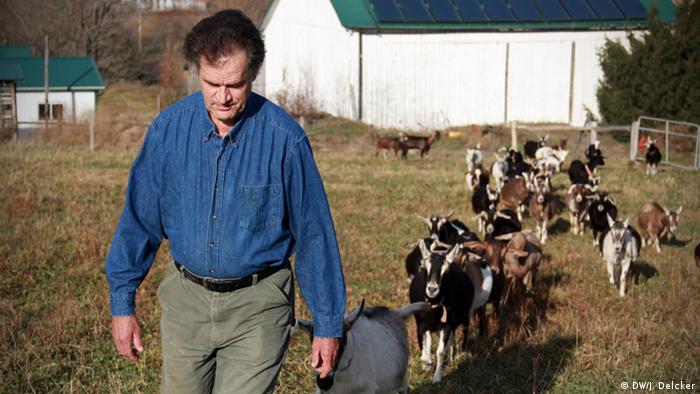 The US has a long history of extracting natural resources, including more petroleum and natural gas than any other country in the world. In Pennsylvania, gas production sites dating back to the 19th century can often be seen in the countryside.

In the early 2000s, natural gas production fell rapidly, and the only sure alternative seemed to be importing it, says Kevin Massy of the left-leaning Brookings Institute in Washington DC. But since imported gas is pegged to the price of oil and comes with significant transportation costs, international gas is much more expensive. Markets responded to that, Massy says, reaching record highs in the US.

Then came fracking - and, with it, a chance to take natural gas from the ground in places like the Marcellus Formation with lower costs.

"One of the things [gas companies] told [local residents] quite frankly was that it would help America be energy independent - that this would keep us out of foreign wars for oil. So they would tell that to the same families that send their children off to Iraq and other wars for energy," said Stephen Cleghorn, whose goat farm is located just a few minutes away from Jenny Lisak's blueberry field.

Driven by the prospect of high profits and a belief in American energy independence, numerous farmers and landowners leased the gas rights for their property, Cleghorn says. The price for drilling rights increased rapidly, even though little shale gas was extracted in most cases. People began to call it a bubble, and it soon burst. The markets recognized that all of the new gas fields were producing way too much for the American market.

And that's why natural gas prices quickly sank to a record low.

Nevertheless, gas production is continuing in Pennsylvania, and new production sites are being developed. The idea is to buy time.

"I've been told that much of the drilling going on is simply to hold the leases," said Stephen Cleghorn, who adds that the real process of fracking and extracting the natural gas isn't taking place.

Investors speculate that the price will soon go up again. Indeed, it has risen somewhat since the bubble burst. International factors have raised the price.

Since the Fukushima catastrophe in March 2011, Japan is more dependant than virtually any other land on importing the liquid gas, primarily from exporters in Qatar and Australia, who couple its price to that of oil. Japanese buyers must pay around five times the price for natural gas than those in the United States, where the cost of natural gas isn't pegged to oil.

European countries, including Germany, face a similar price scheme to Japan. The imports in Germany come in primarily by pipeline from Russia, and their price is largely tied to oil as well. 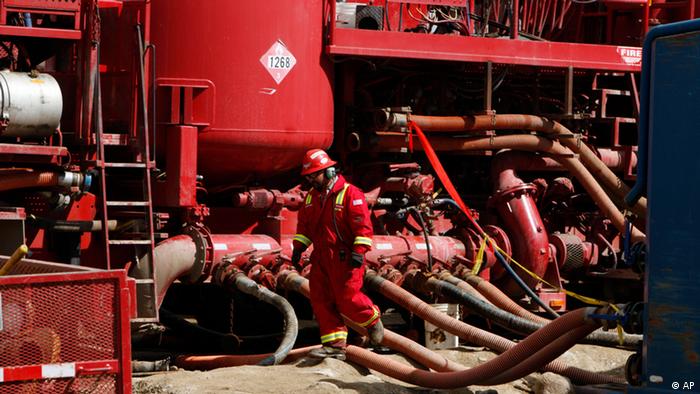 Some say fracking could change the trade of natural gas

The Fukushima disaster had consequences for Europe, too. Around two and a half months after the catastrophe, German Chancellor Angela Merkel bowed to pressure and announced that Germany would aim to be completely free of atomic energy by 2022. That means Germany will be more dependent on natural gas. Many analysts think this could lead to a leap in US exports, both to Japan and to European countries.

That would mean that a new and enormous player would emerge in the global natural resources market.

"What is happening is that the consumers of Russian gas are finding that they're having an alternative to Russian gas, and in some ways this is giving them more power in negotiations with the Russians," said Massey. "EON and RWE have successfully managed to renegotiate the terms of their gas purchases from Gazprom."

The gas boom in the US has already had an effect on the price of the resource in Germany, even though no natural gas has not yet been shipped there from the US. The interdependency of resource pricing means that the increased demand in Europe and Asia has also had an impact in the US. Fracking is taking place again near Jenny Lisak's and Stephen Cleghorn's farms thanks to the improved prospects for exporting it.

At the moment, the US can only export natural gas to countries with which it has a free trade agreement. But it would be ideal for American exporters to be able to send gas to countries like Germany and Japan. The US Department of Energy will decide by the end of 2012 whether it will open exports to such regions. Experts in Washington expect to see a decision in favor of more exports. The International Energy Agency (IEA) reports that by 2015, the US could top Russia to become the world's biggest gas exporter.

What would happen if that came to pass?

Kevin Massy believes that liquid natural gas from the US has the potential to radically change the trade of natural gas in the Pacific as well as in the Atlantic regions. The political expert does not think that would lead to a uniform gas price, but that it could strengthen buyers' position in the global energy market.

Germany, Japan and Washington are far from Jenny Lisak's home in western Pennsylvania. She's not interested in the global energy market - just in the welfare of her family, she says. A fracking site is supposed to open directly in front of her kitchen window, and so she's lodged a complaint with the Pennsylvania Department of Environmental Protection.

But outside, a truck rumbles by along the road, taking water away from a fracking well in the region. It doesn't look as if quiet will be returning to the area anytime soon.

Russia is expanding its position as gas supplier for Europe. By building the South Stream pipeline Moscow will reduce its dependence on Ukraine as a transit country ... and undermine the European Nabucco project. (06.12.2012)

Fracking on the agenda in US elections

Ten years ago few people had even heard of the energy extraction technique known as 'fracking.' Now the issue is set to play an important role for many US voters in the presidential election in November. (18.10.2012)