What we can learn from East German doping victim Andreas Krieger

Shot putter Heidi Krieger, now Andreas, was systematically doped in East Germany - an experience that influenced his gender identity. A film about Krieger shows why every sports fan should care about the doping issue. 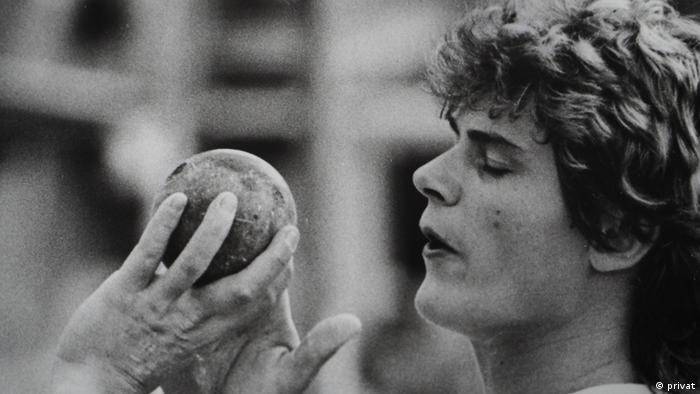 Russian athletes may be expelled from the Olympic Games in Rio, and a report from the World Anti-Doping Agency has confirmed that Russia has practiced systematic doping. Despite the recent headlines on doping, how many broken records will we expect to watch on live television when we tune in to the Games?

A recent film produced by Germany's National Anti Doping Agency and the United States Anti-Doping Agency shows that Germany is no stranger to systematic doping. It also drives home the role of the spectator when it comes to doped athletes.

The film, Heidi's Farthest Shot," tells the emotional true story of top-notch shot putter Heidi Krieger, who was a successful athlete in the 1980s in what was then communist East Germany. However, she was systematically doped without her knowledge - a common experience in the East German sports system.

Years later, Krieger faced a second challenge: He realized that he identified as a man and chose to live as Andreas. The forced doping, he says, deeply impacted his gender identity.

DW spoke with Dominic Müser, the film's producer and head of the Prevention Department at Germany's National Anti Doping Agency, about why Krieger's story is still relevant to both athletes and spectators today.

DW: Doping was widespread among athletes in communist East Germany, which is detailed in the film, "Andreas Krieger: Heidi's Farthest Shot." But the film is also a very personal testimony to the effects of doping. How did the film come about?

Dominic Müser: The film came about because I've known Andreas for a very long time. We've often met at doping prevention events, where he's shared his story. From the very beginning, his story touched and, due to the systematic doping by the state, also shocked me. So then we - the National Anti Doping Agency Germany, the United States Anti-Doping Agency and Andreas Krieger - decided to make this film.

The film combines two issues: doping and the transsexuality of Andreas, who used to be known as Heidi. What is the connection between the two issues?

The connection is that Andreas was doped without his knowledge - as a minor, which is a very important point. The effect it had on him is evident. It hasn't been scientifically proven that transsexuality can come about from doping, but it certainly can be a trigger.

Particularly during puberty, doping substances can function as a trigger and lead to gender identity issues, which can potentially lead to transsexuality.

Now, 27 years since the fall of the Berlin Wall, the issue of systematic doping in communist East Germany may seem obsolete. But doping is certainly still a problem today. The International Olympic Committee has banned some Russian athletes from participating in the Summer Olympic Games in Rio due to doping accusations. What's the real problem with doping?

The fundamental problem is that it's cheating. It is unfair to the competition and to the sport itself. Ultimately, doping destroys sports, because the essence of sports and their fundamental ethic are no longer observed.

On the other hand, doping also impacts the athlete on a personal level - both regarding health consequences and equal opportunity. With the recent doping cases in Russia, it's currently being discussed that there is still a lot to be done in this area. The issue of equal opportunity for all athletes will be with us for the next few years. 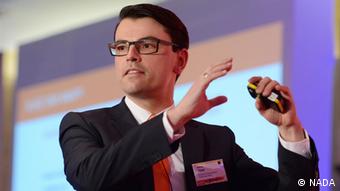 For NADA's Dominic Müser, film can be an effective tool in doping prevention

In Germany, as the National Anti Doping Agency, but also internationally, we are working to make sure athletes can complete in a fair and clean environment.

"They played God without including me or asking me," Andreas Krieger says in the film of the East German sports system. But he also clearly states that the doping problem is rooted in society, because spectators say they want clean sport but continually expect athletes to break records. How can we clear up this double standard?

I don't know how we can get rid of the double standard. In our prevention work, we start at a very young age and prepare athletes to deal with the topic. We explain the side-effects of doping and examine the issue from a societal perspective. We also speak with their parents, coaches and with everyone that works closely with athletes in order to bring about change.

But we live in an achievement-oriented society and high performance is expected. These values are reflected in the area of sports and athletes are under a lot of pressure.

One way to deal with the pressure is to offer alternatives and look at what an athlete can do if their sports career isn't successful. It's important for them to have skills in other fields and a good education, so they always have other options. That's important for athletes, so they don't feel forced to turn to doping.

Dominic Müser heads the Prevention Department at Germany's National Anti Doping Agency (NADA). He is also a member of the World Anti-Doping Agency's Education Committee and of the Council of Europe's Advisory Group on Education.

Could a soccer game bring peace to the Middle East?

What would happen if Israel and the Palestinian Terrorities solved their decades-old conflict with a winner-takes-all soccer game? A new Israeli-German film poses this absurd question - with entertaining results. (06.06.2016)

The dark side of world sports revealed in 'Dirty Games'

With his new film, director Benjamin Best looks into the dark abyss of the world of sports, focusing on the global games of soccer, basketball and boxing. Best tells DW about how it all comes down to money. (02.06.2016)

Watch the film and learn more about Andreas Krieger's experience as an East German athlete.