What the FBI wanted with photographer Jerry Berndt

Berndt was a political activist who photographed US social movements from the 60s to the 80s. His works are now on display in Hamburg.

If you didn't know that the black and white photos were taken around 50 years ago, you might think that they were taken only yesterday at a Black Lives Matter event or a protest against US President Donald Trump. The subjects in Jerry Berndt's striking images march the streets of the US to oppose racism, unpopular government decisions (such as waging the Vietnam War, in Berndt's case), or wave American flags.

The photography exhibition Beautiful America, on view in the Deichtorhallen Museum in Hamburg from September 25 until January 3, 2021, could hardly have been more timely.
Although the pictures were taken between the 1960s and 1980s, the themes that dominate US politics today – the fight for racial equality, concerns about China, police violence — are evident in Berndt's photographs. 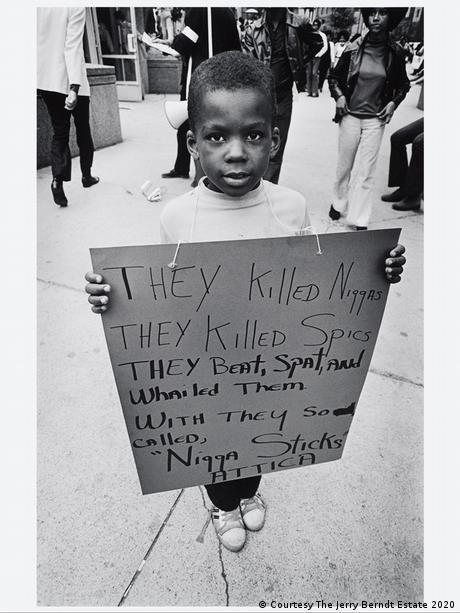 Berndt captured protests, including this one outside of Attica prison in New York state featuring a young boy

The racism that has long plagued the US is a prevalent theme in the work of the audacious photographer and activist.

Long before the Black Lives Matter movement, Berndt was on the streets of American cities documenting the fight for civil rights. One particularly haunting image shows a black youth protesting against the mistreatment of African Americans and Latin Americans in the maximum security prison at Attica, New York. Another picture in the same series shows a black man holding a poster saying: "Keep racist police out of the community."

According to the exhibition's curator Sabine Schnakenberg, Jerry Berndt had a good eye for accurately capturing the movements of his time. "He was very sensitive to social currents and injustices. That's why he was able to portray them so well," she told DW.

In the action at student protests

The exhibition in Hamburg features photos of numerous protest movements that took place in the late 1960s and continued through the 1970s. Most were directed against the Vietnam War and nuclear energy. In his youth, Berndt took part in these demonstrations and was an active organizer, writing speeches that caused riots and making films that encouraged strikes.

It was through participating in various social movements that Berndt began working as a photographer in the first place, says Schnakenberg. "He started taking photographs because he simply had to document what he stood for and lived for: the protests and being involved in those politically critical processes," the curator said, adding that because American media reports were often one-sided, Berndt wanted his photographs to reflect protestors' experiences. The photographer's lens not only captured the political currents of the time. They also showed everyday life in rapidly changing major US cities. Traveling back and forth between Detroit and Boston, Berndt documented city life, including the latter city's red light district. Many of the pictures from Beautiful America were taken in Detroit, although one might argue that there is little ostensible "beauty" in them: His pictures depict a onetime industrial stronghold undergoing urban decay.

Detroit's economic boom at the beginning of the 20th century came thanks to the automotive industry and car manufacturers like Ford, which made the city an economic powerhouse and employed millions.

As companies began to outsource parts of the industry, the once-wealthy city slipped into economic decline, reflected by mass unemployment, rising crime rates and civil unrest. White middle and upper classes moved to the suburbs, resulting in rapid population decline in the inner city. A city that once epitomized the American dream was now a grim posterchild for the shortcomings of neoliberalism. Although Detroit has undergone positive changes in recent decades, crime statistics show that it remains one of the most dangerous in the US. 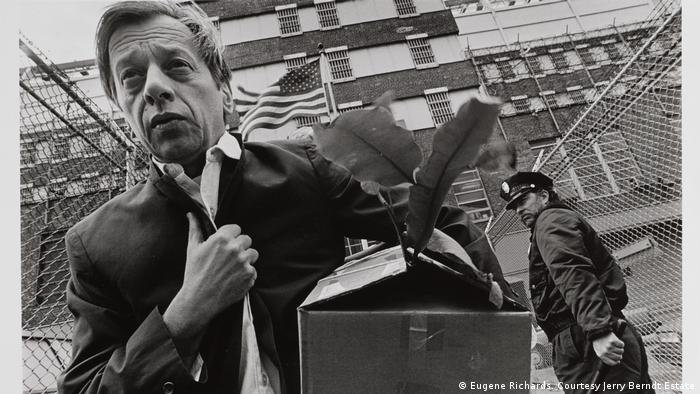 Observed by the FBI

Just across Lake Michigan in Milwaukee, Jerry Berndt grew up in a poor family. His grandmother had emigrated from Posen in East Prussia to the USA before the First World War, and his father ran a pub where he spent much of his childhood. Disease ran rampant, and his father struggled to pay the medical bills.

Nevertheless, Berndt became the first of his family to graduate from high school and taught himself to photograph  and make prints. Throughout his career, he traveled far and wide, including San Salvador (1984) and Haiti (1986-1991), to capture images of the living conditions of people living there. Later in life, as a war photographer, he documented conflicts in Armenia (1993-94) and Rwanda (2003-2004).

Jerry Berndt's life of political commitment also had negative consequences however: After he started chronicling anti-Vietnam War student protests, the FBI put him on their watch list. Undeterred, Berndt organized a trip to Cuba to cut sugar cane with Fidel Castro and was under surveillance by the agency upon his return.

According to the late photographer's biography, FBI monitoring made it difficult for him to maintain a job due to pressure the agency put on his employers. For Schnakenberg, the FBI files were of utmost importance. Thanks to them, more is known about Jerry Berndt today. He died in Paris in 2013.

While the exhibition "Beautiful America" shows Berndt's photographs taken between the 1960s and 1980s, the themes still echo strongly today.