What drives South Asians to peacekeeping?

Bangladesh, Pakistan, India and Nepal are among the top contributors to UN peacekeeping missions across the world. But what factors are driving these relatively poor nations to send troops to work under the UN flag? 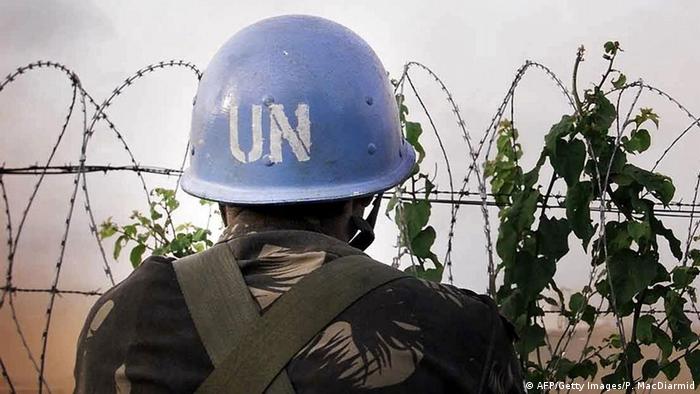 In a number of conflict zones across the world - stretching from Western Sahara to the Middle East - military experts, troops and police working under United Nations command are striving to foster peace and maintain order.

However, as the UN doesn't have its own armed forces, it relies on military and police personnel contributed by member states to carry out peacekeeping operations. A total of 71 such missions have been conducted since 1948.

But a closer look at UN peacekeeping reveals that troops from relatively poor, populous countries - mostly from Africa and South Asia - account for a huge proportion of the peacekeeping forces worldwide. For instance, Bangladesh, Pakistan, India and Nepal together contributed over 30 percent of the total number of UN peacekeepers worldwide in 2014. Western states by comparison contributed a mere five percent.

As of the end of November 2015, Bangladesh topped the list of global contributors to the 16 current peacekeeping operations with over 8,800 troops, police and military experts, according to UN figures. India ranked third (7,807), followed by Pakistan (7,636). Nepal ranked sixth (5362). Two African countries, Ethiopia (8,307) and Rwanda (6,075), ranked second and fourth respectively.

UN military personnel have varied peacekeeping responsibilities. They range from protecting civilian populations and safeguarding relief efforts to negotiating with local authorities or warlords the circumstances of their day-to-day operations, and coping with the constant threat of armed attacks. 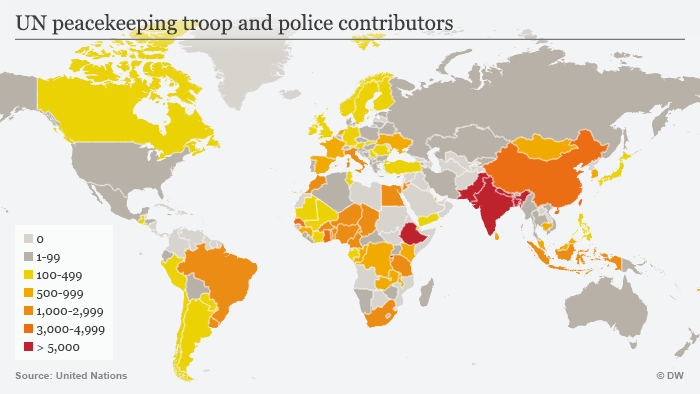 In recent decades, Western nations have been cutting back troop contribution to peacekeeping missions. At the same time, South Asia has been at the vanguard of committing troops for these activities. And experts point to an array of reasons - historic, economic and political - behind this development.

Waheguru Pal Singh Sidhu, an India expert and non-resident senior fellow at the Washington-based Brookings Institution, explains that, as part of the British Empire the Indian sub-continent provided the largest number of troops during World War I and World War II even before they were independent.

Following their independence after the end of WWII these countries retained their large standing armies with an expeditionary force capability that could deploy troops at relatively short notice.

Thus, South Asian countries had the necessary manpower and capacity to provide troops for UN peacekeeping. Moreover, says Sidhu, as these nations initially had little strategic interest in areas where UN peacekeeping operations were being undertaken (mostly in Africa), they were also able to exercise a greater degree of impartiality.

However, this is only part of the story, as Rohan Mukherjee, a research scholar at the Department of Politics in Princeton University indicates. Peacekeeping operations also pay well and are used by some countries to offset military expenditures to some degree. And although the economic benefit of committing a few thousand troops each year is relatively marginal for others, Mukherjee says, it is still greater for developing countries than developed ones.

This view is shared by Omar Hamid, head of Asia Pacific Country Risk at global analytics firm IHS. "The South Asian countries tend to have big armies, and it's very beneficial for them to send troops, as they are able to earn significantly more than their salaries in their home countries," Hamid told DW.

For example, says Hamid, a Pakistani soldier has a salary of around 20,000 rupees per month, give or take. This is about $200, but on a UN mission he can earn a daily rate of between $100-300. "In many cases, a three month deployment, tax free, can earn you a very decent nest egg," said the expert. These soldiers also get recognized as having been chosen to serve in the UN, which can further their career prospects in their own militaries.

Indian Army Col. Anil Raman, a veteran of the UN peacekeeping mission in Sierra Leone (UNAMSIL) confirms this. "Almost no officer or soldier refuses an UN assignment as it offers great financial rewards - for Indian officers and soldiers around 3-4 times the pay in addition to Indian salary, Raman told DW.

For officers, he added, general participation is desirable not only financially but also to boost prestige. "All officers who go on individual postings to UN missions are normally the very best of their cohort, so it is a sign that you are doing very well."

And from the point of view of the countries, says analyst Hamid, it keeps their troops gainfully employed. Also, analyst Sidhu noted that UN peacekeeping missions have provided an opportunity for South Asian forces to work with each other. (For example, Indian and Pakistani troops have often been deployed together in UN peace operations). 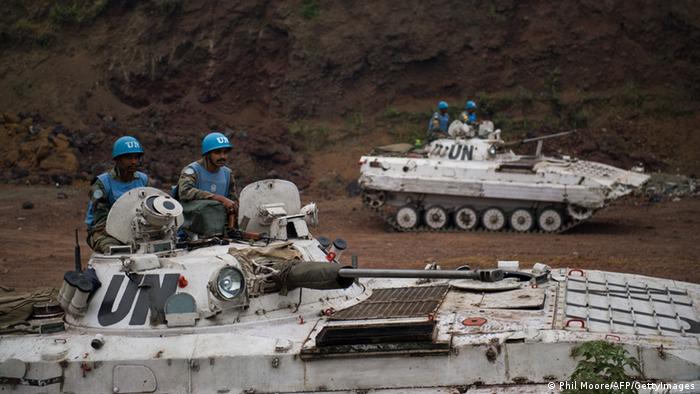 The economic benefit of peacekeeping is greater for developing countries than developed ones, says Rohan Mukherjee

Besides financial incentives, experts note, these countries gain diplomatic benefits by committing to peacekeeping operations. "It shows that they are committed to the UN," says Anit Mukherjee, an assistant professor in the South Asia Program of the Singapore-based S. Rajaratnam School of International Studies (RSIS).

"When these nations have an active peacekeeping profile, they enhance their image. They can argue that they are doing their part to help promote international stability," he said. And in the case of India, some analysts argue, part of the motivation may also be linked to the South Asian giant's aspirations as a global power. "New Delhi has often built its case for a permanent seat on the UN Security Council on the back of its contributions to UN peacekeeping," Princeton's Mukherjee told DW.

The UN has dismissed four staffers for distributing child pornography via the organization's email system. Another staffer was fired for transporting 173 kilograms of marijuana in a UN vehicle. (31.10.2015)

The UN General Assembly trims the agency's core budget for the next two years, with the aim of cutting waste. But UN Secretary General Ban Ki-moon laments the cuts. (25.12.2015)

An independent panel has rebuked the UN for 'gross institutional failure' to act on allegations that French and African troops sexually abused children at a camp near Bangui in the Central African Republic (CAR). (17.12.2015)

Analyst WPS Sidhu has a similar view. He argues that India's economic rise and the growing risks of peace operations, which are now increasingly tasked with protecting civilians, has underlined the need to align the objective of participating in peace operations with New Delhi's strategic interests. "India's increasing economic stakes in many of the countries that host UN peace operations further stressed this linkage," he told DW.

Michael Kugelman, a South Asia expert at the Washington-based Woodrow Wilson Center, also points out that by contributing to international peacekeeping these countries gain a foothold in regions where they'd like to deepen diplomatic and economic relationships, and build capacity and morale within their armed forces through ample training opportunities.

Moreover, says Princeton's Mukherjee, when South Asian soldiers are deployed as UN peacekeepers, they often gain in terms of training, experience with new technologies and combat techniques, as well as the ability to learn from other countries' military practices.

Analyst Kugelman added: "And best of all for these South Asian countries - many of them cash-strapped - is that the UN foots the bill."

However, not everyone believes there are always qualitative benefits. Sushant Singh, associate editor of The Indian Express newspaper, and a former UN military observer in Cote d'Ivoire, argues that troops are not necessarily better trained when serving in the UN given that the role of a UN peacekeeper is totally different to that needed in a conventional operation.

But regardless of any potential similarities with South Asia, the operational areas remain foreign to some South Asian troops who, according to Colonel Raman, struggle to cope with issues such as food, social adjustment, an unfamiliar cultural context, or develop health problems.

And then there are the differences in language. "Language is somewhat a barrier since the local language like Temne in Sierra Leone is not known to anyone in the UN contingent. However, since officers are fluent in English (especially in the Indian Army), it is not a problem in most places. In Francophone countries, however, English speakers face a functional issue," said Raman.

Apart from military personnel, South Asian nations also contribute election observers, civil reconstruction teams and development specialists. So it would be incorrect to argue that South Asia only sends its troops and not other resources, say experts. However, while some of these may be at the governmental level, others are deployed either through international NGOs or private sector, as Anit Mukherjee indicates. 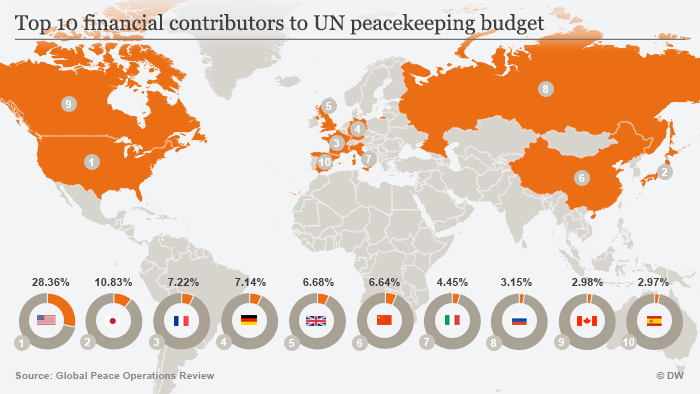 What about wealthier countries?

South Asia expert Kugelman says most rich countries - mainly Western nations - contribute to peacekeeping by making large monetary donations to the UN. "They will also say that their troops are fighting in combat roles through other arrangements, whether as part of NATO operations in Afghanistan or in coalitions targeting 'Islamic State,'" the expert told DW.

There are several reasons for this. First, there is no direct financial incentive for richer countries to deploy peacekeepers. Second, there seems to be a lack of domestic support in Western countries whose populations are concerned about the loss of lives of their troops, especially in areas where they do not have direct interest. Moreover, they are also reluctant to put their troops under UN command, which they sometimes consider sub-par.

But as Brookings analyst Sidhu underlines, this has led to a deep divide between countries that mandate and fund peacekeeping operations (the five permanent UN Security Council members (P-5) and large donors, such as Japan and Germany) and the biggest troop contributing countries - such as India, Pakistan and Bangladesh - whose personnel actually carry out the operations in the field.

"As the mandates have got tougher without a commensurate increase in funding or equipment, TCCs are demanding a greater say in making the mandates and more funding. This so-called gold versus blood contest has further stymied UN peacekeeping," Sidhu told DW. 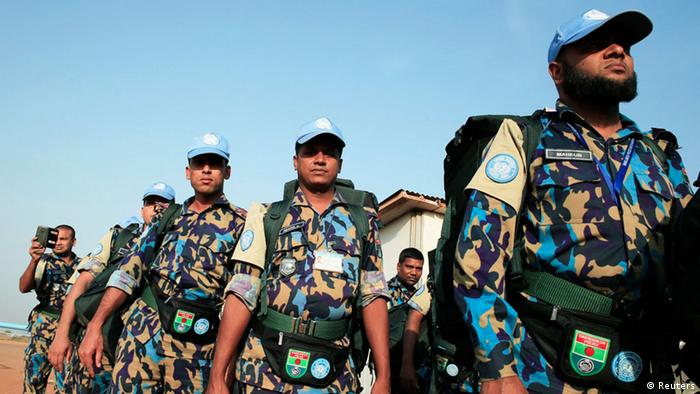 Like other soldiers in conflict zones around the world, UN peacekeepers also suffer fatalities. Nevertheless, the human cost for these four South Asian countries in UN peacekeeping missions has been relatively low, when compared to those suffered by the conflict-ravaged countries.

UN peacekeeping missions, regardless of who the contributors are, are not without controversy, however. For instance, the world body has come under fire for failing to adequately address the issue of sexual abuse by peacekeepers, which critics say frequently goes unpunished.