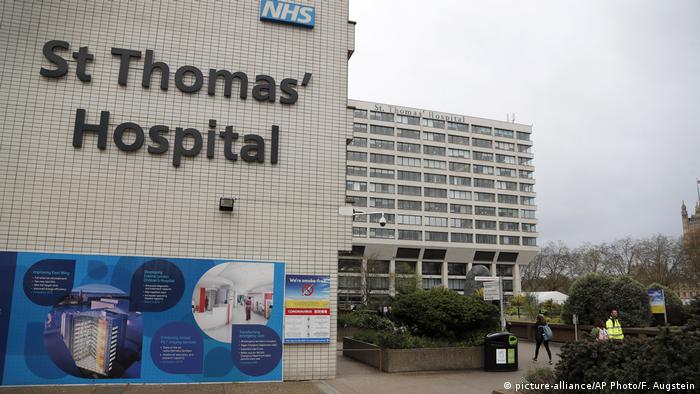 British Prime Minister Boris Johnson's spokesman said on Tuesday that Johnson was in a "stable" condition after being admitted to the intensive care unit at London's St Thomas' Hospital Monday evening.

"The prime minister has been stable overnight and remains in good spirits. He is receiving standard oxygen treatment and is breathing without any other assistance," Johnson's spokesman, James Slack, told a press briefing.

The 55-year-old was not put on a ventilator and has not been diagnosed with pneumonia, according to Downing Street.

Some patients with severe COVID-19 symptoms develop pneumonia, which is an infection of air sacs in the lungs that can make it difficult to breathe.

A ventilator is used in extreme cases, when the lungs can no longer breathe on their own.

Johnson was diagnosed with COVID-19 on March 27. Ten days later, on Sunday, he was admitted to the hospital with "persistent" symptoms as a "precautionary measure." He was brought to the intensive care unit late on Monday after his condition worsened.

UK Foreign Secretary Dominic Raab has taken over many of Johnson's duties while the prime minister receives treatment, including coordinating the UK's response to the coronavirus.

"In Cabinet we know what he wants from us and what he expects from us right now. I can assure the prime minister and we can reassure the public that his team will not blink, not flinch from the task at hand at this crucial moment," Raab said at a press conference Tuesday.

The UK does not have a deputy prime minister, and according to Downing Street, Raab's current role is to deputize for Johnson "where necessary."

Addressing concerns about the government's effectiveness while Johnson is being treated, the prime minister's spokesman said on Tuesday that the mood in the government was "determined," adding that officials were following a "clear plan" set out by Johnson for responding to the pandemic.

"Everyone is clear on what needs to be done."

However, later in the day, Gove revealed that he was self-isolating at home after a family member had shown COVID-19 symptoms. Gove said he did not have symptoms.

"He is not just a prime minister, he is not just our boss, he is also our colleague and he's also our friend," Raab said on Tuesday, adding that he was "confident" Johnson would be "back at the helm in short order." For now, Raab said, "we will keep all of our focus and all of our resolve ... on delivering the government's plan to defeat the coronavirus."

Queen Elizabeth wished Johnson a "full and speedy recovery" and sent a message of support to his family and pregnant fiancée, Carrie Symonds.

On Saturday, Symonds said she was "on the mend" after suffering mild COVID-19 symptoms, although she had not been tested or diagnosed.

An outpouring of well-wishes from world leaders followed news of Johnson's admission to intensive care.

German Chancellor Angela Merkel's spokesman, Steffen Seibert, tweeted on Monday that Merkel wished Johnson "much strength and a speedy recovery and hopes that he can leave hospital soon."

Every evening, DW's editors send out a selection of the day's news and features. You can sign up to receive it directly here.