The Whale and Dolphin Conservation Society has called for quiet, saying underwater noise poses a growing threat to the world's marine mammals. It says quieter ways of conducting business at sea are already at hand. 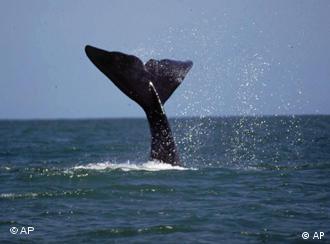 Marine mammals have more than whaling to worry about

Underwater noise is more than just pollution – it's a killer.

This is the message the Whale and Dolphin Conservation Society hopes to spread with "Sonar Sucks," a campaign launched in Germany this week to raise awareness of the impact of underwater noise on sea mammals. 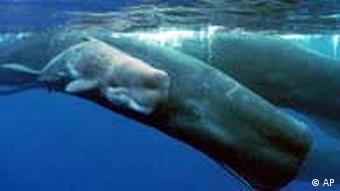 Sound travels more effectively under water than above

The Whale and Dolphin Conservation Society (WDCS) has called for a range of noise-fighting measures to be implemented, including an international moratorium on low- and medium-frequency military sonar equipment, and on oil and gas development of the Arctic region, saying underwater noise pollution created by those activities is putting entire aquatic populations at risk.

"It's the old fashioned out of sight, out of mind – the way that we used to talk about chemical pollution is now the way that we start to look at noise pollution," Mark Simmonds, the WDCS International Director of Science, told Deutsche Welle.

Whales, dolphins and porpoises rely on hearing for most of their basic needs: they use sonar to communicate, to orient themselves, to find food and mates.

Man-made noise can drown out the sounds the mammals rely on day to day with consequences ranging from loss of habitat to death – and according to the WDCS, that noise is increasing.

"The equivalent would be losing your sight and going blind for us … and worse, in some of the noisier areas," Simmonds said.

Noise disturbances can cause marine mammals to alter their behavior and abandon breeding and feeding areas, cause injury and lead to whales and dolphins beaching.

In a statement released by the German branch of the WDCS, the organization said that military sonar, marine construction and development, seismic exploration by the oil and gas industry, and the increasing number of ships in the world’s oceans are all helping to create an increasingly disorienting environment for the world’s cetaceans. 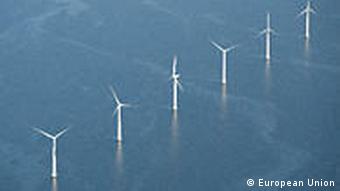 Offshore Wind parks generate noise during their construction, not operation

Animal welfare groups say the effect of noise on marine mammals has been well documented but that governments have taken little heed.

"As far back as 2004 an historic European Parliamentary Resolution called on the EU Member States to restrict the use of high-intensity sonar but sadly too little has been done," International Fund for Animal Welfare European Union Director Lesley O'Donnell said.

"EU member states have a clear obligation to protect whales and their habitats from ocean noise which can disturb, injure and even kill whales and other marine species even after it has travelled tremendous distances."

Human activities like construction and oil drilling can create noise levels over 260 decibels – louder than a rocket taking off – and because noise travels differently underwater than through the air, the effects can be felt even hundreds of kilometers from the source.

"Low-frequency active sonar from the military can range in distance from 1000 to 1500 kilometers [through water]," WDCS Germany Conservation Manager Karsten Brenning said.

"That would mean that if you would switch on (an equivalent above-water) device in Moscow, it would be difficult to have a conversation on German streets."

The WDCS pointed to increasing Arctic development and a growing amount of energy-related construction at sea as particular areas of concern.

Seismic studies, in which sound waves are used to provide information on potential gas and oil deposits on the ocean floor, are being undertaken in designated whale sanctuaries, including the Dogger Bank and the Moray Firth in the North Sea.

The latter may become home to a major wind farm if a recent proposal from consortium Moray Offshore Renewables goes ahead.

"There's a lot of development going on in the seas of Europe that hasn’t been going on before," Simmonds said.

"As people who are essentially environmentalists at heart we like renewable energy…but it’s the way that these things are being constructed and fixed into the seabed, the hammering, the pile-driving, this is a very loud source of noise." 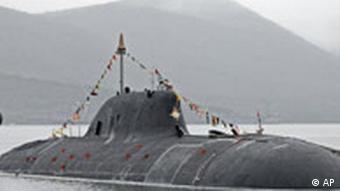 Increasingly stealthy submarines prove ships can be made quieter, says the WDCS

Simmonds pointed to the use of "bubble curtains" or "jackets" to disrupt the spread of noise that occurs when hammering pylons into place.

He also pointed to the great advances in submarine stealth technology that have been made, saying that these offered great cross-over potential for reducing the impact of ship's engines.

In terms of noise generated by surveys for resources beneath the seabed, Karsten Brenning suggested more focus on "passive" seismic surveying, which is more like listening to the seabed than bouncing sound off it.

"There are technological mechanisms coming along but we need more investment and more focus on those," Simmonds said.

Greenland's Inuit won a battle to extend their annual whale hunt to humpbacks at the International Whaling Commission's annual meeting. A decision on a proposal to end the global moratorium on whaling was postponed. (26.06.2010)