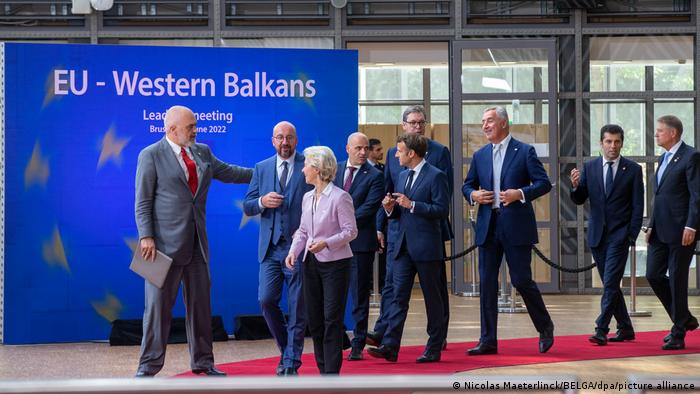 Western Balkan and EU leaders were meeting in Brussels

A draft of the summit statement showed that EU leaders would again give "full and unequivocal commitment to the EU membership perspective of the Western Balkans."

The leaders of Albania and Serbia attended the summit after they had briefly considered not going amid disappointment over the lack of progress on milestones to becoming EU members.

"We will keep going and working even harder to make Albania a nice EU member," Albanian Prime Minister Edi Rama wrote on Twitter after the meeting in Brussels.

Serbian President Aleksandar Vucic wrote on Twitter after the talks that his country would "fight" for an EU future for Serbia.

Speaking to reporters after the summit, North Macedonia Prime Minister Dimitar Kovacevski, said: "The Russian aggression on Ukraine is a threat to all countries in the region, and, in this context, European Union enlargement to the Western Balkan should be seen as a a necessity but also an investment in the security of the European Union."

EU member state Bulgaria has been blocking the start of the accession talks with North Macedonia and Albania, angering the two West Balkan states.

Albanian Prime Minister Rama slammed what he called Bulgaria's "kidnapping" of the applications and "destroying" the spirit of Europe.

Bulgaria has demanded that issues of "common history," language and identity be discussed with North Macedonia as a precondition for the accession talks, which North Macedonia's president, Stevo Pendarovski, said was "unacceptable."

"It is unacceptable that historical issues and language disputes are included in the negotiating framework with the EU," Pendarovski told Skopje-based TV24 Casa earlier this week.

It is also an issue for Albania because the European Union treats the countries' accession as a package.

Bulgarian lawmakers on Wednesday voted no-confidence in the coalition government of Prime Minister Kiril Petkov. The political crisis tarnished the hopes of Balkan countries that they would reach a resolution.

Dutch Prime Minister Mark Rutte said there might be a chance that the Bulgarian parliament could reconvene and support lifting the veto on North Macedonia.

"Nothing is ever easy on the Balkans. But I think there is a 50-60% chance you might see a breakthrough next week," he said.

What is the status of Western Balkans' EU membership bids?

The European Union got its start in 1951 as a bloc of six countries known as the European Coal and Steel Community, but has expanded over the years. It now has 27 member states.

Western Balkan countries, including Bosnia-Herzegovina, Kosovo and Montenegro, are at different stages of the application process for joining the EU.

Kosovo and Bosnia-Herzegovina have submitted their membership applications, but still haven't started negotiations.

Separately on Thursday, EU leaders granted candidate status for Ukraine and Moldova, the first step in a long process to become members of the bloc.

Ukraine's fast-track route to official candidate status is seen as increasing the Western Balkans' feeling of being sidelined.

Albanian Prime Minister Rama said: "Welcome to Ukraine, it's a good thing to give candidate status, but I hope the Ukrainian people will not have much illusions about this."