Local media in West Africa have a crucial role to play in keeping the population informed about the Ebola outbreak. But there is much debate over how they should be performing this task. 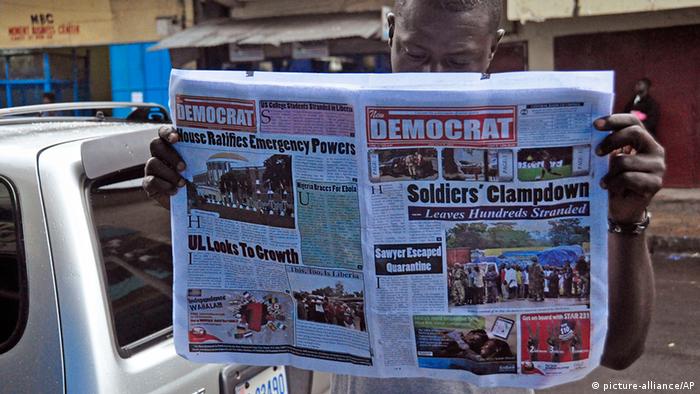 Tempers are wearing thin among many officials in countries affected by the Ebola virus. "Five Ebola Cases in Senegal" was the front page headline in the Senegalese daily "La Tribune" on Monday (11.08.20114). The Senegalese authorities did not only deny the story was true, they also arrested the paper's publisher Felix Nzale the same day for spreading false information. Yet there was at least one suspected case of Ebola in Senegal, but it was not confirmed.

Journalists in many African countries reporting on the Ebola epidemic are encountering pressure on several fronts. Commercial media houses face stiff competition as they scramble to turn out a steady stream of exciting, exclusive stories. "If you have a story like this, an epidemic of these proportions, you don't bury it somewhere in the back of the paper," said Ali Mohammad Ali, manager of the "Peoples Daily" in Nigeria. "It goes up front." 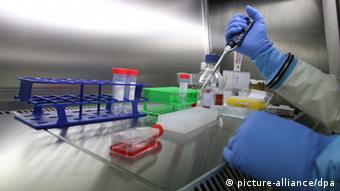 'If you have a story like this, you don't bury it somewhere in the back of the paper'

Too much emphasis on the dangers

Tension between the authorities and the commercial media would appear unavoidable, because governments have a habit of "trying to sweep as much as possible under the carpet," Ali said. But the media's job is to inform and to raise awareness so that the general public can protect themselves from the disease. "When we cover the story, we do it in graphic detail," he said.

Journalists, government officials, aid organizations and experts, such as Aliou Barry from Guinea who runs a civil society network in West Africa, emphasize repeatedly how important it is for local media to report on the epidemic. "There are still people around who refuse to believe that we are really facing an epidemic and the virus is spreading," Barry told DW. There is still a huge information gap that needs to be filled even months after the start of the outbreak. But Barry is dissatisfied with the way many journalists are covering the story. Their reports concentrate mostly on the dangers of the epidemic, but contain far too little information on how people can protect themselves. 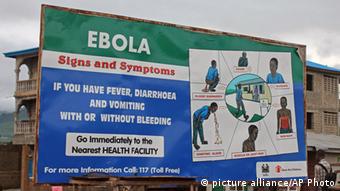 Elijah Grega is the director of Culture FM, a radio station based in Freetown, capital of Sierra Leone. He and his team of journalists have been trying to do justice to the Ebola story for months; endeavoring to live up to the numerous and varied expectations people have of their reporting on the disease. "There are, of course, other things happening, but we are concentrating on Ebola," Grega said. They broadcast several reports on the topic every day - a combination of the latest developments, politics and practical hints on how to protect yourself. On Wednesday (13.08.2014) there was a report on the lukewarm response from the international community. "Bearing in mind the seriousness of this epidemic, one should have expected huge donations," said Grega."We feel we have been left in the lurch." There is, however, a new website devoted to Ebola and other viruses explaining why and how they spread. There is also health advice as well.

Culture FM says it is not in the race to uncover and broadcast the most gruesome Ebola stories. "The population is already panic-stricken. We don't want to make things worse," Grega said. But even if Grega and his staff desist from spreading panic and stories that haven't been verified, there are still rumors that they cannot afford to ignore. One such rumor is that this latest Ebola outbreak originated in a US chemical weapons laboratory. "It is our job to investigate such things," said Grega, stressing that he had told his staff it was far from clear that there was any truth to this allegation.

The German government has urged nationals to leave three countries in west Africa affected by the Ebola virus. The outbreak has now killed more than 1000 people, including a second prominent physician in Sierra Leone. (13.08.2014)

Canada has said it is donating doses of an experimental Ebola drug to fight the ongoing outbreak in West Africa. The announcement comes after the World Health Organization deemed it ethical to use the untested drugs. (13.08.2014)

Ban Ki-moon has announced UN plans to fight Ebola. The virus currently has no cure or vaccine and has claimed 1,013 lives and infected a further 1,848 people since the latest outbreak's first death in March. (12.08.2014)