Philippine President Rodrigo Duterte has landed in Saudi Arabia as part of a week-long tour of the Gulf. The region's economic woes have seen thousands of Filipino expat workers sent back and owed unpaid wages. 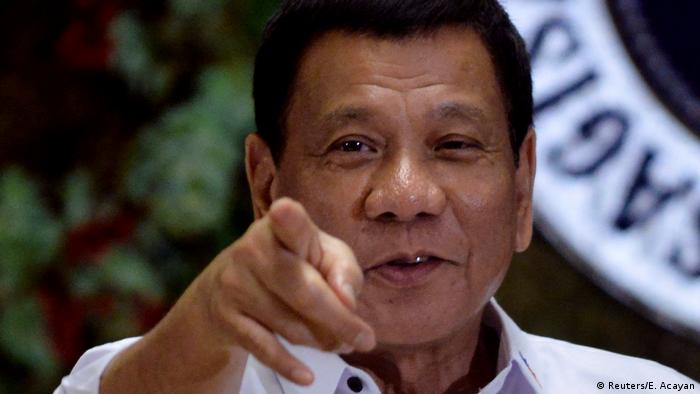 Philippine President Rodrigo Duterte promised on Monday that the welfare of expatriate Filipino workers in the Gulf will be the main focus of his week-long tour of the region.

Duterte landed in Saudi Arabia on Monday night to begin talks with Saudi King Salman. Some 800,000 Filipino workers work in the Gulf Kingdom. However, a 50 percent drop in the global price of oil since 2014 has created a gaping Saudi budget deficit. Last year the state found itself owing around $79 billion (74.5 billion euros), much of it to private firms in the construction sector contracted by the government.

Consequentially, many businesses in the kingdom - particularly in the construction sector - ground to a halt, which led to around 5,000 Filipino being forcibly repatriated with their wages still left unpaid.

"So many Filipinos were laid off," said Florante Catanus, vice-president of the All Filipino Community and Sports Commission, an umbrella group for Filipino firms in the country. "So they were sent home and they were not able to get money the companies owed them"

Catanus plans to present Duterte with a petition highlighting the plight of thousands of Filipino expat workers on Tuesday.

The Philippines president's tour will also take him to the kingdoms of Bahrain and Qatar, home to over 300,000 Filipino workers. Their welfare will again top the agenda of talks with King Hamad of Bahrain and Emir Sheikh Tamim bin Hamad Al-Thani of Qatar.

"He will discuss with these leaders matters relevant to the welfare and dignity of the Filipinos living in their countries, as well as explore avenues of economic and political cooperation," Assistant Foreign Secretary Hjayceelyn Quintana told reporters.

While around one in ten Filipino nationals have left the country to work abroad to find better employment opportunities and salaries, data released by the World Bank on Tuesday should assure the Asian country that it is on the right growth path.

The bank reported that the economy will grow 7 percent annually over the next three years, thanks mainly to the government's planned infrastructure projects that it says will spur business activity, create jobs and increase household consumption.

However, those strong growth spurts have come amid a violent government crackdown of drug addicts and peddlers. Some groups estimate that Duterte's war on drugs has claimed up to 7,000 lives since the President took office in June last year.