A prisoner at the Buchenwald concentration camp, Bauhaus designer Franz Ehrlich was ordered to make a gate with the cynical inscription "To each his own." An exhibition honors the resistance he infused in the design. 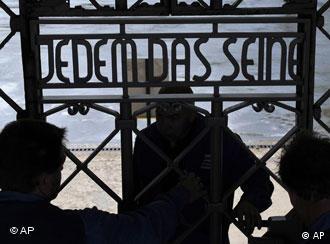 In 1938, the Nazi authorities at the Buchenwald concentration camp ordered prisoner Franz Ehrlich to design and create a gate with the inscription Jedem das Seine or "To each his own." The words were to face the inside of the camp to remind prisoners that their captors claimed the divine right to judge and murder at will.

Ehrlich was an architect and designer who had been a student at the Bauhaus school in Dessau from 1927 to 1930. When the National Socialists came to power in Germany in 1933, he became a communist and was arrested in 1934.

Upon arriving at Buchenwald, he listed his profession as "architect" and was frequently called on to manage building projects, including the remodeling of the camp commandant's private home.

Ehrlich followed the command given to him and built the gate - but designed the lettering in distinct Bauhaus style.

Buchenwald Memorial Center director Volkhard Knigge said the deliberate allusion to the modern art movement - which was despised and rejected by the Nazis - was a clear act of resistance on Ehrlich's part.

He was one of the few anti-fascist resistance fighters in the Bauhaus movement who "didn't give up or let himself be broken," Knigge told the dpa news agency. 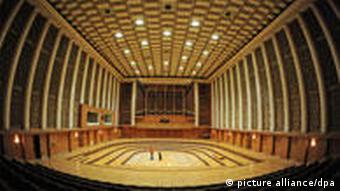 A replica of the Jedem das Seine gate forms the centerpiece of an exhibition that opened this week at the Buchenwald Memorial Center and coincides with this year's 90th anniversary of the Bauhaus school.

Ehrlich's works are highlighted in the exhibit, but the display presents a total of 61 Bauhaus designers who participated in the resistance movement under Nazi rule - a segment of the opposition that has received little attention thus far.

Ehrlich was released from Buchenwald in 1939 and forced to work in the office of the Nazi SS security force. In 1943, with German troops badly weakened from the two-front war, he was sent to fight for the Wehrmacht in the Balkans, where he spent some time as a prisoner of war.

After World War II had ended, Ehrlich returned to Germany and was responsible for the reconstruction of the city of Dresden, which had been badly destroyed by Allied bomb raids toward the end of the war.

Other works by Ehrlich are on display, including a stylized guillotine, which he created in 1939 while imprisoned in Buchenwald as a memorial to those who suffered in the Nazi camp.

The exhibition concludes with a media installation featuring the radio broadcast station in Berlin that Ehrlich - one of the leading architects in communist East Germany - designed in 1956.

Admission to the exhibition in Weimar's Neues Museum is free of charge; it runs through Oct. 11, 2009.

The former East Germany made significant contributions to modern architecture. Today, they would be historical landmarks full of insights into life in the GDR. But many have been lost. (31.07.2009)