Jewish refugees put their own twist on Bauhaus homes in Israel | Culture | Arts, music and lifestyle reporting from Germany | DW | 01.04.2009

Jewish settlers from Germany helped shape Tel Aviv's cityscape in the early 20th century. They aimed for utilitarianism and borrowed from Bauhaus, a modern design movement which marked its 90th birthday on April 1. 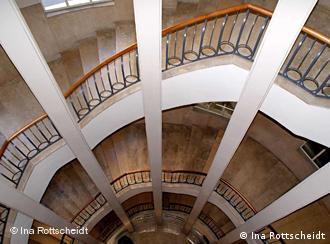 Germany's Jews had to leave their country, but they brought their architecture with them

Shlomit Gross loves her city. The co-founder of the Bauhaus Center in Tel Aviv shares her enthusiasm with the groups of tourists she takes through Israel.

Most of them want to see Jerusalem, Haifa or Lake Genezareth. Unfortunately, only very few are aware that Tel Aviv has one of the largest collections of Bauhaus buildings in the world.

"I think it's interesting that an architectural style was imported to Israel from another country," said Gross. "And it suits us. Tel Aviv is a modern and quite secular city, in comparison to other cities in Israel."

And that's exactly what the founders were after when Tel Aviv was born in April 1909: a modern, Jewish city.

Settlers brought their own building supplies

A particularly large wave of immigrants came to Tel Aviv in the 1930s, after Adolf Hitler came to power in Germany in 1933. Their fingerprint is still evident in the city, for example in the shiny, dark brown tiles on the facades of the houses. 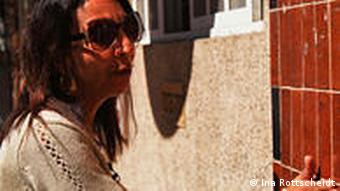 The immigrants brought tiles from Germany

"The Jews couldn’t take any money with them; that was forbidden by the Nazis," said Gross. "But they were allowed to buy things. And since they knew that they would have to build houses, they bought these tiles and brought them along."

Tiles, doors, windows -- the Jewish refugees brought all kinds of building materials from Germany with them and incorporated these elements into the Bauhaus style that they also imported. Many well-known artists and architects were among the emigres, like Arieh Sharon, Richard Kauffmann and Erich Mendelsohn.

"When you think about the era they were coming from, and that Art Deco really wasn't that long before, where everything was decorated with ornaments and nice curvatures," German architect Martin Sinken told Deutsche Welle.

"And then a new school comes along and says, we don't need any of that anymore. We need sensible houses for the people, sensible lighting and we're getting rid of the symbols of representation. We're getting rid of stylistic idioms. And that continues to have an influence today."

On Rothschild Boulevard or Diezengoff Street in Tel Aviv, cubist design is juxtaposed with round, vibrant forms. Some buildings have sparkling, flawless white facades, while the stucco is crumbling off of others.

Architecture adapted to the new country

The different climate and lifestyle in Israel forced many of the European immigrants to rethink their designs.

"There are horizontal slits in this balcony," said Gross, pointing to a house. "The idea was to let the air through. The people came from Germany, where it's cold, and here it gets really hot in August, so they wanted to adapt the houses to the climate."

Little by little, the emigres shaped their own Bauhaus style. The roof, for example, belonged to everyone in the apartment building. Laundry was hung to dry, or the residents would hold parties there on warm summer evenings.

The communal roof concept fit not only the weather, but also the socialist ideology many had brought with them. They wanted to create a new society where wealth was fairly distributed and everyone the right to lots of light and air in their living environment.

"They thought things were more comfortable with more space," said Gross. "People were the focus. That was the most important thing. Later it became more important to build lots of houses to make more money."

Today there's little evidence of Bauhaus' mid-20th century zenith in Tel Aviv. The facades suffer from the heat and exhaust emissions from the streets, massive air conditioning units clutter the building fronts and many of the balconies have been closed in. 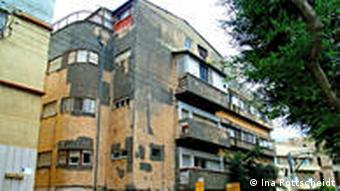 Some of the Bauhaus buildings are in dire need of renovation

For many years, the city showed little interest in its architectural heritage. That changed in 2003 when UNESCO added the some 4,000 Bauhaus buildings to its Cultural Heritage list. However, neither UNESCO nor the city funded renovations.

"It costs around $250,000 to renovate one of these houses and the apartment owners have to do the renovations," said Gross. "That's why they sell the roof to the property holders and use the money for the renovation. The buyer then gets to add on two stories to the building."

For this reason, many of the houses now have five stories instead of the typical three. The more historical houses are renovated, the more expensive the city is becoming. What was once intended to be a community for everyone is now restricted to the few who can afford it.

"There are people who say that Tel Aviv will one day be a city for the rich," said Gross.

Bauhaus, the modern design movement that originated in the eastern German city of Weimar, marks its 90th birthday on April 1. Celebrations will include a special exhibition at the city's Bauhaus Museum. (29.03.2009)

Interbau: The Modernization of Germany

The international architecture exhibit Interbau, which opened on July 6, 1957 in Berlin's Hansa neighborhood, came to be seen as a tangible example of Germany's modernization and a side effect of the Cold War. (06.07.2007)