South Africa might be the special focus at this year's Berlin film festival, but the continent's movie industry epicenter seems to lie further north: Thousands of low-budget pictures are released in Nigeria every year. 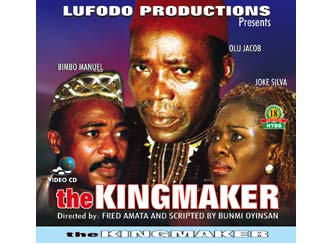 When Hollywood star Charlize Theron recently told reporters that it took just 28 days to shoot her latest film, "Monster," an appreciative murmur went through the room. Any Nigerian filmmakers present must have chuckled a little -- shooting a movie in five days sounds about right to them.

"I've made 25 films over the last five years," Charles Novia, a Nigerian director and producer, told his audience at a panel discussion on "Nollywood," Nigeria's booming movie industry in Berlin this week. Equipped with a video camera, a script and often as little as € 5,000, Novia and his colleagues churn out up to 50 feature-length films every week.

"Sometimes people sell their cars to start a film," said Peace Fiberesima, another producer and director. Others borrow money from relatives or friends or call colleagues who owe them a favor to help out for free, she added.

Video's the way to go

The video boom came after Nigeria's movie theaters started losing customers during an economic downturn in the 1980s. While many of the theaters have now been turned into churches, about 200,000 people earn their money through working for the movies. Estimates of the industry's revenue range from €95 million ($121 million) to €680 million.

"I didn't believe what they were telling me," said Dorothee Wenner, who works for the Berlinale's international forum and organized the two-day event at Berlin's Hebbel am Ufer theater. "In the end, I came back (to Germany) and found out that I wasn't the only one who didn't have a clue." 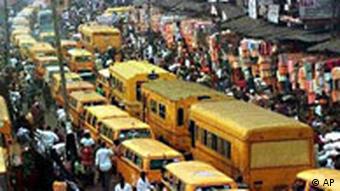 Pedestrians push their way through a traffic jam in downtown Lagos.

Nollywood booms without government funding. In fact, Nigeria's movie industry, which is centered in the country's former capital, Lagos (photo), pays the government about €3.5 million per year to censor its products, according to Fiberesima.

"I don't think anyone from the West can understand what it's like to build an industry without any help from the state," said Brenda Goldblatt, a South African filmmaker who recently made a documentary on Nollywood. "These films are companions in life for people. In the West, there's nothing like the depth of the relationship (between viewers and movies)."

Movies people can relate to

What's produced looks a lot like Latin American telenovelas and has little to do with Hollywood blockbusters. Viewers seem to like it that way. Renting American-made films in the video stores costs half as much as Nollywood productions, but the imports still collect dust on the shelves. "Most Nigerians don’t want to watch 'Terminator 3,'" Fiberesima said. "They want to watch 'Real Love' or 'True Love' or 'Saving Alero,'" she added, referring to recent Nigerian releases. 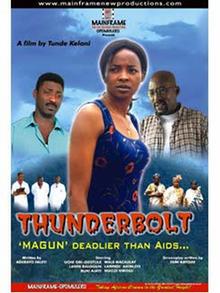 Unlike Bollywood films -- melodramatic productions from India -- not all Nollywood movies are similar, as Fiberesima, Amata and their colleagues are eager to point out. "It's not a style of making films, it's the Nigerian market for films," said Jeta Amata, a 29-year-old director, producer and actor who has already made 40 movies. He added that all he wants to do is entertain his countrymen.

"It's a cultural thing of appreciating home," Fiberesima said, adding that Nigerians can relate to the stories about crime, love, sex, and power which are set in their neighborhoods. While some films focus on rituals and myths from a specific ethnic group, "most of the films talk to everybody," she said.

In nearly 75 years, the Oscar for best international film has only gone to an African production three times and a Bollywood production has never won. Europe dominates the category. Why?

Ritual killings for money have increased in northern Nigeria in recent weeks. According to information and culture minister Lai Mohammed, most of those cases are influenced by Nollywood movies. Some ritual killers even claimed that Nollywood movies and social media-inspired their actions. And in Malawi, the killings of persons with albinism have also been attributed to Nollywood.