Was St. Corona the patron saint of epidemics?

The little-known saint, whose feast day is May 14, is celebrating a comeback. To find out St. Corona's story, DW got in touch with the Aachen Cathedral, as it exhibits a reliquary said to contain her bones.

The coronavirus pandemic that has already killed hundreds of thousands of people worldwide is the reason that all of a sudden, people are aware of a Christian martyr believed to have been tortured to death by the Romans about 1,800 years ago. Her name: Corona — which means "crown" in Latin.

Aachen Cathedral, in western Germany, has just put on display in its treasure vault an elaborate reliquary believed to contain some of St. Corona's bones.

Long before the outbreak of the pandemic of the same name, the cathedral planned for an exhibition this summer displaying its precious gold craftmanship, and the freshly cleaned gold, bronze and ivory Corona shrine that was hidden from public view for 25 years was to be the highlight.

"We have brought the shrine out a bit earlier than planned," Aachen Cathedral spokeswoman Daniela Lövenich told DW, adding that since there are few tourists at present and access is limited, interest has been low-key.

The mighty 9th-century cathedral is the burial place of Charlemagne, the first holy roman emperor, who died in 814 A.D.; it is also where many German kings and queens were crowned. It remains a prominent pilgrimage church to this day. 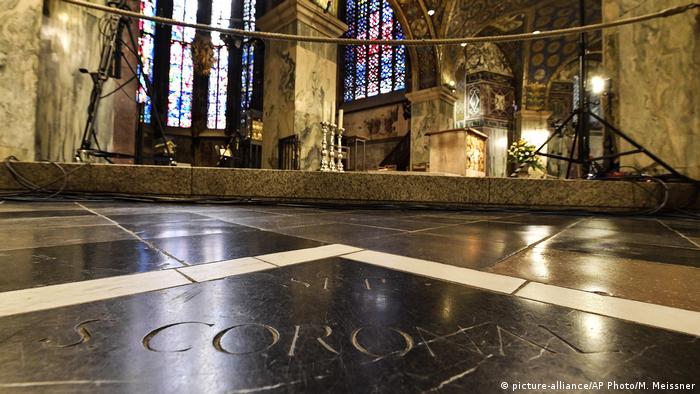 For hundreds of years, the Corona relics were stored underneath this massive marble slab

King Otto III brought Corona's relics to Aachen in 997. They were initially kept in a tomb underneath a slab on the cathedral floor for hundreds of years before they were moved to the shrine in the early 20th century.

"Our interest in St. Corona comes more from an art history point of view," Lövenich says. She was hardly known as a patron saint at all in the area, unlike in Bavaria and Austria, where St. Corona is still revered in some parts, the spokeswoman said. 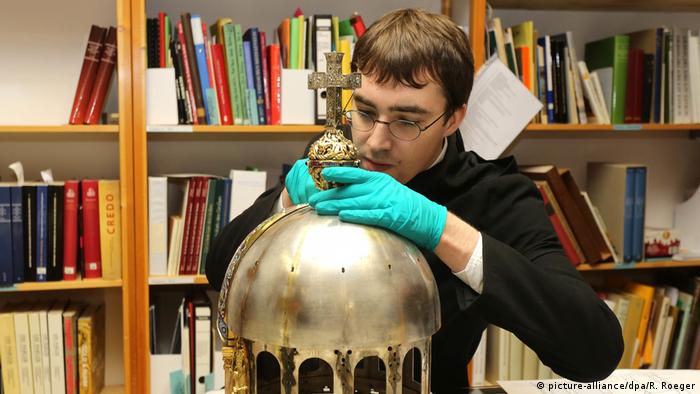 A student painstakingly cleaned the precious reliquary for three months

St. Corona is commonly thought to be the patron saint of butchers and treasure-hunters, prayed to in times of financial hardship. But some church representatives say she is also, at least locally, the patron saint for warding off infectious diseases.

People in the small Austrian town of St. Corona used to pray to the saint in difficult times, including to protect their livestock from contagious diseases, Lövenich says. But, she adds, that was very much a local phenomenon — one that has recently caught the attention of the media, as St. Corona, "patron saint of infectious diseases," is indeed a striking title for the times.

In the current pandemic, St. Corona may not be the go-to saint to ward off disease, but who knows, the faithful may just turn to her regarding money matters, as millions are also left jobless by the crisis.

Germany's top Catholic body has repudiated a warning by several high-ranking church figures that the coronavirus crisis is a pretext for creating a world government. Such conspiracy theories are rife on social media. (10.05.2020)

Bamberg's old town center, Aachen Cathedral and the Bauhaus in Dessau – all are UNESCO World Heritage sites. With our new "DW World Heritage 360" app you can explore them in a completely new way. (18.03.2019)