Millions of tons of poisonous gas, fire bombs and ammunition continue to rot in the waters off the coast of Germany. They contain deadly toxins, which are seeping into the environment. 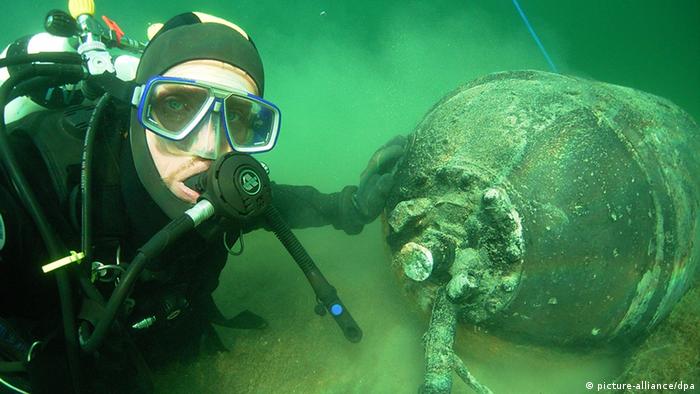 Tourists on the Baltic Sea island of Usedom often collect light-colored rocks on the beach. Thinking these are pieces of amber, they drop them into their pockets and stroll on. But these are not amber stones - they are pieces of phosphorous, which easily catch fire. In the past four decades, about a hundred people have been burned this way.

In 1943, during a British air raid on a German military site, thousands of bombs were dropped on the port village of Peenemünde. Many of these were bombs that contained phosphorus and about 40 percent missed their target and landed in the sea. They have been rotting beneath the water ever since. About 65 bombs are discovered on Germany's coastlines each year. 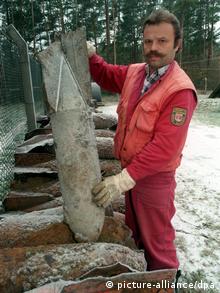 Examples of retrieved, old munitions found near Usedom in the Baltic Sea

"Between two and four of those will lead to injuries," says Claus Böttcher from the state environment ministry of Schleswig-Holstein in Kiel. "And, it's on the increase."

Böttcher worked on an in-depth analysis of munitions off Germany's coastline conducted in 2011.

In order to prevent weapons from falling into the hand of the enemy - or sometimes on the orders of occupying forces - Germans dumped their own munitions in the sea as well. Some estimates say two million tons of munitions were submerged.

In addition to bomb and other explosives, large amounts of poisonous gas were also dumped in the sea. German researchers say the discarded stockpiles include chlorine, phosgene and mustard gas. They estimate that 220,000 tons were disposed of in the North Sea and 65,000 tons in the Baltic.

After spending 70 to 100 years underwater, the condition of the gas containers sitting on the seabed is quite varied.

"Many metal drums are still intact, others have corrroded completely and some containers are simply found empty on the sea floor," says Jens Sternheim from the Schleswig Holstein environment office.

Researchers are convinced that dramatic releases of toxic chemicals in the future are unlikely. But gradual leaking of poisonous elements continues all the time.

According to munitions expert Tobias Knobloch from the Federal Maritime Agency in Hamburg, repeated testing of the North and Baltic Sea has shown no significant evidence that toxins are making their way into the food chain.

But as Germany's offshore wind farm industry continue to grow, the buried munitions are getting in the way. Areas where underwater cables or wind turbines are planned, need to be cleared. This slows down construction work and increases the price of wind farm construction. 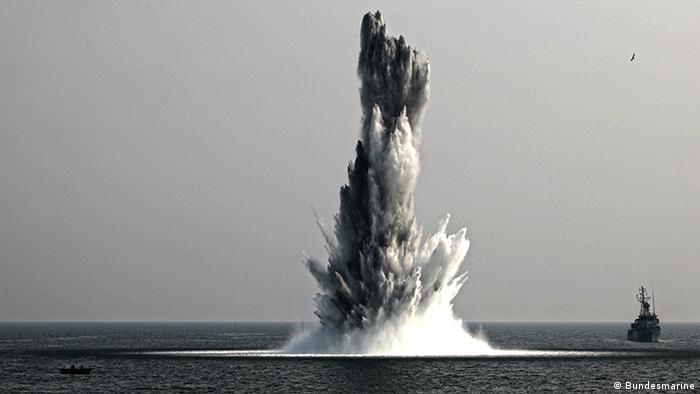 A thing of the past? An old, submerged bomb is exploded in the Baltic Sea

"Due to the state in which the munitions are in, and the difficult conditions under the water, the experts often have no choice but to explode the old munitions," says Jürgen Kroll from the State Office of Criminal Investigation in Kiel.

The international governing body responsible for protection of the Baltic Sea (HELCOM) has now set up an expert group to assess the problem. They are currently compiling information on buried munitions across the area. They also deigning a strategy for dealing with the problem in the future.

Since exploding submerged munitions is both distructive and releases chemicals into the water, the Fraunhofer Institute for Chemical Technology is now looking for an environmentally sound solution. Unfortunately, political support for this project has been relatively lackluster.

At least one person has been killed after a bomb dating back to World War II went off near the western German city of Bonn. The explosion was reportedly triggered by an excavating machine. (03.01.2014)

Two US fighter jets have jettisoned unarmed bombs in Australia's Great Barrier Reef Marine Park during a training emergency. Officials say, however, that they pose no danger to the public or the environment. (21.07.2013)