Bosnian Croat war criminal Slobodan Praljak used cyanide to kill himself in court, Dutch prosecutors have said. Prosecutors are probing how he managed to get hold of a banned substance in the high-security UN building. 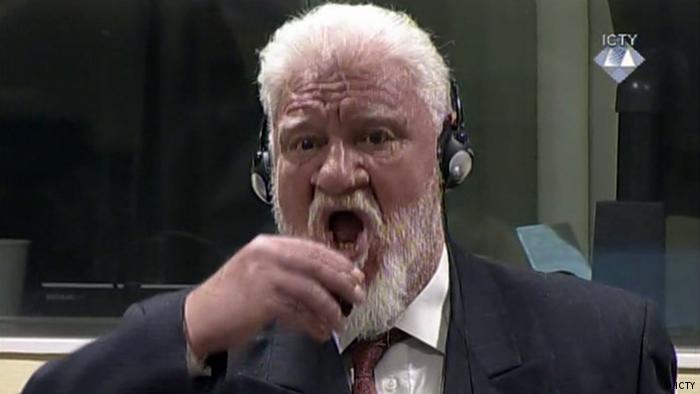 Preliminary results from a toxicological test on Friday have revealed "a concentration of potassium cyanide" in Slobodan Praljak's blood, the Hague Public Prosecutor's Office said in a statement.

On Wednesday, Praljak drank from a small bottle that he said contained poison seconds after an appeals judge at the UN's International Criminal Tribunal for the former Yugoslavia confirmed his 20-year sentence for crimes during the 1992-95 Bosnian war.

He was pronounced dead at a nearby hospital a short time later.

Potassium cyanide, a highly toxic substance, is lethal on ingestion in amounts of 200-300 milligrams.

"This resulted in a failure of the heart, which is indicated as the suspected cause of death," the prosecutors' statement said.

The UN tribunal launched its own independent review into the death earlier on Friday. 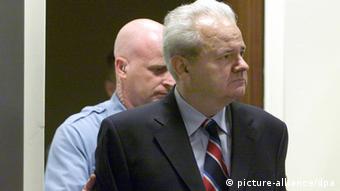 Milosevic died in his tribunal cell in 2006

The tribunal's review will begin next week and will be led by Hassan Jallow, a former prosecutor with the UN's Rwanda war crimes tribunal.

It expects to file a report by the end of the year, when the tribunal formally closes, having completed all its cases.

A similar internal review was initiated after the death of Slobodan Milosevic, the former Yugoslav president who died in his tribunal cell in 2006 before judges could deliver a verdict in his trial. Doctors concluded that he had died of natural causes.

Earlier, Croatia's justice minister raised doubts about whether security and medical staff at the tribunal had responded quickly enough after Praljak drank the poison.

Two Croatian experts observed the autopsy on Praljak's body at the tribunal's request.

Praljak and five other Bosnian Croat leaders were given long prison sentences for an ethnic cleansing campaign against Muslim Bosniaks during the 1992-95 Bosnian war.

The UN's Yugoslav war crimes tribunal has ordered an independent probe into Slobodan Praljak's suicide. The Bosnian Croat ex-general swallowed what he said was poison in the courtroom and died soon after. (01.12.2017)

Opinion: A deadly exit and a glimmer of hope in The Hague

It couldn't have been more dramatic. The convicted war criminal drinks poison in the middle of the court room, dying a short time later. Even The Hague Tribunal's achievements can't overshadow that, says Zoran Arbutina. (29.11.2017)