Volkswagen's top researcher warned Saturday, July 19 that pure electric cars would not became a major product for decades, because they continue to be thwarted by battery technology. 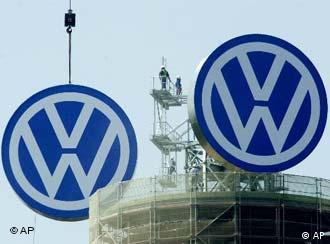 Volkswagen won't be going over to electric for some time, says its chief researcher

In an interview with DPA news agency in Wolfsburg, he deflated predictions that millions of people would be driving electric cars by the middle of the 2010s as "very optimistic."

Leohold said Volkswagen would sell electric models, but cautioned, "It will take 20 to 25 years before electric cars achieve a market share of more than 10 per cent." Volkswagen's first electric car would be a small car due out in 2010, but bigger ones might follow.

"We have an ambition to electrify more than just the really small cars, but also our main model series, the Golf," he said.

Leohold said research into lithium-ion batteries had made big jumps, but the items were still far too expensive.

He said electric motors would never replace internal-combustion engines in some sectors, such as long-distance heavy trucks.

"At the moment it is inconceivable they could ever be powered by batteries," he said, adding that there was still major potential to make petrol and diesel engines more efficient.

Separately, the German weekly magazine Focus reported Saturday that a key aim behind a takeover bid from German ball-bearings company Schaeffler for tyremaker Continental was a plan to jointly develop electric and other energy-saving engines.

In a report to appear Sunday in the newspaper Welt am Sonntag, Continental chief executive Manfred Wennemer opposed the takeover but said he welcomed Schaeffler owning up to 20 per cent of his firm.

"We should get together and come up with a sensible solution," he said.

German luxury carmaker BMW has announced that it is preparing to launch a test series of electrically-powered Minis. If they pass muster, the vehicles would reportedly be bound for the green US state of California. (11.07.2008)