The US Department of Justice has announced that Volkswagen will plead guilty to three criminal charges and pay a record $4.3 billion in fines. The US will also charge six VW executives for various crimes. 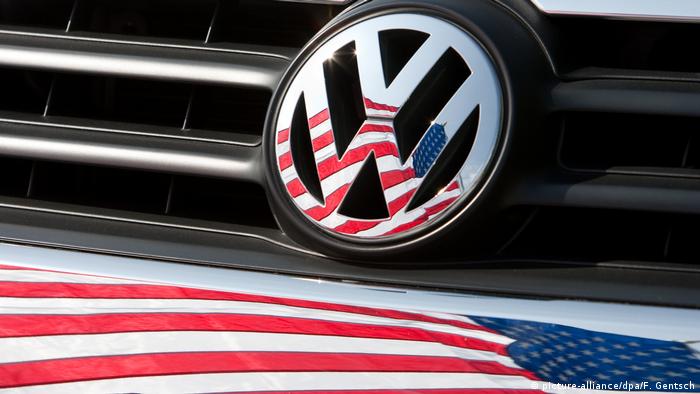 VW close to 4.3-billion-dollar emissions deal with US

Volkswagen looks set to pay 4.3 billion dollars in a settlement with the US Justice Department over its diesel emissions scandal. The German carmaker's board will examine the potential deal on Wednesday. (10.01.2017)

Germany's biggest carmaker is now the world's biggest. Volkswagen appears to have wrested the title from Toyota, despite new developments in the ongoing scandal that has tarnished its reputation. (10.01.2017)

The US Department of Justice said on Wednesday that Volkswagen AG (VW) has agreed to plead guilty to three-count felony of misinformation, including conspiracy to commit fraud, obstruction of justice and entry of goods by false statement.

US Attorney General Loretta Lynch said the German carmaking giant is charged with conspiring to defraud the United States and the company's US customers, as well as conspiring to violate the Clean Air Act by using devices on its diesel vehicles that evaded emissions standards.

VW will also pay a record $2.8 billion (2.6 billion euros) in criminal fines and $1.5 billion in civil fines. The company has already agreed to additional settlements with car owners, dealers and for environmental cleanup to the tune of $17.5 billion.

The outlines of the deal were revealed by VW on Tuesday.

The United States will also charge six VW executives and employees for their roles in the nearly 10-year conspiracy - including Oliver Schmidt, who was in charge of VW's environmental engineering office in Michigan.

Volkswagen admitted that between 2006 and 2016 six unnamed supervisors agreed to mislead regulators and customers about the standards of its diesel emissions.

The Department of Justice also said that in 2012 VW officials instructed engineers to destroy a document that detailed the cheating, while lawyers prodded employees to destroy other documents.

As part of the settlement, VW agreed to make significant reforms and will face oversight by an independent monitor for three years. The deal's documents, which were filed in US District Court in Detroit, reveal that the company could have paid as much as $34.1 billion in criminal fines.

In September 2015, the German carmaker admitted to installing secret software in hundreds of thousands of diesel cars to cheat exhaust emissions tests to make the vehicles appear cleaner than they were on the road. As many as 11 million vehicles could have similar software installed worldwide.

The "Dieselgate" scandal led many of the company's senior management to resign, including chief executive Martin Winterkorn. Winterkorn is due to appear before a special German parliamentary committee investigating the scandal on January 19.

The agreement must still be approved by US District Court Judge Sean Cox in Detroit.