Violence surges in eastern Ukraine amid reports of Russian involvement | Europe | News and current affairs from around the continent | DW | 22.12.2016

Violence surges in eastern Ukraine amid reports of Russian involvement 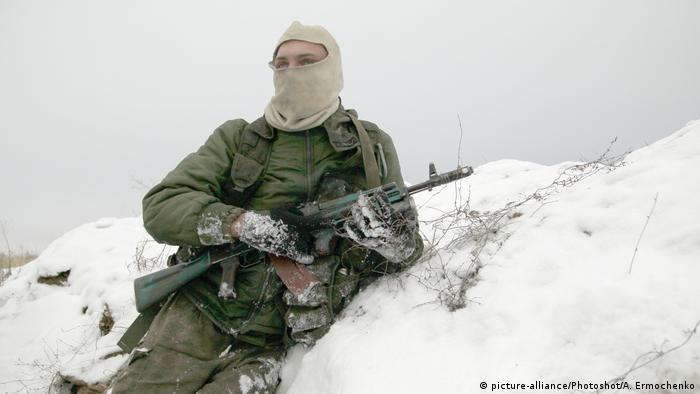 Following multiple attempts to end hostilities in the nearly 3-year-old conflict, eastern Ukraine this week witnessed a surge in violence between pro-Russia separatists and Ukrainian forces.

Observers witnessed a "sharp increase" in the number of ceasefire violations in eastern Ukraine since mid-December, Alexander Hug, deputy chief monitor of the Organization for Security and Cooperation in Europe's (OSCE) Special Monitoring Mission to Ukraine (SMM), told DW on Thursday.

"The SMM recorded 2,900 explosions between the evenings of the 18th and 19th of December. The majority of ceasefire violations were recorded in the areas around Svitlodarsk and Debaltseve," Hug said. "Other known hotspots along the contact line remained active."

He cited several reasons for the recent escalation in violence, including both parties of the conflict failing to withdraw weapons that are in violation of the ceasefire agreement commonly known as Minsk II.

"Last week, we recorded a 300 percent increase in use of weapons proscribed by the Minsk agreements. Many of these weapons should have been removed 15 kilometers (9.3 miles) and more from each side of the contact line," Hug told DW.

"Another reason is that positions of sides are too close to each other or that the sides move towards each other, which results in constant tensions. This often translates into violent flare-ups. The sides need to disengage," he added.

Nearly 10,000 people have been killed and 23,000 injured in eastern Ukraine since the conflict erupted in 2014 in the wake of former President Viktor Yanukovych's ouster, prompted by pro-Europe protests in the nation's capital.

Russia's illegal annexation of the Crimean Peninsula fueled the insurgency in eastern Ukraine, heightening tensions between pro-Russia separatists and government forces. More than 500,000 children have been affected by the conflict, according to the UN Children's Fund (UNICEF).

In a report published in November by the International Criminal Court (ICC), the Office of the Prosecutor said it would continue to gather evidence in relation to more than 800 crimes committed in eastern Ukraine.

The ICC prosecutor's office, charged with investigating and bringing international crimes to justice, including genocide, crimes against humanity, war crimes and crimes of aggression, said Kyiv accepted its jurisdiction in 2015 for crimes committed since February 2014, despite Ukraine not being a signatory to the Rome Statute.

Since the beginning of the conflict, Ukraine has accused Moscow of supporting the rebel movement, claiming that it has deployed servicemen and launched attacks in a bid to bolster the separatists in the eastern regions, including downing one of its aircraft.

However, the alleged Russian incursion had been largely overshadowed the following day by the downing of Malaysian Airlines flight MH17 over the conflict-affected region by a Russian-made BUK surface-to-air missile, leaving 298 people dead.

Digital forensics group Bellingcat on Wednesday published an investigative report showing that "artillery units of the Russian Armed Forces fired attacks on at least 149 separate occasions against Ukraine in the summer of 2014."

Bellingcat traced 408 artillery target sites inside Ukraine "within range of Russian artillery systems" with a trajectory crossing the Ukraine-Russia border, including 127 of them within three kilometers (1.8 miles) of Russia's border.

"In total, as evidenced by the number of impact craters, thousands of artillery projectiles were fired by the Russian military on targets inside Ukraine in the summer of 2014," the report said.

"Due to frequency, spatial distribution and scale of the artillery attacks considered in this report, it is impossible to consider these attacks as merely accidents or as the actions of rogue units. These attacks can only therefore be considered as acts of war by the Russian Federation against Ukraine," it added.

In 2015, Russian President, Vladimir Putin, dismissed claims of the country's involvement in the conflict, stating that its forces had not entered Ukraine.

"In regard to the question of whether or not our troops are in Ukraine, I'll say directly and definitely that there are no Russian troops in Ukraine," Putin said during an annual press conference in 2015.

However, Putin's claim has been undermined by several investigative reports, including the significant increase in medals awarded to Russian servicemen for "Distinction in Combat" at the beginning of 2015, before Moscow's entrance into the Syrian conflict.