Violence erupts in Saudi Arabia after verdict | Middle East | News and analysis of events in the Arab world | DW | 21.10.2014

The death sentence of a Shiite preacher has sparked renewed violence in Saudi Arabia. Whether Iran is behind the unrest, or whether it's a result of the marginalization of Saudi Shiites, remains unclear. Nearly a week after prominent Shiite cleric Sheik Nimr al-Nimr was sentenced to death for sedition and other charges, renewed violence between Sunni leaders and the Shiite minority is threatening to escalate in Saudi Arabia.

Following the sentence, unknown gunmen attacked a police patrol in the country's restive eastern provinces. According to authorities, the attack set an oil pipeline on fire. The conflict has even spread across the border into neighboring Iraq, where a Shiite militia called for attacks on Saudi facilities over the weekend. Authorities in Saudi Arabia would face "serious consequences" if they did not withdraw the death sentence, came the warning. Shiite Iran has also warned Saudi Arabia over the possible execution.

Two German diplomats have survived an attack in eastern Saudi Arabia, according to Saudi state news. The vehicle was reportedly burned in the assault, but both diplomats escaped "unharmed." (13.01.2014)

Saudi Arabia is Iran's greatest rival in the battle for regional hegemony. Their rivalry is being played out in Iraq, Lebanon, Bahrain and especially Syria - if Assad's regime falls, it could tip the balance of power. (27.05.2013)

In addition to the charges of sedition, Saudi authorities accused the cleric of organizing protests and of disobedience to the king. Human rights organization Amnesty International has sharply criticized last Wednesday's verdict.

"The death sentence against Sheikh Nimr Baqir al-Nimr is part of a campaign by the authorities in Saudi Arabia to crush all dissent, including those defending the rights of the kingdom's Shia Muslim community," said Said Boumedouha, Amnesty International's deputy director for the Middle East and North Africa.

Shiites make up about 10 to 15 percent of the population in Saudi Arabia. The royal family and the religious authorities in the country represent the ultra-conservative Wahhabi interpretation of Sunni Islam. In such an environment, Shiites are discriminated against in different ways, explained Elham Manea, an associate professor at the University of Zurich and expert on the Gulf region.

When the king appointed a Shia to the advisory council of the Consultative Assembly of Saudi Arabia, the Shura, there were massive protests from the Sunni majority. Manea explained that Shiites face limitations in a number of professions and in schools, where the curriculum places an emphasis on Wahhabi Islam.

"The curriculum is built in a way to express the hegemony of the Wahhabi interpretation of Islam, more or less to send the message [...] that they [the shiites] are following a deviant type of Islam and that their place is hell," Manea told DW.

Over the last three years, sectarian violence has occasionally erupted in oil-rich Eastern Province. In 2011, as the Arab Spring rocked large parts of the Arab world, protests were also held here. The authorities, however, were quick to suppress them. According to unofficial data, violent clashes in 2012 resulted in about two dozen dead, including four police officers.

Al-Nimr, who has denounced the anti-Shiite discrimination in his sermons, was arrested in July 2012 when he was shot by security forces in Eastern Province. Authorities claimed that he had been injured in an exchange of gunfire when he tried to escape and had rammed a police car. His relatives denied those claims. After his arrest, thousands of people took to the streets. 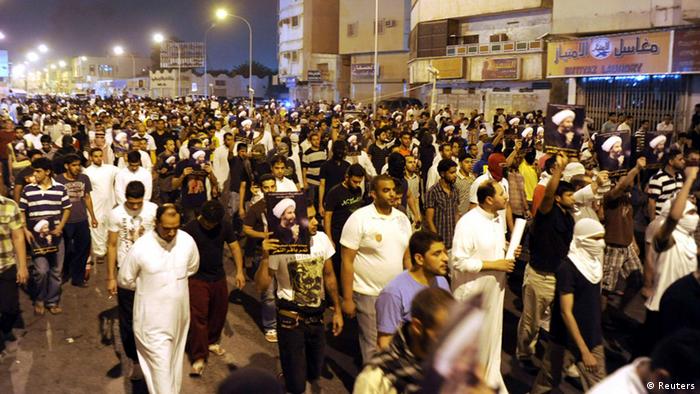 Riad Kahwaji, head of the Dubai-based Institute for Near East and Gulf Military Analysis, believes the source of unrest is not due to Saudi discrimination, but the intervention of Iran.

"These disturbances started happening more frequently after the Iranian Islamic Revolution," said Kahwaji. "This is one of the main reasons why relations have been strained between the Arab Gulf countries and Iran over the past few decades. Ever since the revolution, it has always been about claims of Iranian interference [and efforts] to agitate the Shiite communities in the Arab countries as a means to extend Iran's influence."

The extent of Iran's influence in Saudi Arabia is unclear. The Shiite opposition forces acting against the Saudi government remain divided. One group is pushing for reforms within the existing kingdom, while another is calling for separation of the Eastern Province. Members of this last group have been in touch with contacts in Iran, on the opposite side of the Persian Gulf. Al-Nimr had also threatened secession of the Shiite areas, should the Saudi government continue to refuse reforms that would benefit Shiites.

If the influential preacher is actually executed, Kahwaji said Shiite activists in the region would have a martyr and a reason to further escalate the violence. Manea agrees.

"If this execution takes place, I fear a further radicalization of the protests and the opposition within the eastern region."

COVID breaks out on Australian ship heading to Tonga