He may be just 17, but Vincent Keymer is already Germany's best chess player and finished second at the 2021 European Chess Championship. Bigger and better things promise to be in store for the young star in 2022. 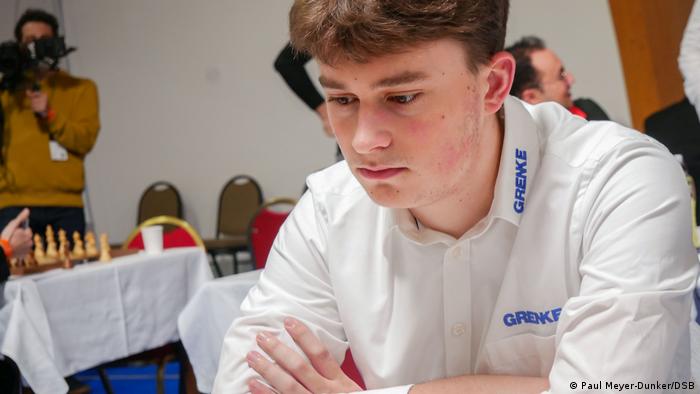 Vincent Keymer is looking forward to a better 2022

One year ago, Vincent Keymer was determined to concentrate on preparations for his high-school leaving examination. But that simply didn't happen.

"I've played a lot of tournaments since June. That's why I haven't been to school that often and have missed a lot," the 17-year-old told DW.

A few weeks ago, the teenager earned a place in the Grand Prix series of the World Chess Federation, a qualifying tournament for the next World Chess Championship, which is slated to start as soon as February. Fortunately, for him, he'll be done with his written exams by the end of January.

"I will prepare as well as I can for the tournaments despite school," he said.

Keymer is the first German in almost half a century who has a shot at winning a world championship one day, although this is unlikely to happen in 2022. He'll be up against 23 world-class players in the Grand Prix series, which is to be held in Berlin and Belgrade. Only two of them will qualify for the Candidates Tournament, which will determine the next challenger to serial world champion Magnus Carlsen.

Keymer is by far the youngest in the Grand Prix.

"I'm not at the top of the world yet," he said "After all, you have to know that only a few players ever even make it to a Candidate Tournament for the World Championship." 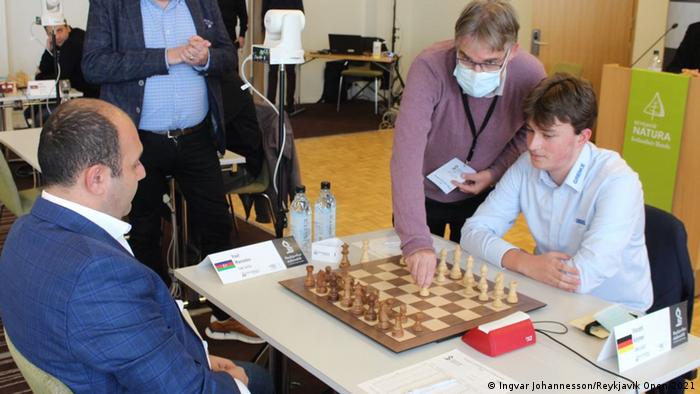 Keymer (playing at right) is usually the youngest in the room

Already, Keymer impresses with his well-balanced offensive chess even against some of the best players. And when things get tight towards the end, he tends to keep his cool. Things went particularly well for Keymer at the elite Grand Swiss tournament in Riga in November. So well, in fact, not only did he finish in a sensational fifth place and win a bonus of around $15,000 (€13,2900), but he was also able to continue in the World Championship qualification. Germany's best player is currently ranked 74th in the world rankings, not quite the very top level.

"Internationally there are a lot of strong players in this age group," said Germany-based Uzbek chess coach Rustam Kasimdzhanov. "It's not yet clear who will make it into the top 10."

Keymer is certainly among those who have a legitimate shot at making it to the very top. He defeated his first grandmaster at the age of 10. At 14, he earned that title himself — something no German before him had achieved at that age. And when he faced multiple world champion Magnus Carlsen for the first time in the spring of 2019, it took the world champion more than six hours to prevail.

But everything changed in March 2020, when chess, like much of the rest of the world, went into lockdown due to the outbreak of the COVID-19 pandemic. For Keymer, who hails from the small wine-growing town of Saulheim near the western German city of Mainz, fast online chess and a lot of training became the order of the day. He found it a less-than-satisfying replacement for the real thing.

"I think that the game with a long time to think is what chess is all about," he said. "So I was pleased when the live tournaments resumed."

It quickly became apparent in 2021 that he had made good use of his COVID-enforced break. By the time he finished second at the European Championship in Reykjavik, it had become clear to everybody in the chess world that Keymer's game had taken a major step forward. The player himself, though, can't quite put his finger on what triggered the sudden progress.

"It definitely did me good to play a lot of tournaments in a row," said Keymer, who is coached by Peter Leko, a former World Championship finalist from Hungary. "I got pretty deep into the material and was able to study it intensively." 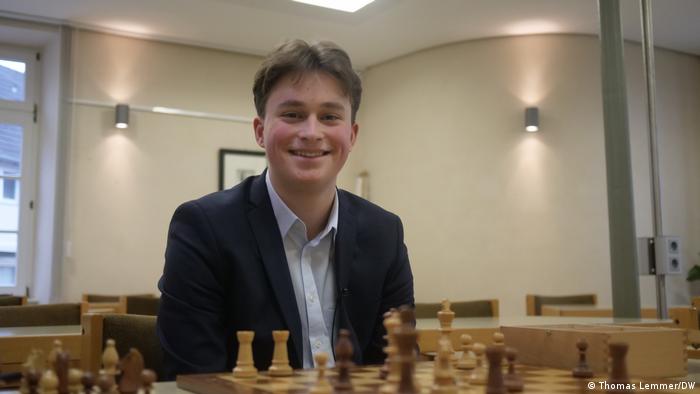 The COVID-19 pandemic has not slowed Keymer down

Once he gets his high-school leaving exams out of the way, the 17-year-old is planning to dedicate himself completely to chess.

"As long as you're going to school, you can't consider it a professional sport," he said. "This will change after high school."

Whether he can make it financially in the chess world remains to be seen. Only the very best players can live off the prize money they earn.

"We are still looking for another sponsor," said Keymer, who has so far been supported by a listed leasing company and the German Chess Federation. "It's important to earn money at some point, that's for sure, but right now my focus is still on improving at the chessboard."

Vincent Keymer finished ahead of more than 50 Grandmasters in the GRENKE Open chess tournament. The teen has earned a spot in next year's Classic, where he would face the world's best players.