Vigil on the beach a highlight of World Youth Day | World | Breaking news and perspectives from around the globe | DW | 28.07.2013

Vigil on the beach a highlight of World Youth Day

Pope Francis addressed over two million people gathered on famous Copacabana beach in Rio de Janeiro for World Youth Day. The Pope urged the young crowd to be the future ambassadors of the Catholic Church. 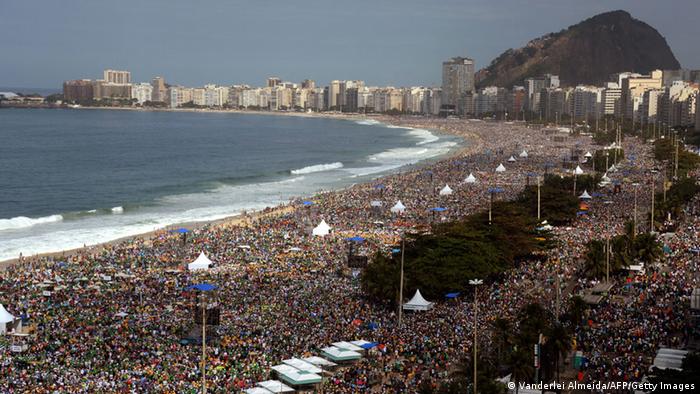 Copacabana beach looks like an old-fashioned battlefield, with flags fluttering in every direction. They are stuck into the sand, in between groups of young people equipped with plastic mats and sleeping bags. Not many tents are to be found, however, as the city authorities expressly prohibited these. Some of the campers have built small walls out of sand to create clear borderlines between their sleeping spots and those of others.

The mood is calm - one of joyful anticipation - and periodically meditative. The young people from all over the world gathered here for World Youth Day are planning to keep a vigil through the night. They want to say the night prayer together with Pope Francis before the event ends with a closing mass the following day. The crowd is estimated to number over two million people.

Originally, the night vigil and the final mass were going to take place at the Campus Fidei in Guaratiba, around 50 kilometers outside of Rio de Janeiro. But due to heavy rain in recent days, these activities got moved to Copacabana. Had this not been the case, the event could have ended in a muddy disaster and many participants may not have showed up at all. Traffic chaos would have exacerbated the situation even further, as the faithful had originally been warned that the bus ride would take up to 10 hours and the last 13 kilometers had to be covered on foot. 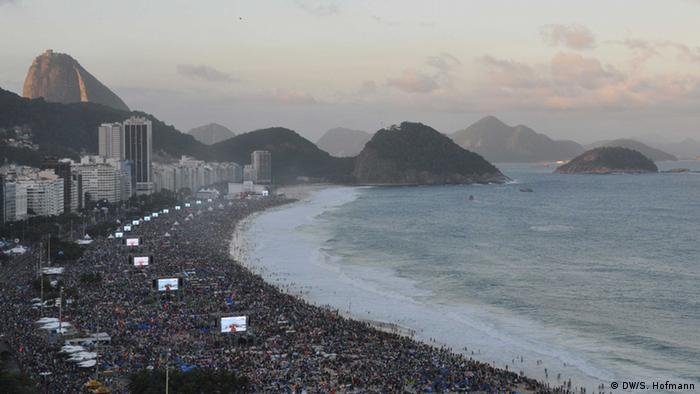 The pilgrims stayed up to hear their religious leader speak

Shannon from South Dakota in the United States, in fact, has managed to come here on foot. The walk from Rio's main train station to Copacabana took her six hours. Now her feet are sore and she wants to sit down, but there is no space. The beach is filled with people - some lying down, some sitting and some standing. "This is the largest crowd I have ever stood in," says Shannon, looking somewhat stunned. Meanwhile, the tide is coming in, and some sleeping bags are already soaked through.

"This was the greatest week of my life," says Sophia Ramura from Argentina. "Together with the Pope we want to prepare ourselves for the end tomorrow. It's so sad."

Just a few meters away, Sister Chrismarie from Venezuela is sitting on a plastic mat. Together with her fellow nuns and all the other young people she is looking forward to hearing the Pope speak.

In his address, Pope Francis chose the metaphor of the field: "Today I am sure that the seed is falling on good soil, that you want to be good soil, not part-time Christians, not 'starchy' and superficial, but real."

He also addressed the theme of this year's event: being a missionary. "Today, too, as always, the Lord needs you, young people, for his church. Today, too, he is calling each of you to follow him in his church and to be missionaries." 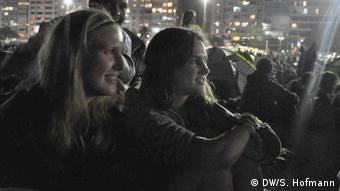 Two young German women present - Amelie Morweiser and Christine Verjans - did exactly that. They took part in the "missionary week" preceding World Youth Day. In groups they visited Rio de Janeiro's slums and knocked on doors - "just like Jehovah's Witnesses," beamed Amelie. But she stressed that their aim was not to convert anyone - they simply prayed together with the people.

Just like in his sermons in the preceding days, the Pope also included a political message in his talk tonight. He says he has been following world news and sees that many young people around the globe have taken to the streets "for a more just and fraternal society."

"They are young people who want to be protagonists for change," said Pope Francis. "I encourage them, in an orderly, peaceful and responsible way, motivated by the values of the Gospel, to continue overcoming apathy and offering a Christian response to the social and political concerns present in their countries."

While the pope is delivering his speech, several hundred demonstrators fill the beach promenade. They carry posters with slogans such as "Abortion is a basic right" and a few women have removed their T-shirts and are walking down the streets in their bras. One man has attached a helium balloon to his trousers - it is meant to symbolize a condom. They call out, "This is the Pope's dictatorship!" and soon after those gathered on the beach shout back, "This is the Pope's youth!" 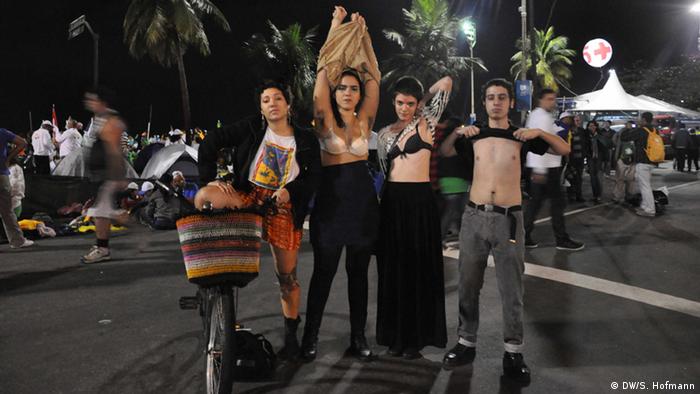 The opposition is not only concerned about questions pertaining to human sexuality. "They just want to party and see their Pope," says Tayana Nascimento. "Then, they go home and don't know anything about this place."

She accuses the World Youth Day participants of not caring about the problems that Brazil faces, "even though Brazil spends so much money on some things, while there's a lack of money elsewhere." However, the participants of the prayer vigil see things differently: They admire the pope because they believe he is doing something for the world's poor.

Two conflicting perspectives are colliding with each other, but then, something unexpected happens. After Tanaya and a young woman with a pope poster finish shouting at each other, Tanaya blows her opponent a kiss. The other woman does the same, and they both smile.

Many Catholics hope Pope Francis will strengthen laymen and women in church, who have been taking on responsibilities of priests in some rural areas. That might trigger a revolution, experts say. (24.07.2013)

Leonardo Boff: 'This pope will change the church'

Pope Francis will change the Catholic Church, says liberation theologian Leonardo Boff. DW spoke with him about mass demonstrations in Brazil and his expectations for the new pope. (23.07.2013)

Gloom hangs over pope visit in wake of protests