Gloom hangs over pope visit in wake of protests | World| Breaking news and perspectives from around the globe | DW | 21.07.2013

Gloom hangs over pope visit in wake of protests 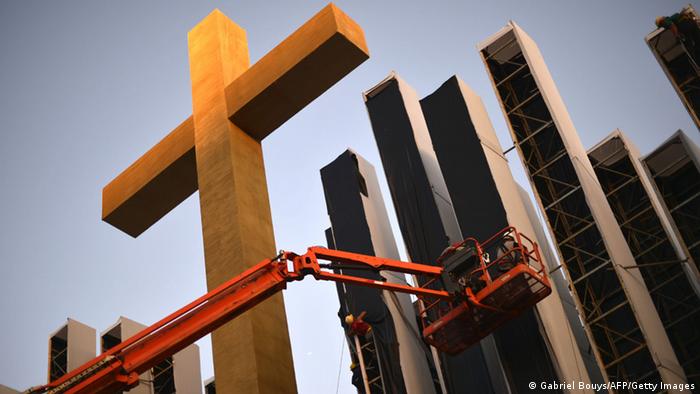 The residents of Rio are worried. The arrival of the pope could exacerbate an already tense situation in a country that has seen weeks of protests against government inaction to combat Brazil's many social ills.

"Everybody is nervous because Brazil has changed and nobody knows what direction the country is going," explained journalist and Vatican watcher Luiz Paulo Horta to DW. It is quite possible that protesters will highjack World Youth Day for political demonstrations, says Horta, who is also a member of Brazil's respected Academy of Literature and the Culture Commission of the Archdiocese of Rio de Janerio. 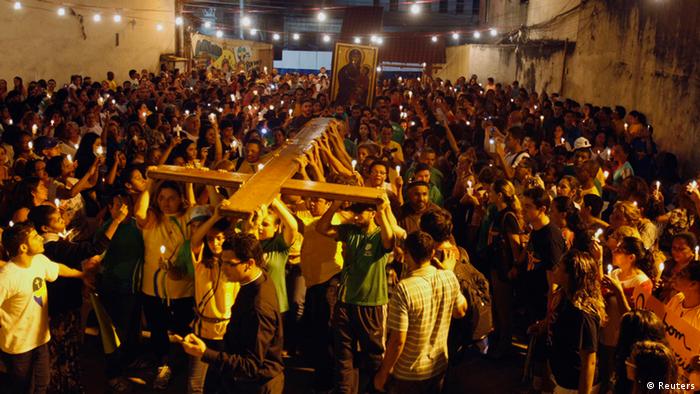 Not all Brazilians are protesting: Practicing Catholics are excited about the Pope's visit

The protests in Rio, in the meantime, have recently spread throughout the city, even reaching the affluent Rio neighborhoods of Ipanema and Leblon, although the number of protesters has dwindled significantly.

The reasons behind the demonstrations continue to vary widely. Some are angry protests against corruption and police violence, while others focus on the wealth and privileges of the political elite and business leaders.

Residents of the city's largest slum, Rochinha, recently blocked the entrance to a tunnel along a major thoroughfare because police mistakenly arrested a local resident, whom they believed was a drug dealer. Shops were plundered in Leblon and Ipanema and groups of protesters gathered outside the home of Rio's governor, Sergio Cabral.

Anger over cost of pope visit

A protest platform, calling itself "Anonymous Brazil," announced that when Pope Francis arrives on Monday there would be demonstrations "against public funding for World Youth Day, against Governor Sergio Cabral staying in office, against police violence and for the separation of church and state." The group went on to say that it "would not stop until the protests were so unbearable that FIFA is forced to find another venue for the World Cup." Brazil is hosting the 2014 soccer championships. 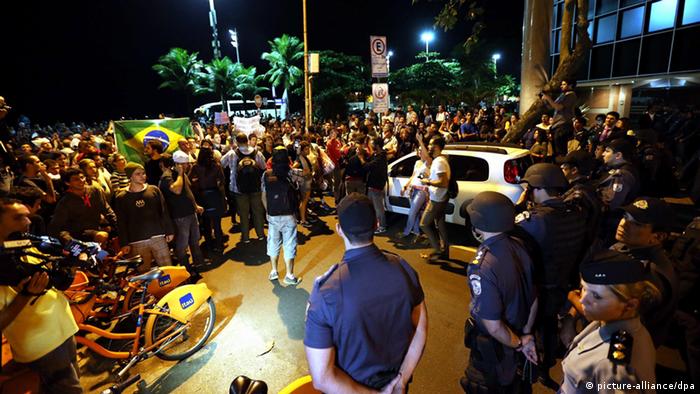 Protests in Rio have been ongoing for the last two months

Since protests began in June, police and the armed forces remained on high alert. In the last two months, the number of soldiers drawn from the Army, Navy and Air Force to provide security for World Youth Day has been increased from 8,500 to 14,300. In addition, thousands of paramilitary and regular police are on duty.

Plans call for some 20,000 security personnel, including firefighters, to be present at the pontiff's closing mass in Guaratiba, a Rio suburb, on July 28. There are strict orders from the Brazilian military that none of the expected one million participants are allowed to wear masks. All backpacks and handbags will be searched and all potentially dangerous objects will be confiscated, the military said.

Concerns for the Pope's safety 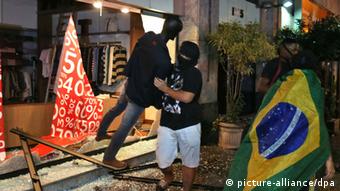 "We are a bit concerned about security," admits volunteer helper, Thalia Martins da Costa, who hails from the Brazilian state of Minas Gerais. However, the explosive mixture of protesters, pilgrims and prayer is part of the risk if you want to see the Pope, says the 22-year-old.

Only just a few days ago the Brazilian government was fully convinced that the protests would not be aimed at Francis, or have negative consequences for World Youth Day. The world's youth and the Brazilian people would make sure Francis is safe, said the head of the president's office, Gilberto Carvalho.

In the meantime, however, many residents of Rio are not so sure. "The minister should take the threats seriously, as well as the conflict of interest between the religious and non-religious," Rodolpho Heggendorn Donner wrote in a letter to the editor of the daily O Globo newspaper. In his view, it would be better if Francis didn't ride in his open Popemobile.

Spurred by police violence - and an acute awareness that he is among Brazil's privileged - lawyer Andre Barros has been working to free demonstrators arrested in the protests that have changed his country for good. (03.07.2013)

Brazil: On location for the protests

The mass protests in Brazil have given participants of the "Once Amigos" project an unexpected opportunity to rehearse reporting from the field ahead of next year's soccer World Cup in Brazil. (03.07.2013)