Vietnam was facing an acute famine some years ago. But within 25 years the Southeast Asian country managed to eradicate hunger and poverty - a UN Millennium Development Goal. It is no small achievement for the country. 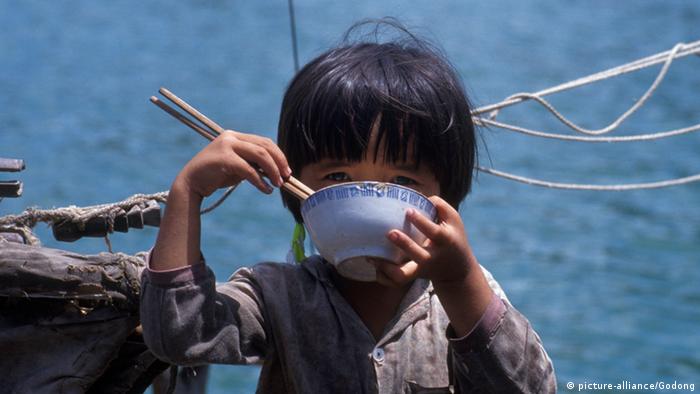 Southeast Asia has achieved more in the fight against hunger than any other region in the world. The fact is evident in a report published by the UN's Food and Agriculture Organization (FAO) on Wednesday, May 27. While thirty percent of the population in the region suffered from malnutrition in the 1990s, today this number has dropped to ten percent. A large part of the study discusses the Vietnamese success story that started just a generation ago.

"In the past, hunger was considered normal," Viet Thi Minh, who was born in 1958, told DW. She is one of those Vietnamese who experienced war and rationing of food. Between the 1960s and the early 1980s, most people - excluding farmers - received food from the government. For instance, the13 kilos of food items per month Viet received included rice, and dried tapioca made of cassava and maize, among other things - hardly sufficient to feed one person, especially when that person was involved in a physical job. 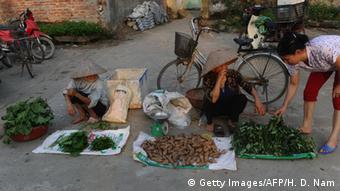 Farmers sell their produce in a market near Hanoi

The rationing lasted for years and continued even after the end of the war in 1975.

The Vietnamese government transformed its economic system from a wartime economy to one modeled after the Soviet planned economy. "But the collective approach simply did not work," Viet said, adding that no-one felt responsible for the drive. Ultimately, the country's productivity fell into a bottomless pit.

The outcome: "In the 1980s, the supply of food items was even worse than during war times," Gerhard Will, an expert at the German Institute for International and Security Affairs (SWP), told DW.

With the Vietnamese reunification and the rule of communists on both sides, the socialist economic model spread to the whole country, which "exported misery from north to the south," wrote Vietnam researcher, Heinz Schütte in a book.

However, the widespread poverty, malnutrition and hunger were not entirely a home-made phenomenon. The thirty-five years of war had badly damaged the country's infrastructure. In 1972, the US jets bombed the delta levees of the Red River. That almost destroyed Vietnam's rice production in the subsequent years.

Workers at a major Vietnamese footwear factory have ended on a week-long strike after the government announced changes to a social insurance law. DW examines the issue of retirement payouts in the Southeast Asian nation. (02.04.2015)

The matters aggravated after Vietnam's ties turned sour with the People's Republic of China due to the split of the communist bloc into Soviet and Chinese camps. This ended the food supplies from Beijing. The Soviet bloc, which Vietnam allied itself with, "was unable to fill the food gap," said Will.

The precarious supply situation lasted until the beginning of the 1990s. Almost two-thirds of all Vietnamese had to make ends meet with less than $100 per year. According to the United Nations, one Vietnamese in three regularly suffered from malnutrition; and one in four faced starvation.

These conditions led to the creation of a growing number of commercial initiatives, which were tolerate despite being illegal. Will explains that the party recognized that this led commercial production which worked very well. In 1986, the National Congress of the Communist Party launched the so-called Doi Moi (English: renovation) policy, which replaced the planned economy with a socialist-oriented market economy.

"The party simply sanctioned what had already taken place," said Will. Ms Viet, however, had to wait much longer for things to improve. As a result of Doi Moi, her family obtained land that she could farm on her own terms, thus ending decades of malnutrition.

Whoever travels to Vietnam will observe that children who were born in the cities or along the coastline in the mid-1990's literally stand head and shoulders above their parents and grandparents. This is arguably the most visible result of the improved diet. "Vietnam has made much progress," said Will, adding, however, that there are also areas and ethnic groups which have witnessed no such progress." This is true especially in areas settled by ethnic minorities and in the central highlands. 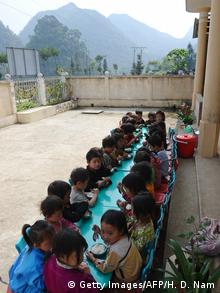 Analyst Will explains that a fundamental problem is that the fight against poverty is often reduced to a welfare policy. A more effective approach would be to offer economic opportunities to the poor and thus enable them to provide for themselves, he added. Such chances, however, are being taken from them, so the state grants them compensatory payments, at best.

A key issue in this context is the fact that minority groups are being pushed into less fertile areas by the fast-growing majority of the population.

However, Will is convinced that a long-term fight against hunger will only succeed if Vietnam's yearly GDP growth rate increases from currently 5.8 percent to 7 percent. So far, Vietnam has focused on making labor-intensive products with minor added value, thus allowing only modest economic expansion.

To enhance this, the country needs improved infrastructure and a better education system. "Vietman must make a leap in terms of quality, but it seems the leadership is still unaware of this," said Will. To achieve this, reforms such as those from 1986 would be required.