The free trade agreement with Vietnam is the EU's most ambitious trade deal with a developing country. The deal is set to give the Southeast Asian country a much-needed economic boost amid the coronavirus pandemic. 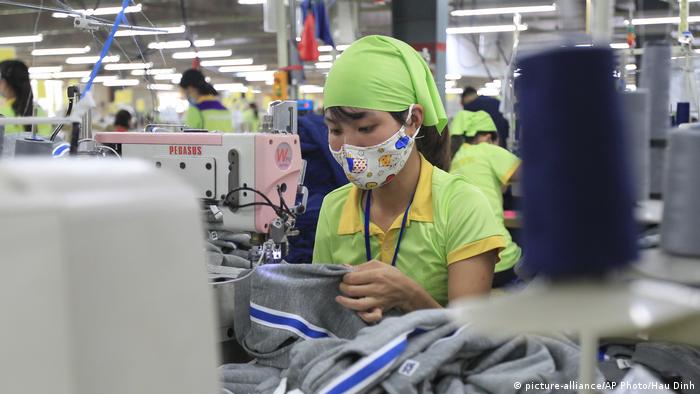 Vietnam ratified a landmark free trade agreement with the European Union on Monday, in a move that is set to boost the country's economy as it looks to maneuver through the coronavirus crisis.

Lawmakers in Vietnam's National Assembly overwhelmingly voted to pass the deal. In a rare move and display of transparency, the vote was broadcast live on Vietnamese television.

The implementation of the deal "can't come at a better time for Vietnam when it's on the path of economic recovery after several months of closure due to COVID-19,'' economist Pham Chi Lan, a former adviser to several of Vietnam's prime ministers, told the Associated Press.

The deal, known as the EU-Vietnam Free Trade Agreement (EVFTA), has been in the works since 2012 but was held up for several years due to a series of legal hurdles. Officials signed off on the deal in Hanoi last June and it was ratified by the European Parliament in February this year.

The deal, described by Brussels as its most ambitious deal with a developing country, is expected to take effect in July or August this year.

Vietnam will lift 49% of its import duties on EU exports, phasing out the rest over the next 10 years.

In ratifying the deal, Vietnam committed to implementing sustainable development standards, protecting labor rights and to uphold its pledges to tackle climate change under the Paris Accord.

Hanoi also agreed to eliminate all forms of forced labor, to abolish child labor, and to allow workers the right to collective bargaining.

Analysts say the deal is coming at the right time after the coronavirus pandemic revealed shortcomings in Vietnam's manufacturing sector — and particularly highlighted issues with its dependence on China in its supply chain.

The country managed to contain the coronavirus early on with strict border closures and social distancing measures, but Vietnam still faces severe economic impacts from lockdowns at home and abroad.

In May, the World Bank said that the trade agreement could help lift hundreds of thousands of people out of poverty in Vietnam and boost the country's GDP by 2.4% by 2030.

Vietnam is one of the world's fastest-growing economies and the EU's second-largest trading partner in Southeast Asia. Two-way trade between Hanoi and the bloc amounted to $56 billion (€49.5 billion) last year, according to Vietnam's national general statistics office.

Singapore is the only other Southeast Asian country to sign a free trade agreement with the EU.

Despite the troubled global economic environment amid the COVID-19 pandemic, the Vietnamese government remains sanguine about the nation's economic prospects and sets an ambitious growth rate target for this year. (22.05.2020)

The EU has said the trade agreement would be the most ambitious the bloc has ever negotiated with a developing country. However, authoritarian Vietnam will still have to improve its labor and social standards. (17.01.2020)