Austrian leaders have taken part in a memorial service to remember the people killed during a shooting spree in central Vienna in 2020. Criticism remains over the government's actions in the run-up to the violence. Vienna marked one year on Tuesday since a deadly terror attack that left four people dead.

On November 2, 2020, a sympathizer of the so-called Islamic State (IS) group shot and killed four people in the Austrian capital before he himself was shot dead by police.

"This city is strong," Mayor Michael Ludwig said, speaking at the city's historic central Desider-Friedmann-Platz, where some of the shootings took place.

He went on to say that Vienna would "not be brought to its knees — not from cowardly terrorism, not from people who think that they can endanger our democratic values." 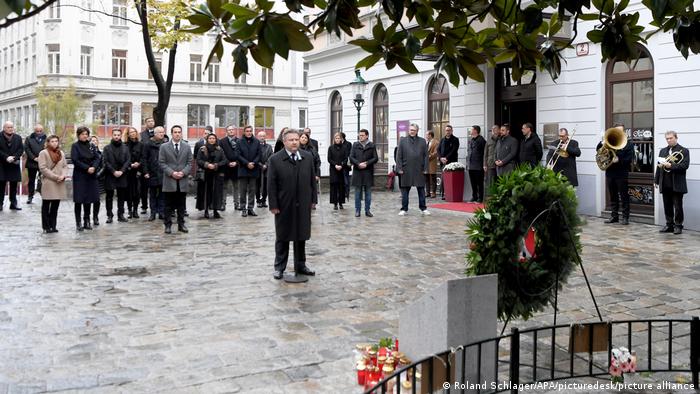 The government has set up a compensation fund of €2.2 million for the victims of terrorism

An attack on the 'heart of society'

The Social Democrat mayor met with more than 20 relatives of the victims before his speech.

A memorial event was set to take place in St Rupert's Church later in the day. President Alexander Van der Bellen and Chancellor Alexander Schallenberg both planned to attend the service.

The president shared a message on Twitter on Tuesday morning, saying: "A year ago a cowardly terrorist attack was carried out on the heart of our society. Right in the center of Vienna. In the middle of the Republic. Four people lost their lives. Many were injured. Many put their life and health on the line to protect others."

"Hate can never be as strong as our community in freedom, democracy, tolerance and love," he added.

Criticism of the government

The entire incident lasted just nine minutes, but its consequences are still being felt.

The government has come under fire for not having done enough to prevent the attack. The 20-year-old perpetrator was a former convict, and investigators had known about him meeting with other Islamists and trying to buy ammunition in the run-up to the attack, an investigation commission found.

The center-left Social Democratic party used the one-year anniversary to call for the resignation of Interior Minister Karl Nehammer, condemning his treatment of the victims, local newspaper Der Standard reported.

The opposition party claimed that the ruling conservatives had tried to escape responsibility and had yet to offer an apology for mistakes made before the attack.