Victory for Christian Democrats in Schleswig-Holstein | Germany | News and in-depth reporting from Berlin and beyond | DW | 07.05.2017

Victory for Christian Democrats in Schleswig-Holstein

Chancellor Merkel's CDU party has recorded a resounding election win in the state of Schleswig-Holstein. The Social Democrat SPD, which has led the coalition state government since 2012, saw a drop in support. 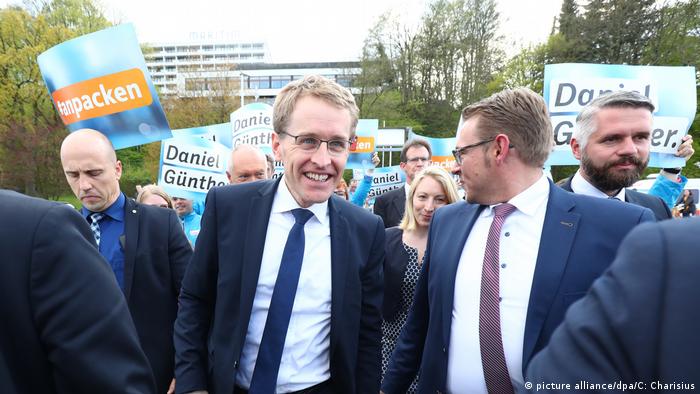 Chancellor Angela Merkel's conservative Christian Democrats (CDU) easily defeated the ruling Social Democrats (SPD) in state elections in Schleswig-Holstein on Sunday, exit polls and early returns broadcast by public service TV stations show. Provisional results show the CDU received some 33 percent as compared with around 26 percent for the SPD.  The SPD has been governing in coalition with the Green party and the regionalist SSW in the northern state for the past five years.

The anti-immigrant Alternative for Germany (AfD) will enter the state parliament for the first time. The populist party garnered 5.5 percent of the vote, clearing the 5 percent hurdle needed to enter a German legislature. Although receiving just  3.5 percent of the vote, former junior coalition partners the SSW - a party representing the interests of Danish and Frisian minorities in the state - will keep some seats, as it is not subject to the same hurdle as other parties. 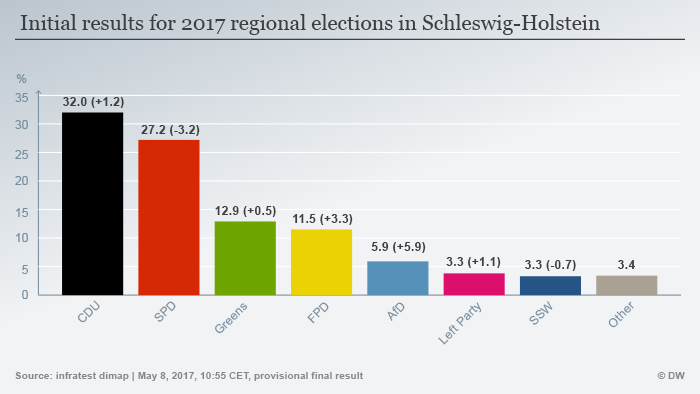 The Green party made slight gains on its 2012 results, receiving about 13.5 percent of the vote, and the free market libertarian FDP jumped 3.3 percent in the polls to reach 11.5 percent, leaving options open for a coalition.

"This is a clear victory for Mr. Günther," reported the ARD, referring to the CDU's top candidate Daniel Günther (pictured above), a political scientist and businessman who has represented the CDU in the state since 2014.

Günther claimed victory on Sunday in an interview with ARD. "The SPD has been voted out of power and it is up to the CDU to form a coalition," he said, adding that he would hold coalition talks with the FDP and Green party. Preliminary figures show that such a coalition would form a 42-seat majority in the region's 69-seat parliament.

SPD Secretary-General Katarina Barley admitted defeat from the capital, Kiel, shortly after the results were announced.

"This a bitter result for us," Barley said, but downplayed the idea that this could hurt the momentum of the party ahead of another round of regional elections next week - in Germany's most populous state, North Rhine-Westphalia, an SPD stronghold. "That is a whole other ballgame," she said.

The vote was seen as an important litmus test for Germany's federal elections in September, with Chancellor Merkel seeking a fourth term in office. In response to the results, the CDU's  Secretary-General Peter Tauber congratulated his colleagues in Schleswig-Holstein, saying that "the voters have given Daniel Günther and the CDU a clear mandate to govern ... what no one thought was possible just a few weeks ago has become reality."

The Social Democrats have not held the chancellorship since 2005. They experienced a bump in the polls early in 2017 when they named former President of the European Parliament Martin Schulz to be their top candidate, but those numbers have since slumped. Merkel's CDU, by contrast, has gained ground after losing a string of state elections over the past two years. Voters had punished the chancellor for her open door refugee policy that saw over one million asylum seekers arrive in Germany since 2015. However, with the rate of new arrivals slowing, the CDU is expected to perform strongly in September's federal elections.

Schulz expressed his disappointed in the early returns in Schleswig-Holstein, saying" "This is an event that upsets us deeply. We all expected a better result."

Voters in Germany's northernmost state, Schleswig-Holstein, are casting their ballots in a closely watched regional election. The poll is being seen as a test of Merkel's popularity ahead September's federal election. (07.05.2017)