In the early hours of May 29, 1993, four young men set the house of the Turkish Genc family on fire in Solingen. Five girls and women died. The family stayed in Solingen - despite their suffering. 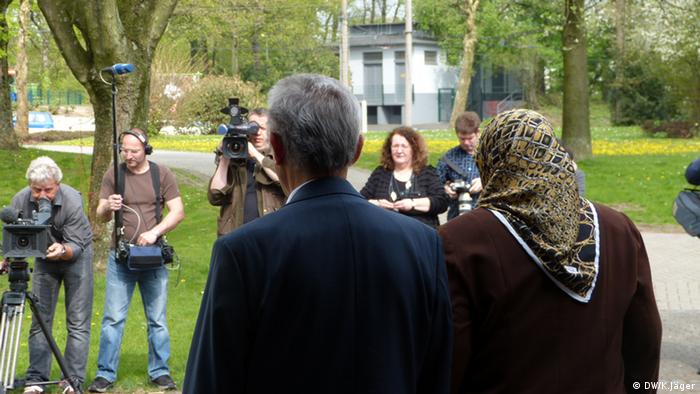 A crowd of journalists is waiting outside the house, equipped with cameras and microphones. Then, Durmus Genc, his wife Mevlüde and their son Kamil step out of the building.

They keep their distance from the reporters - and just stand there, husband and wife close together, their son next to his parents. 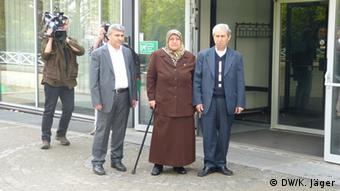 For minutes they just stand there in silence, their faces still marked with pain. They stand there, proud and upright, the men both wearing suits and Mevlüde Genc clad in a brown outfit with an elegant golden brooch and a matching headscarf of the same color, holding on to a walking stick.

They patiently wait until all pictures have been taken. Mevlüde Genc doesn't seem to have aged. She doesn't look like a 70-year-old who has lost five loved ones in a fire. The cane is the only reminder that she needs support. When she turns around, she suddenly pauses for a brief moment and touches her aching back. But her face doesn't reveal she's in pain. She just keeps walking, back into the bulding. Mevlüde Genc has learned to live with pain.

It has been 20 years since the arson attack which killed five of her relatives: her granddaughters Hülya and Saime Genc, four and nine years old; 12-year-old niece Gülüstan Öztürk; and her two daughters, Hatice (18) and Gürsün Genc (27), who died in the flames.

The son of Mevlüde and Durmus Genc, 15-year-old Bekir, was severely wounded after jumping out of a window. Bekir spent 22 days in a coma and had to undergo surgery several times. He will have to live with the scars and the burns for the rest of his life.

Three days before the attack, on May 26, 1993, Germany's parliament had decided to change its basic law in order to massively reduce the number of asylum seekers in Germany. 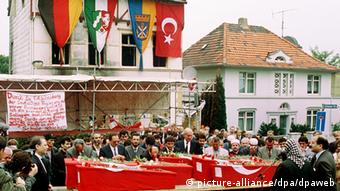 At that time, Mevlüde had already spent almost 20 years in Germany. She had followed her husband, who had found work in Solingen. When they found their house on Untere Wernerstrasse 81, they brought their children to Germany as well; the children had initially stayed with Mevlüde's parents-in-law in Turkey. Mevlüde took cleaning jobs in Germany, contributing to the family's livelihood. She says she never experienced anything bad - until the day of the arson attack.

Before the attack on the Gencs' house, Germany had seen other racially motivated attacks: in September 1991 in Hoyerswerda, in August 1992 in Rostock-Lichtenhagen and in November of that same year, when two women and one girl of Turkish origin burned to death in Mölln.

After the house burned, four suspects were arrested. They were between 16 and 23 years of age and from the neighborhood. Their motive was xenophobia. They were given prison sentences of between 10 and 15 years. Two culprits were released early for good behavior.

A life in mourning

The reporters in Solingen want to know what Mevlüde thinks about the National Socialist Underground, the German terror cell that went on a racially-motivated murder spree across Germany for almost a decade - and how she feels about their trial. They also ask how her son is and how she can endure so much pain.

But she refuses to answer each and every question related to these topics. It takes a while for the interpreter to translate the questions into Turkish and the answers into German. She is fine, she claims. She thanks all the media representatives for coming and she expresses her gratitude to everybody who has helped her over the past 20 years. 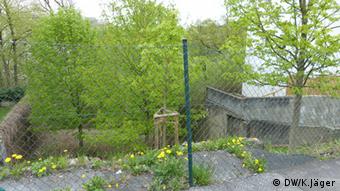 Once a month she visits the place where her children, her grandchildren and her niece burned to death. It's like going to the cemetery for her, because the graves of her loved ones are far away in Turkey. Five chestnut trees - one for each family member - and one memorial plaque keep the memory alive. She told her nine grandchildren that their relatives died from smoke poisoning because she feared the real story would have traumatized the little ones.

Mr. and Mrs. Genc today live on a lively street in Solingen, in a house surrounded by a metal fence. Surveillance cameras record every movement outside, and the windows open automatically in case of fire. They built the house with the money they got from the insurance and donations. The family still hasn't received any compensation payments from the culprits.

There have been incidents where people accused Gencs of living in a palace with a swimming pool. "Nothing but rumors," Mevlüde insists, saying she doesn't need luxury. She finds mutual respect more important. She says she finds strength in her religion and adds that living together peacefully is the highest achievement people could possibly have.

Mevlüde draws these lessons from her regular visits to the mosque, lessons that have also taught her that all people are equal, regardless of their origin or religion. In Germany, she insists, rules and laws are applied. She places large faith in the rule of law, she says. According to her, the culprits have served the sentence they deserved. The rest, she says, is up to God to decide.

She isn't following the trial against the suspected culprits of the National Socialist Underground. That would only leave her stirred up, she says. Her husband, Dumus, and her son sit quietly while she speaks. 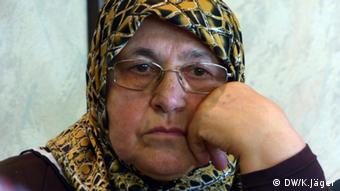 She appeals to her neighbors to uphold good relationships, because that's what defines daily life.

But Mevlüde still refuses to speak German. She came to Germany at a time when learning German wasn't considered important. The German authorities assumed the guest workers would sooner or later return to their home countries. And even her son, Kamil, has difficulties with the language as he describes how he and his children translate for his mother.

The 70-year-old uses gestures to communicate and believes in the skills of the third generation of immigrants. Lutz Peters, the press spokesman for the city of Solingen who organized the meeting with media representatives, seems to agree.

"We printed T-shirts for the 20th anniversary of the arson attack. They read: 'Laßt uns Freunde sein' - 'Let's be friends'," he says. "When Mrs. Genc's granddaughter saw the T-shirts she said: ‘But 'Laßt' is not spelled with an 'ß', it's spelled with 'ss'."

And that is indeed the correct spelling.

Five members of one family died when right-wing youths set fire to a house in Solingen in 1993. Despite efforts to deal with prejudice, people from immigrant families there still feel under pressure two decades later. (28.05.2013)

Twenty years after the arson attack in Solingen, right-wing extremism is a bigger threat than ever, says DW's Baha Güngör. (28.05.2013)

Solingen - 20 years after the fire attack