Protesters clashed with police in Bahrain hours before a Formula One race began in the Gulf nation. The violence overshadowed the event, which world champion Sebastian Vettel won in his first victory of the season. 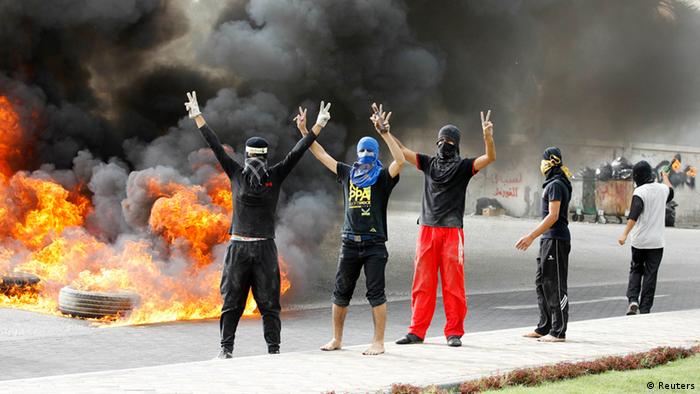 Two-time world champion Sebastian Vettel won the Bahrain Grand Prix on Sunday in his first victory of the season, as fresh violence between anti-government protesters and police marred the event's image.

Vettel gained an early lead and finished nearly flawlessly ahead of Kimi Raikkonen, 2007 champion, and his fellow Lotus team driver Romain Grosjean. The win puts Vettel at the top of the drivers' standings with 53 points.

The race itself went by without incident despite renewed clashes between protesters and police that erupted just hours before. 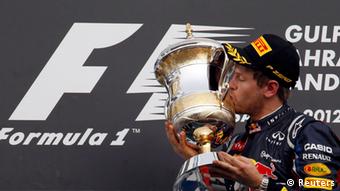 The fresh violence came after a protester was found dead in the Shiite village of Shakhura on Saturday, where the opposition al-Wefaq movement said security forces brutally attacked demonstrators on Friday night.

The Interior Ministry said the death of 36-year-old Salah Abbas Habib was being investigated as a murder.

Demonstrators have also called for the release of prominent Shiite activist Abdulhadi al-Khawaja, who has been on hunger strike since early February after being jailed for helping an uprising last year.

The interior ministry said on Sunday, however, that Khawaja was in "good health" and would meet Denmark's ambassador that same day. Khawaja is a citizen of both Bahrain and Denmark.

The ruling family crushed Arab Spring demonstrations last year, with 14 men being imprisoned as ringleaders. The government says it has since enacted reforms in the country.

The protesters have denounced the Grand Prix on Sunday as a spectacle designed as a smokescreen to hide the true situation in the island kingdom. Some banners carried during a march of 7,000 people on Saturday showed Formula One drivers as riot police beating up protesters.

Bahrain's government is thought to have spent $40 million (30.3 million euros) to host the event, which has drawn more than 100,000 visitors.

With the F1 circus underway in Bahrain, business and tourists are pouring back into the tiny Gulf Kingdom. But the gleaming cars and cheering race crowds are in stark contrast to what’s going on behind the scenes. (22.04.2012)

While motor sports journalists have been invited to cover the race, some reporters who usually write on Middle East politics have been denied visas.

On Sunday night, Channel 4 News correspondent Jonathan Miller and his team were arrested while reporting from Bahrain. "We were caught filming a planned demonstration in one of the Shia villages" Miller explained by telephone to his London office. The team's driver was arrested and assaulted in front of the team before being separated from them.

"I'm in the back of a police vehicle in Bahrain, completely surrounded by riot police, and I'm being taken to a police station in Bahrain City," he said. "Right now we're concerned for our driver...things are rather worse for Bahrainis in police custody."

A Channel 4 News spokeperson said: "We can confirm that our foreign affairs correspondent Jonathan Miller and his team have been arrested whilst reporting for the program from a village in Bahrain. Our primary concern is for the safety of the team, and we are working with the appropriate authorities to secure a swift release. We are also working hard to establish the whereabouts of the driver they were with as we believe he has been separated from the group."

Last year, the race was canceled amid security concerns over anti-government demonstrations.

Competitors taking part in the race have been largely shielded from events in the rest of the country.

Vettel, who started at pole position, said shortly after his arrival on Thursday that he thought much of what was being reported was hype.

He said he looked forward to getting in the car and dealing with the "stuff that really matters - tire temperatures, cars."

On Saturday, Jean Todt, the president of the International Automobile Federation that governs Formula One, said he was sorry "about what had been reported," but added that he was not sure that "all that has been reported corresponds to the reality of what is happening in this country."