Max Verstappen won in Canada for the first time on Sunday from pole position to extend his lead in the Formula One championship. Lewis Hamilton got his second podium in a difficult season. 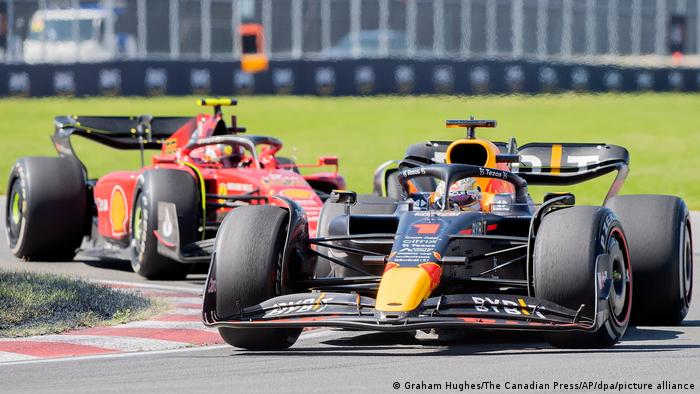 Red Bull's Max Verstappen celebrated his 150th Formula One race on Sunday with a 26th career victory and a first in the Canadian Grand Prix that extended his world championship lead.

The 24-year-old Dutchman held off a late challenge from Ferrari's Carlos Sainz after a safety car phase en route to his sixth season win – by just 0.9 seconds – as sunny skies returned to Montreal after a wet qualifying Saturday.

"I was pushing flat out, I wasn't leaving any inch to the walls under braking," said Sainz. "I tried everything to pass Max but the positive thing is we were quicker, we were faster in the race. We were very close to winning today so I'll take the positives."

Hamilton back on the podium

Seven-time champion Hamilton finally was back on the podium in third for Mercedes, with the team's campaign still dogged by a bouncing car.

"It's quite overwhelming to get this third place," said the Briton. "It's been such a

battle this year with the car, but we continue to stay vigilant, stay focused," he said.

"They're a little bit too fast for us at the moment but we're getting closer, so we have to keep pushing!"

Title holder Verstappen now tops the standings 46 points ahead of team-mate Sergio Perez who had to retire early with what appeared to be a gearbox problem.

Mick Schumacher also had to retire his Haas at the same spot as Perez, further postponing his quest for his first F1 points despite a career-best sixth in qualifying.

Early season leader Charles Leclerc of Ferrari is third in the standings after rallying to fifth from 19th on the grid over a penalty in connection with using too many new power unit components.