Venezuelan President Nicolas Maduro has pardoned more than 100 political opponents ahead of December's parliamentary election. Dissidents will boycott the vote so as not to give the ruling party the sheen of legitimacy. 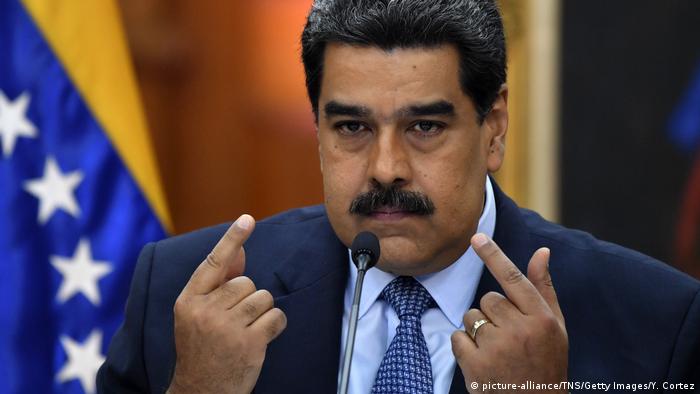 In an effort to promote "national reconciliation" and increase voter participation, Venezuela's government has pardoned more than 100 opposition politicians — including 20 National Assembly deputies who had been accused of plotting against President Nicolas Maduro — ahead of December's legislative elections. Fearing that the Socialist Party could rig the results and use the vote to give the government the sheen of legitimacy, 27 opposition groups have agreed to boycott the polls.

"If these elections take place, then President Nicolas Maduro will get the majority he wants in the National Assembly," Sabine Kurtenbach, from the German Institute for Global and Area Studies in Hamburg, told DW.  "He has changed the rules to favor candidates and parties that are loyal to his regime," she said. "They are more likely to get seats. The opposition, which wants a change of government, doesn't have a chance of winning."

In 2018, a large part of the opposition boycotted the presidential election that gave Maduro a second term. Five million Venezuelans left the country as a result of the economic and political fallout. In January 2019, the newly appointed president of the National Assembly, Juan Guaido, proclaimed himself Venezuela's interim president until a free election could be held. Though he had not been elected to the post, his claim was recognized by the governments of about 60 countries, including those of the United States and most EU members; however, Venezuela's army continued to back Maduro — and Guaido's political influence has since dwindled.

"The opposition is not successful, because it faces a regime that is prepared to do anything to stay in power," said Detlef Nolte, a political scientist at the University of Hamburg. "Even if the regime is working with undemocratic methods, the opposition should not resort to these — however frustrated it might be."

The mass pardon is an attempt to further divide the opposition and coax at least some politicians into taking part in the December elections. If voter turnout ends up being unusually high, Maduro's tactic could pay off. Guaido knows this and has said that the move was a "means of pressure" to "legitimize a farce." He tweeted that it was a "trap" that he would not fall into.

Maduro's strategy could be successful. If his party were to win the elections, he would have the legitimation that Venezuela needs to come out of international isolation — and access to loans to help pull the country out of its deep economic rut.

"Apart from wanting to get rid of Maduro, the Venezuelan opposition does not have a common plan for a post-Maduro future," Kurtenbach said. She added that dissident factions were not even capable of agreeing on a plan to remove the president from office: "Some are cooperating, others want to stick to democratic methods, but others, such as the prominent opposition figure Maria Corina Machado, do not exclude the use of violence."

Affectionately referred to by supporters as MCM, Machado has criticized Guaido for missing opportunities to oust Maduro and has argued that the National Assembly should act to legitimize foreign intervention. "Machado is currently doing Nicolas Maduro a big favor by speaking of the necessity of military intervention," Kurtenbach said. "It gives him the perfect excuse and reason to claim that the real threat to the country is from abroad, or from an opposition that is being manipulated from abroad."

That would be an empty threat, Nolte said. "It makes no sense to talk of military intervention, because no country is willing to make good on this," he said, adding that the regime would not fall as long as the army continues to back Maduro.

For now, the German observers said, it appears that unity and perseverance will be key. "As long as the opposition is unable to overcome its divisions," Kurtenbach said, "it is the best guarantee that Nicolas Maduro's regime will remain in power."

Translated from German by ACT