US offers $5-million reward for arrest of Venezuela chief justice

The US has imposed new sanctions on Venezuelan Chief Justice Maikel Moreno and offered a bounty of $5 million for his arrest. Washington accuses the judge of taking bribes — charges Moreno says are based on lies. 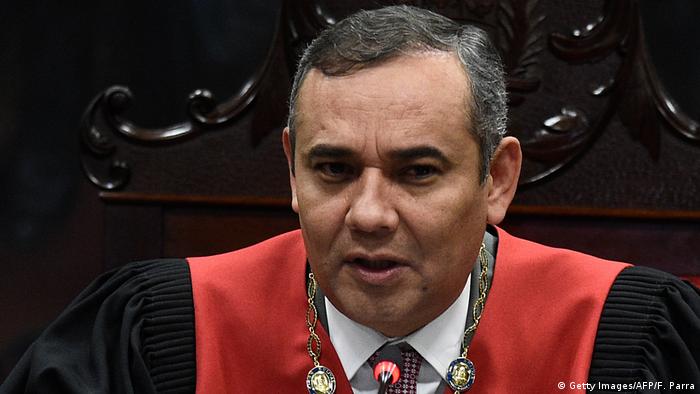 The United States on Tuesday announced a $5-million (€4.33-million) reward for information leading to the arrest of Venezuelan Chief Justice Maikel Moreno, accusing him of taking bribes and participating in transnational organized crime.

US Secretary of State Mike Pompeo said the judge, an ally of Venezuelan President Nicolas Maduro, had "personally received money or property bribes to influence the outcome of civil and criminal cases in Venezuela," in recent years.

"Moreno Perez received the bribes in exchange for judicial actions" in more than 20 cases and ordered lower court judges to release the accused or dismiss cases, Pompeo said.

Washington also imposed sanctions on Moreno which bar him and his wife from traveling to the US over accusations of his "involvement in significant corruption." He had been on the US Treasury's sanction blacklist since May 2017, but was added to a separate list on Tuesday.

In response, Moreno said Venezuela's judiciary would not accept "tutelage" from a foreign government. "This is not the first time that the mouthpieces of the North American empire seek to attack me with their clumsy attacks, full of manipulation and lies," he said.

"They will never succeed because the independence and sovereignty of our homeland is not up for discussion," he said.

Moreno was charged with money laundering in March under a round of indictments against Maduro and more than a dozen other Venezuelan officials.

Earlier this year, the Trump administration launched a "maximum pressure" campaign to oust Maduro, charging him as a "narcoterrorist" and offering $15 million for his arrest.

The US, along with dozens of other countries, recognizes opposition leader Juan Guaido as Venezuela's legitimate president.

Venezuelan President Nicolas Maduro has ordered the head of the EU mission in Caracas, Isabel Brilhante Pedrosa, to leave the country after the bloc announced sanctions against several Venezuelan officials. (30.06.2020)

The Venezuelan regime has unsuccessfully sought to retrieve its gold reserves from the Bank of England since 2018. The ruling is a blow to Nicolas Maduro, who has been crippled by an economic crisis and US sanctions. (03.07.2020)