Venezuelan opposition lawmakers have called for the removal of the Supreme Court judges who issued a ruling nullifying the country's congress. The ruling threw Venezuela into a week of political crisis and protest. 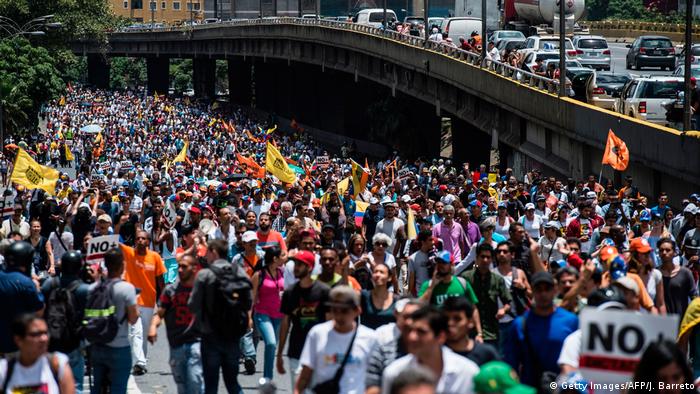 Opposition leaders said the judges had to be removed to restore constitutional order in the economically embattled country. Congress doesn't, however, have the power to recall judges by itself.

The decision, which sparked huge protests, was reversed on Saturday after coming under heavy international criticism. Guevara slammed the Supreme Court's reversal, too, accusing the government of creating a purely cosmetic correction to cover up what he called a creeping coup d'etat.

The goal of the court's decision to reverse the ruling was to pacify the public, Guevara said, adding that the government wanted to "deceive."

Guevara also announced a plans for a demonstration on Tuesday in the Venezuelan capital.

In a speech earlier on Sunday, President Nicholas Maduro accused his opponents of seeking to generate violence and destabilization through street protests.

Venezuela's top court passed the controversial ruling last Wednesday after the National Assembly initially refused to comply with a court order barring three deputies whose elections were disputed by the government.

The country's opposition lawmakers have been calling for a referendum removing Maduro from office for months. Their attempts have so far been blocked, however, by the loyalist courts and electoral commission.

For more than a year, Maduro has been ruling largely by emergency decree in response to an economic crisis that has raised concerns that the country could implode, creating a larger regional security and humanitarian crisis.

As of today there is no longer a separation of powers in Venezuela. Nicolas Maduro's regime has completed its telegraphed coup d'etat. DW's Uta Thofern says the situation in Venezuela is a scandal for the free world. (30.03.2017)