The Venezuelan military has declared its allegiance to President Nicolas Maduro, as the country faces a mounting political and constitutional crisis. Opposition lawmakers are seeking Maduro's removal. 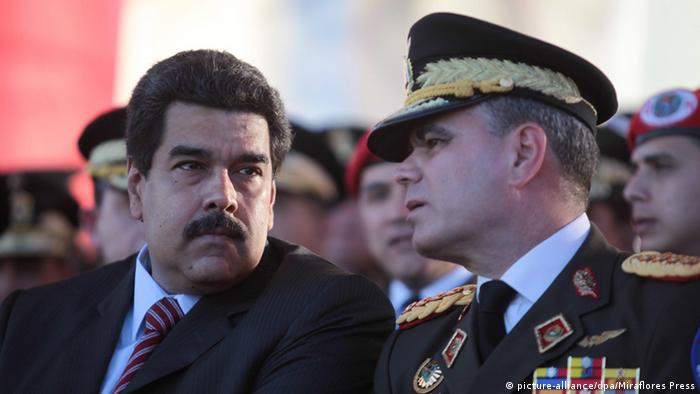 The National Bolivarian Armed Forces of Venezuela (FANB) pledged its loyalty to President Nicolas Maduro on Thursday, amid a standoff between his government and a newly elected legislature dominated by the opposition.

Center right opponents of Maduro's socialist government have vowed to remove the president from power within six months. It is the first time since 1999 - the year that former President Hugo Chavez came to power - that the assembly has been in the hands of the opposition. 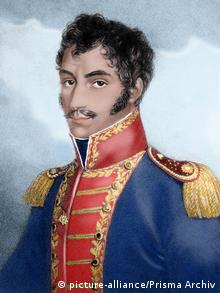 Simon Bolivar was a revered military and political leader who played a key role in the founding of Venezuela, Ecuador, Bolivia, Peru and Colombia as sovereign nations

However, defense minister and armed forces chief, General Vladimir Padrino (pictured right, with Maduro), entered the fray on Thursday, saying the military was unwavering in its support for Maduro. The president has himself vowed to resist "with an iron hand," and has already launched legal action to stop the opposition in its tracks.

"The president is the highest authority of the state and we reiterate our absolute loyalty and unconditional support for him," Padrino announced, reading a FANB communiqué.

The military also condemned the removal of portraits of both former President Chavez and Venezuela's 19th-century independence hero and "father of the nation" Simon Bolivar from the National Assembly. The military, said Padrino, had found that act an outrage to military honor and an affront to the doctrine of Bolivarianism.

In a move that has angered Venezuela's Socialists, the MUD has sworn in three lawmakers who were barred from taking their seats by the Supreme Court. The opposition won a majority in in the recent legislative elections. (07.01.2016)

"In unbreakable unity and conscious of the historic moment that our country is facing, the FANB expressed to all the Bolivarian people, its deep indignation at the disrespectful way, laden with arrogance and contempt, that the removal of the images has been ordered," he said.

Bolivarianism, as enshrined in the Venezuelan constitution since 1999, lists South American economic and political sovereignty, as well as democracy and transparency as being fundemental to the nation's values.

The support of the army will be a boon for Maduro as political battle lines appear increasingly difficult to resolve.

The opposition MUD coalition - which claims the president is responsible for soaring inflation and major shortages of basic goods - clinched a majority in the assembly for the first time in nearly 17 years at elections on December 6.

The opposition would rely on a two-thirds super majority in the National Assembly to be able to force out Maduro. Maduro's supporters claim the opposition does not have two-thirds of the delegates because three of its lawmakers were suspended pending allegations of electoral fraud.

Maduro's side has applied to the Supreme Court for any of the new assembly's legislation to be declared null-and-void.