In a move that has angered Venezuela's Socialists, the MUD has sworn in three lawmakers who were barred from taking their seats by the Supreme Court. The opposition won a majority in in the recent legislative elections. 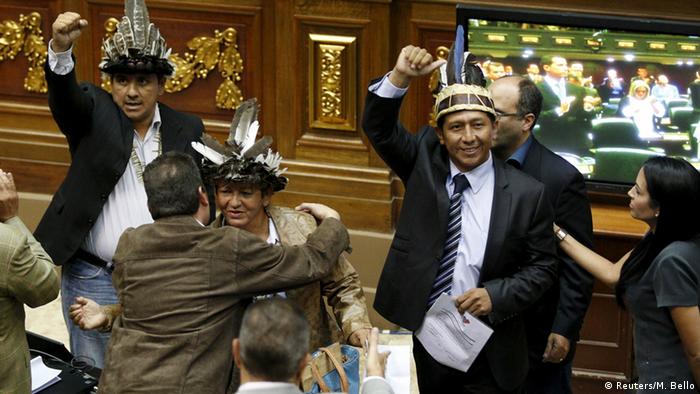 The three anti-government lawmakers from Venezuela's remote state of Amazona had initially been suspended over allegations of electoral fraud. The decision has met with outrage from the opposition MUD party, which claimed the injunction was an attempt by judges loyal to President Nicholas Maduro to undermine their landslide victory in last month's legislative elections.

The opposition coalition captured 112 of congress' 167 seats in the December 6 elections, giving it a crucial two-thirds majority by one seat. This "super-majority" will allow government critics to reprimand top officials and even rewrite the constitution.

Following the swearing in of the three members of parliament on Wednesday, Socialist lawmakers stormed out, vowing to charge the MUD with contempt of court.

"This assembly has totally lost its legitimacy," said the legislature's previous president, Diosdado Cabello. "There's no clash of powers here, it's as simple as this: The National Assembly has violated the constitution."

As well as swearing-in the suspended lawmakers, opposition leaders in congress also angered Maduro's supporters on Wednesday by ordering portraits of the late President Hugo Chavez to be removed from the National Assembly building.

The opposition took control of congress for the first time in 17 years on Tuesday, promising to oust Maduro within six months.

Besides unseating the president, who they view as corrupt, the MUD has also proposed a new law passing amnesty for some 75 political prisoners - a move which Maduro has vowed to veto.

December's election result was widely seen as a protest by voters over the state of the economy. Amid a deep recession, Venezuelans are suffering at the hands of soaring inflation and shortages of basic goods. Now they face the uncertainty of a political conflict.

In a move that could deal a massive blow to the opposition's super majority, Venezuela's socialists have filed legal complains against eight lawmakers. Opposition lawmakers have warned of an "attempted judicial coup." (29.12.2015)