The paper's general manager called the seizure, which followed a court ruling, "an attack on democracy." The move is the latest blow to press freedom in the Latin American country. 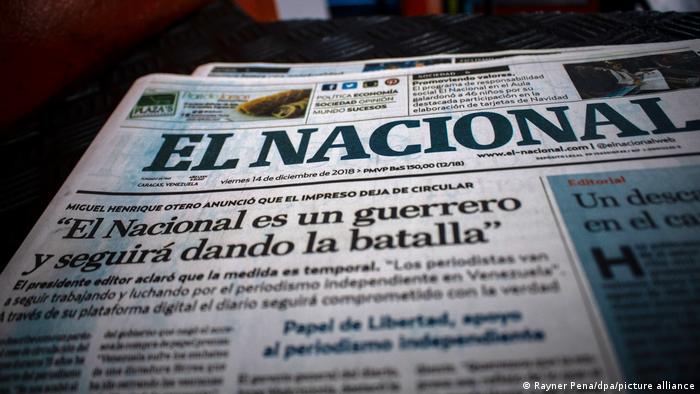 Venezuelan authorities seized the main offices of the anti-government El Nacional newspaper on Friday after the media organization failed to pay a $13 million (€10.7 million) fine related to a defamation ruling.

Venezuela's Supreme Tribunal of Justice (TSJ) ordered the paper to pay the fine last month, ruling on a 2015 lawsuit against the outlet filed by Diosdado Cabello, a lawmaker and member of the ruling United Socialist Party of Venezuela.

What were the defamation charges?

Cabello filed the suit after the paper republished a Spanish article which claimed US authorities were investigating him over alleged ties to drug traffickers.

"This afternoon, the corresponding courts, in response to my lawsuit against El National, have placed signage and notified of the seizure, and have initiated the process of paying the indemnity. We will overcome!" Cabello tweeted.

A lawyer working on behalf of the publication called the seizure "an abuse of authority." The paper's general manager, Jorge Makriniotis, slammed the move as an "attack on democracy."

"With this measure, they will not break our critical editorial stance on the government," Makriniotis said.

Miguel Henrique Otero, the editor-in-chief of the newspaper, also criticized the seizure.

"Due process has not been followed. This is an outrage that we must denounce to the world. They want to eliminate us, close us down and make it so we disappear off the map," he said.

The seizure of El Nacional's headquarters is the latest blow to press freedom in the Latin American nation.

US-based human rights foundation Freedom House has characterized Venezuela as "not free," with independent journalists risking "arrest and physical violence in connection with their work" in the country.

Venezuela is also ranked 148 out of 180 countries on Reporters without Borders' 2021 Press Freedom Index, with 180 being the worst.

Venezuelan President Nicolas Maduro has governed the country since 2013, following the death of socialist strongman Hugo Chavez. Critics of Maduro have characterized him as an authoritarian, while backers see him as a champion for the working class.

In January 2019, the country faced a political crisis, with National Assembly President Juan Guaido challenging Maduro for the presidency after elections in 2018.

The US, EU and multiple western nations recognized Guaido as Venezuela's leader, but his support has declined among Venezuelans following a failed military revolt in April 2019.

Luz Mely Reyes has for years stood up for freedom of the press in Venezuela. She has now been honored for her commitment, and in Berlin was presented with this year's German-French Prize for Human Rights.

According to the social media platform, Venezuela's president posted misleading information about the coronavirus that "violated" its policies and put people's health at risk.