Venezuela is giving the EU ambassador 72 hours to leave the country, again. But the bloc insists on negotiations. 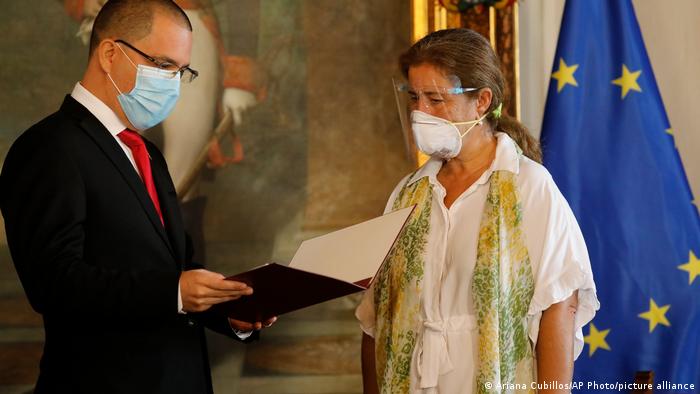 Venezuela has expelled the head of the European Union's delegation in Caracas with 72 hours to leave the South American country, Foreign Minister Jorge Arreaza said on Wednesday.

"By instructions of the President Nicolas Maduro, the ambassador of the European Union in our country, Isabel Brilhante Pedrosa, is declared as 'persona no grata,' she has 72 hours to leave Venezuela," the foreign ministry said on Twitter.

"Hopefully there will be reflection in the European Union, hopefully we will be able to rebuild the bridges of understanding, of dialogue, hopefully they will learn to respect," Arreaza said, according to AFP.

How did the EU respond?

The EU has demanded Venezuela reconsider the expulsion decision.

"The EU profoundly regrets this decision, which will only lead to further international isolation of Venezuela. We call for this decision to be reversed," EU spokeswoman Nabila Massrali said.

"Venezuela will only overcome its ongoing crisis through negotiation and dialogue, to which the EU is fully committed but which this decision undermines directly," Massrali added.

Last year, Maduro had also given the Portugese national Brilhante Pedrosa 72 hours to leave the country in response to previous sanctions.

But the government later agreed with the EU to suspend the expulsion.

Why did the EU impose sanctions on Venezuela?

On Monday, the EU imposed new sanctions on 19 officials after Maduro's allies won legislative elections, which the opposition deemed fraudulent.

The restrictions targeted a governor, members of the National Assembly, the commander of the armed forces and three members of Venezuela's electoral council, including its president.

Since 2017, the bloc has imposed restrictions on Venezuelan officials, including travel bans, asset freezes and an embargo on arms that authorities could use in human rights violations.

The new sanctions bring up the total number of targeted Venezuelan officials to 55.