Vatican under pressure as wartime pope is moved closer to sainthood | Europe | News and current affairs from around the continent | DW | 19.12.2009

Vatican under pressure as wartime pope is moved closer to sainthood

Pope Benedict XVI is facing criticism after he put a controversial wartime predecessor one step closer to sainthood. Jewish groups say Pope Pius XII did not do enough to save Jewish lives during the Second World War. 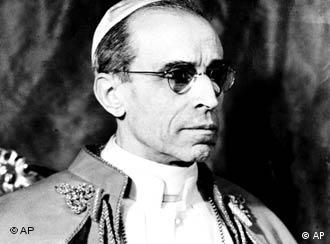 The Vatican is at the center of criticism over a move that places former pope Pius XII closer to becoming a saint.

Pope Benedict has approved a decree that recognizes the pontiff, who is accused of doing too little to help Europe's Jews during World War II, as having "heroic virtues." The posthumous honor gives the former pope the title "venerable" and places him two steps from full canonization.

Pius XI has been accused of turning a blind eye to the Nazi genocide of the Jews, in a controversy that has strained relations between the Vatican and Israel.

When a department within the Vatican submitted the decree to the Pope in 2007, it was decided that any decision should be postponed for a "period of reflection."

Pope Benedict's latest decision means that Pius now needs only to be beatified as the next step before he can be canonized as a saint.

Attempts to beatify the former pope had been described as "unacceptable" by Israel's social affairs minister Isaac Herzog, who says that the Vatican's own laws required action at the time.

"Throughout the period of the Holocaust, the Vatican knew very well what was happening in Europe," Herzog told the Haaretz newspaper in 2008.

Jews have called on the Vatican to open archives on Pius and to freeze the process that could make him a saint. They want the documents to be examined by scholars.

The current pope, who as a child was a member of the Hitler Youth, has defended Pius. The Vatican maintains that he saved many Jews, hiding them in religious institutions, and that he kept silent to avoid aggravating their situation.

Catholic supporters of Pius, who was pope from 1939 to 1958, have pressed for the process of his sainthood to be accelerated.

Pope Benedict XVI is on his first trip to Israel. He has used a speech to seek to heal the wounds created by, among other things, his reinstatement of a Holocaust-denying bishop. (11.05.2009)

Will the Vatican's Secret Archives Shed Light on Pius XII?

Critics accuse Pope Pius XII of keeping quiet about the Holocaust. Documents soon to be released from the secret archives may provide insight on the Vatican behind the scenes, said church historian Hubert Wolf. (23.09.2006)