A Polish monsignor announced he was "happy and proud" to be a gay priest on the eve of a large synod set to discuss Catholic teachings on lesbian and gay believers. The Vatican has stripped the priest of his position. 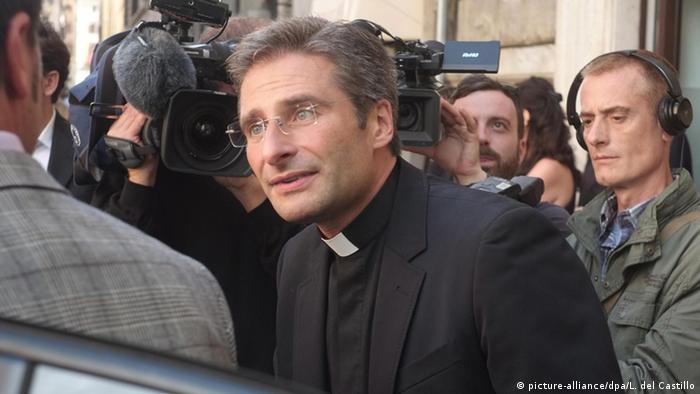 Father Krzysztof Olaf Charamsa said he wanted to challenge Church's "paranoia" towards sexual minorities, stating in two interviews published Saturday that he was in a relationship with a man.

"The clergy is largely homosexual and, unfortunately, it is also homophobic to the point of paranoia but paralyzed by the lack of acceptance for its own sexual orientation," he told the Polish version of "Newsweek" magazine.

Charamsa also said he was "happy and proud" to of his identity, in the remarks published by the Italian daily "Corriere della Sera."

The 43-year-old Polish theologian has been living in Rome for the last 17 years, where he also worked as a mid-level official in the Vatican's doctrine office.

"It is time that the Church opened its eyes to gay believers and understood that the solution is it proposing - total abstinence and a life without love - is not humane," he said.

The Catholic Church teaches that being gay is not a sin but also that homosexual acts are.

Charamsa's move comes only a day before Pope Francis is due to open a large synod on marriage and family in Vatican. The meeting is set to last three weeks and involve 270 Catholic bishops, who could also review Vatican's approach to gay relationships, alongside other issues on the agenda.

Immediately after Charamsa's coming out, the Catholic Church dismissed the priest from his post the congregation of the Doctrine of the Faith, where he has worked since 2003.

In a Saturday statement, the Church officials said Charamsa's personal situation merited "respect," but added that his statements aimed to "subject the Synod assembly to undue media pressure." The Vatican also stated that Charamsa's statements appear "very serious and irresponsible."

Although Charamsa is no longer allowed to work at the Vatican or its pontifical universities, he remains a priest. The issue of his defrocking remains to be decided by his local bishop.

The Polish cleric held a press conference with his partner, a Spanish gay rights activist, in Rome on Saturday.

"I dedicate my coming out to all gay priests," Charamsa said, adding that he had plans to write a book about his time at the Vatican. "I wish them happiness even if I know that most of them will not have the courage to make the gesture I have made today.

"To my Church, I want to say that I reject and I denounce the current atmosphere of exasperating homophobia," he added. "Open your eyes to the suffering of gay people, to their desire for love."