Vandals deface monument to Jewish massacre | Europe | News and current affairs from around the continent | DW | 01.09.2011

A Polish monument to the more than 300 Jews killed in the Jedwabne pogrom during World War II has been vandalized, as police investigate its connection to an ongoing bout of attacks on minorities. 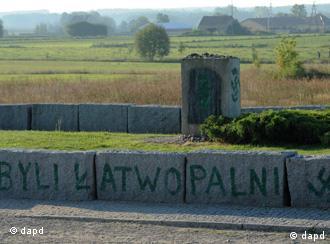 One of the inscriptions read, "They were flammable"

A monument commemorating Jews killed in Poland during World War II was desecrated with swastikas and green paint on Thursday, the latest in a series of attacks targeting minorities.

Unknown suspects covered the Jedwabne monument with Nazi symbols and spray painted on a nearby fence, "I am not sorry for Jedwabne," and, "They were flammable."

Jedwabne, in eastern Poland, was the site of the massacre of at least 340 Polish Jews when Nazi officers oversaw a group of ethnic Poles who locked the victims in a barn and burned them alive.

The exact details of the killings went unacknowledged until, in 2004, a Polish government investigation found that Poles, and not German Nazi, were to blame.

A monument was erected at the site to commemorate the pogrom on its 60th anniversary.

Local police said they were investigating the attack in connection with a series of recent incidents targeting Lithuanians and Muslims, after an Islamic cultural center in the nearby city of Bialystock was attacked.

Ceremonies are taking place in Poland this week to mark the 70th anniversary of a series of massacres committed by Poles against their Jewish neighbors during World War II. But some groups are still in denial. (12.07.2011)

Jedwabne stands for one of the darkest chapters in Polish history - the murder of Jews seventy years ago, not by Nazis but by Poles. (11.07.2011)