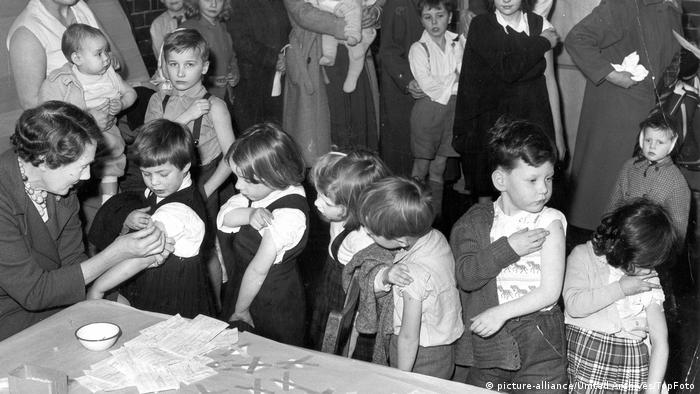 Since the COVID-19 pandemic began, we have been waiting for a vaccine: a hero in a syringe to end the pandemic and give us our normal lives back.

Unfortunately, however, the process of modern vaccine production is time-consuming and far from easy. After the right molecules have been discovered, the vaccine has to pass through a series of preclinical and clinical trials in which it is tested on animals and humans.

Then, a company has to apply for approval by the competent public health agency in the country or region of production, such as the FDA in the US or the EMA in Europe. If a vaccine does receive approval, it then has to be mass-produced and distributed, possibly worldwide.

In centuries gone by, however, producing a vaccination was not such a tedious task. Even clinical trials were easy back then: One could just try it on a servant and hope for the best!

The concept of vaccination is pretty simple. It is based on the response of our immune system. Whenever our immune system encounters a disease-causing foreign body in the form of a virus or bacterium, it produces antibodies against part or parts of it. Upon a second encounter, the antibodies catch the pathogen and prevent it from causing illness.

But some diseases are deadly or cause severe symptoms, so it is better to avoid them once and for all by being vaccinated, if possible. A vaccine contains inactive or weak viruses or bacteria that the body can use as a template to produce antibodies without getting ill.

Although some vaccines cause symptoms such as mild fever or fatigue, these are usually not nearly as bad as those caused by the actual illnesses.

Whose idea was vaccination?

In 1796, the English physician and scientist Edward Jenner attempted the first vaccination procedure against smallpox using material from a lesion caused by cowpox, a disease contracted from a similar virus. Jenner is now widely known as the "father of immunology."

Interestingly enough, however, Jenner did not discover vaccination: He just popularized a common concept called "variolation." The word variolation is derived from "variola," the name given to the virus causing smallpox.

At the time, variolation meant using dried scabs from a smallpox patient to give another person immunity. A person who has been variolated will develop a milder course of the illness.

Many of us have experienced chickenpox, but this illness is very different from smallpox, despite the similar name: While both viruses attack skin cells and form a rash, smallpox is more drastic, and survivors are left with severe scarring. Smallpox is one of the deadliest diseases known to humankind. Thirty out of 100 people infected by smallpox used to die of the disease.

As mentioned above, variolation used dried scabs from smallpox that harbored the virus. Several methods were followed.

Some physicians rubbed the dried scabs against the skin of the person who was to be made immune. The Chinese ground the dried scabs into powder, exposed it to hot steam, which damaged the viral particles and reduced the amount of infection that could be transmitted, then blew the powder up a person's nose.

The most popular variolation method in Europe was inoculation: The smallpox material obtained from a patient or a victim was injected subcutaneously into a person using a needle. It now sounds somewhat barbaric to insert a needle harboring a dangerous virus into someone, especially given the fact that there was no guarantee of surviving the procedure. But smallpox was such a serious matter that the risk seemed worth taking for many.

Where did variolation start?

Variolation can traced back to China, India and the Arabian Peninsula; the origin not quite clear. The practice then reached Constantinople, today's Istanbul, brought there by people from North Africa or the Arabs.

In 1718, Lady Montague, the wife of the British ambassador, decided to variolate her son in Constantinople after learning about the practice. She herself had previously become infected with smallpox and was left with severe scars which deformed her face.

When she went back to Britain, she shared the idea with her friends and members of the royal family, who had themselves variolated. This was a very smart move, because a smallpox epidemic was rampant in Europe at the time.

How important is herd immunity?

In 1721, a Scottish surgeon, Charles Maitland, performed a variolation trial on six prisoners. They all survived, and when exposed to smallpox, they proved to be protected, or "immune," as we say in modern medicine.

Maitland also variolated two princesses of Wales, which made the practice fashionable in Europe. African slaves introduced variolation to colonial America; trials were carried out in Boston by Reverend Cotton Mather.

Variolation is not risk-free; in fact, variolated individuals could spread the virus and even die themselves. However, the death rate was significantly lower — 1 to 100 — when a person acquired the virus through variolation as opposed to becoming infected naturally.

In the 18th century, that must have been considered an acceptable risk. Variolated individuals also came down with a milder form of smallpox than if they had been infected by chance, because the dried scabs used in the procedure carried a weaker form of the virus.

The fact that people who milk cows didn't get infected with smallpox was common knowledge by the 18th century. The reason is their previous infection with cowpox. The cowpox virus belongs to same family as the variola virus that causes smallpox and share structural similarities with it. The human body thus produces antibodies against the cowpox virus that could also be effective against the smallpox virus. 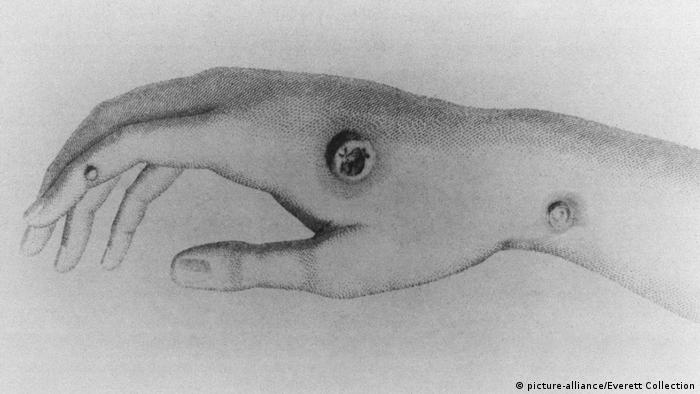 Edward Jenner learned that a milk maid, Sarah Nelmes, had cowpox. He inoculated James Phibbs, an 8-year-old boy, with cowpox virus from pustules on the milk maid's hands. Months later, Jenner exposed the boy to smallpox; he didn't become infected. He replicated his trial on more people with success.

In 1801, Jenner published "The Origin of Vaccine Inoculation" and became known as the discoverer of modern vaccines. The term vaccine is derived from the word "vacca," which means cow in Latin, because Jenner used cowpox to prove his observation.

Read more:  Polio eradication in Africa points to challenges ahead

Vaccination to fight smallpox started in 1796. Unlike variolation, which used the smallpox virus, vaccination followed Jenner's example of using the less dangerous cowpox virus to create immunity against smallpox.  At the beginning, doctors used a needle carrying the cowpox disease and inoculated by scratching the skin. In later years, the syringe was invented, making it easier to deliver the vaccine.

In 1959, the World Health Organization initiated a global smallpox eradication campaign. After many challenges were overcome, the WHO announced in 1980 that the disease had been eradicated.

The smallpox virus roamed the earth for 10,000 years and killed billions of people, with an estimated death toll of 300-500 million in the 20th century alone. The vaccine has not only prevented many deaths, but saved millions of children from having to endure scarring or deformities for the rest of their lives.

A functioning immune system is crucial in the fight against COVID-19. To maintain it, the body needs sufficient vitamins and other nutrients. But that is exactly what many people lack. (07.05.2020)

Vitamin D plays a role in almost all processes in our body. Now, one study says that a lack of vitamin D could also worsen the spread of COVID-19. Can this be? (08.07.2020)

HIV: In Good Shape talks to an expert