The Nigerian striker believes a Barcelona victory would help them cement their status as one of the best women's football teams ever. But first, they have to overcome an illustrious old opponent and some bad memories. 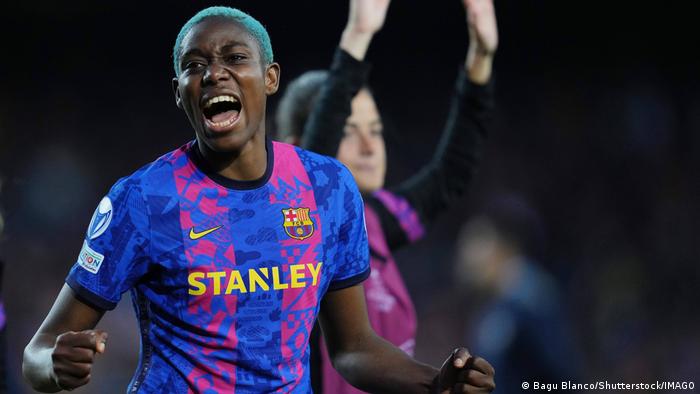 Her team has been heralded in some quarters as the best women's side ever, but Barcelona striker Asisat Oshoala believes it is her opponents that still set the benchmark.

"Lyon is the team to beat in Europe," she said of the French side led by defender Wendy Renard and star striker Ada Hegerberg , speaking at a media event attended by DW.

"We're not looking for revenge [for the final defeat in 2019], but we want to put up a better show. We don't want a repeat of the last loss. We want to show the world we've improved, a better team than they saw three years ago.

"Lyon are the favorites. They are trying to regain their position, so I think it is going to be a very interesting game." 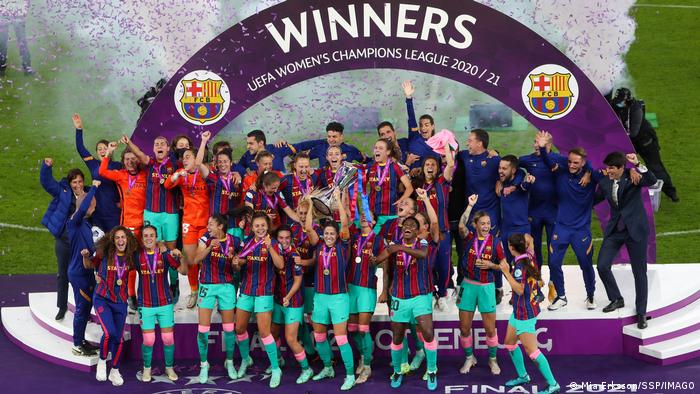 After a record-breaking season where they won all 30 games in the Spanish league, Barcelona face the team that beat them in the 2019 final, when Oshoala scored in a 4-1 loss. After winning the competition for the first time last season, the Catalans are desperate to retain the trophy.

"We hear what people are saying about us, asking why are we getting so much attention? Our aim is to win it again this year," Oshoala added.

A role model for African girls

Oshoala's journey from Ikorodu, a Lagos suburb, to the top of the women's game received a major boost when she led Nigeria to second place behind Germany at the 2014 Women's Under-20 World Cup.

Finishing as top scorer with seven goals, she was thrust onto the world stage. Her career led her to Liverpool, where she became the first African to compete in the top division of English women's football.

A year later she was snapped up by Arsenal where she won the FA Cup before moving to Dalian Quanjiang. She was top scorer for her new side as they won the Chinese league title in successive seasons.

A subsequent six-month loan deal to Barcelona in 2019 quickly became permanent and she has thrived in Catalonia.

These days she is considered Africa's leading women's footballer. Back in Nigeria, the 27-year-old is a role model to many girls who see her path to global recognition as one they too can take, but Oshoala dismisses any suggestion of a weight on her shoulders.

"I don't consider it pressure; I love my job, I'm having fun. I see it as something that I do because I love the game and I inspire people, so it makes it easier to keep doing it," Oshoala said in response to a question from DW.

"I know that there are a lot of kids in Africa that look up to me. I just want them to know: be yourself, do your best all the time, win whatever you can win. I've been Africa's best player four times: when I was younger I never dreamed of this. I was only doing my thing."

"I'm just trying to give hope to the kids in Africa that they can get to the top if they put in their best in whatever they are doing."

Along with the Primera Division title this year, Oshoala scored 20 goals to pick up the Pichichi award for highest scorer. In July she will join up with a Nigeria side aiming to retain its Women Africa Cup of Nations title in Morocco. Could this be enough to put her in the running for the Ballon d'Or?

"I'm just a girl who loves football. I think people out there who see my game would be the ones to decide if I deserve the award. If they say I am good enough, sure. I just want to go out there and score goals; that's what makes me happy. Whatever award that comes is secondary."

It has been a year of unprecedented success for women's football. Barcelona twice packed more than 91,000 fans in the Camp Nou during this season's Champions League. The final at the Juventus Stadium in Turin is expected to sell out its 41,507 seats, with accommodation difficult to secure in the city center.

"I have to pay more now for family and friends. It is quite expensive," said Oshoala. 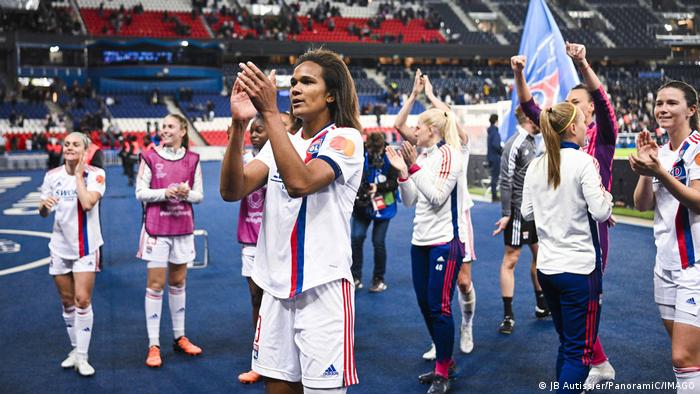 Seven-times champions Lyon hope to return to the top

"But also this is what you want to see. We always dreamed of getting to this level where tickets are hard to find. Right now you can't get tickets to the game.

"I love the energy we are getting for the game. Everyone in women's soccer must be proud of how far we've come.

"I have to spend more, but I love it," she laughed.

After a great start, Oshoala missed around five months of this season owing to injury. She has put the "difficult" period behind her and now hopes to end the season on a high, with Barcelona still to play the Copa de la Reina (Spanish Cup) semifinal, and perhaps the final, after the Champions League.

"I have had a rollercoaster of emotions this year. I have laughed, cried and smiled. Mentally it is really draining, but this is professional sport and things happen," she said. "At the end of the day, I just want to be happy at the end of the season."

How FC Barcelona Femení became the best team in Europe

Thanks in part to Nicole Billa's goals, Hoffenheim are taking on Europe's top clubs in the Women's Champions League this season. But not even the Austrian striker could prevent heavy defeats to Arsenal and Barcelona.

A record 91,553 attended Barcelona vs. Real Madrid on March 30 as women's football enjoys more exposure and interest than ever. But average attendances are still below 1,000 in Europe's top leagues.

After losing 5-1 in Barcelona, Wolfsburg were facing an uphill battle in their semifinal second leg. But the Wolves went out with heads held high in front of a record home crowd.