Using art to help Syrian refugee children cope with trauma | Germany | News and in-depth reporting from Berlin and beyond | DW | 18.10.2015

Many of the Syrian refugee children coming to Germany are traumatized by what they have experienced in the war-torn country. Kurdish artist Hassan Deveci has opened his Cologne studio to help them deal with their trauma. 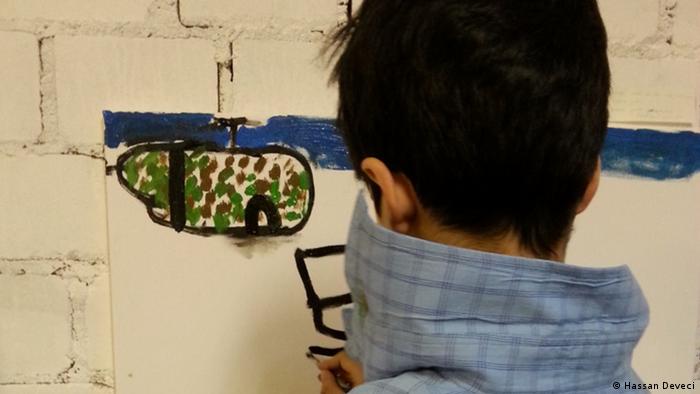 Bombings, destroyed houses, camouflaged helicopters - many of the refugee children's paintings shown in a Cologne studio depict those scenes because that's what the kids remember all too well from living in, or fleeing from, war-torn Syria.

Thirteen-year-old Avjin pointed to her painting of a girl lying on a surgical table. "Her heart is bleeding, she doesn't feel well," she said.

Another young girl painted how bombs are falling onto a red brick house. "Helicopters came to destroy my school," she told DW. "Some of the children survived, but some of them didn't."

Over the course of the year, Kurdish art therapist Hassan Deveci has helped children come to terms with traumatic experiences. He opened his studio to a group of 12 Syrian refugee children between the ages of 8 and 14. He said most of the paintings have a common theme: war and death.

"Of course the kids also try to make beautiful paintings - even though beautiful does not exist in art therapy," he said. "But, if you compare a flower painting with a helicopter, the one with the flower is obviously more beautiful. However, such paintings are rare." 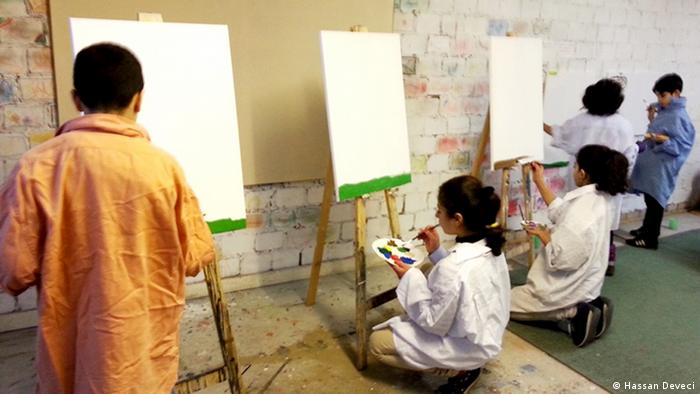 All of the children involved the art project have been going to school in Germany for about a year. They have quickly picked up the language and don't stand out when they're playing, singing, dancing and laughing with their classmates.

But that is deceiving and function as a coping strategy, Deveci said. "I can see the sadness in their eyes and their laughter doesn't come from the heart," he said.

"I was shocked by the paintings," said Nasrin Mohammad, mother of Avjin and two younger boys.

When the children are at home, they listen in when she talks to their grandparents on the phone, she said. "They realize what is going on," she said, adding that she sometimes tells the grandparents to call when the kids are at school.

Avjin's family came to Germany almost one and a half years ago. Unlike other Syrian families involved in the art project, they only have a temporary residence permit. Her family has to stay in a hotel in central Cologne until the German authorities have decided whether they are allowed to remain in the country.

Deveci, 43, said he can understand the uncertainty that comes from being a refugee in a foreign land. He fled Turkey in the mid-90s because of political oppression of the Kurdish minority there. He applied for asylum in Cologne in 1994 and had to wait more than three years later, after staying at a makeshift camp, a hotel and a shared flat with two other refugees, until he was ultimately granted asylum. His memories of those years are grim. 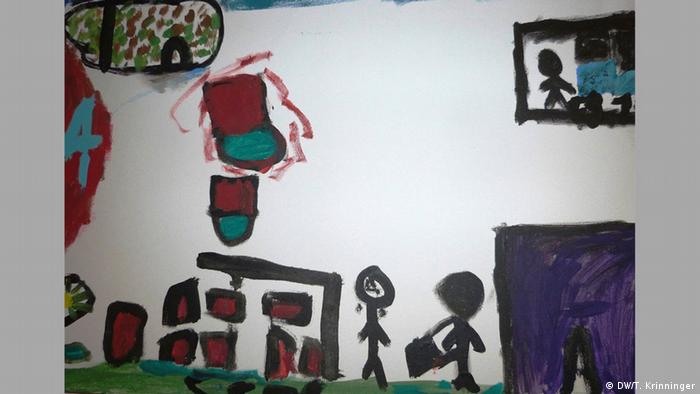 Bombings and destroyed houses are the most common themes

"We weren't allowed to do much. We had nobody, and we couldn't speak German - these were bad times," he recalled. Deveci, who also goes by his Kurdish family name, Malmime, now creates artworks that mostly reflect societal realities.

Deveci said his personal experience motivates him to help the refugee kids and their families. In 2014 he contacted the German Red Cross and a Cologne-based Syrian support group, who helped him in get in touch with Syrian families.

The parents involved very much appreciate his initiative - for both emotional and practical reasons.

"I came here only because of my children, to give them a better life," said Dilxwesh Hasan, father of four children. He said he felt happy when he saw his children enjoying themselves while drawing. "They have fun," he said. "They can meet their friends and they open up."

"The workshop is good because it does not just improve the children's painting skills but also their German," Avjin's mother said. 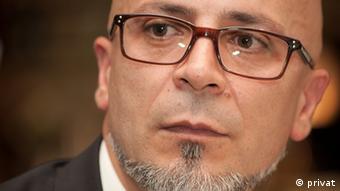 Kurdish artist Deveci, who runs the workshops, came to Germany as a refugee as well

The kids have undergone quite a transformation over the past year, Deveci said. "At the start, two kids had real problems with concentration and the German language, but this changed after six months. They became much more open and self-confident," he said.

Such private initiatives, however, cannot be sustained forever, Deveci added. He had to reduce the number of days children can come into the studio from weekly to once or twice a month because he ran out of material and money. He said he is just one of many people doing volunteer-work for refugees in Cologne.

The artist has become part of a welcoming culture, something that he would have wished for 20 years ago when he arrived in Germany: Back then, he says, he did not come across one single such initiative.

For a while, it seemed like they were a thing of the past. But now, nationalist groups and right-wing political parties are gaining ground in mainstream politics as a consequence of Germany's massive refugee influx. (14.10.2015)

Refugees have filed a lawsuit against Berlin's largest registration center for failing to register them, a necessary step to receiving social benefits. An official said the court has seen similar cases in the past month. (12.10.2015)