The US and Turkey have agreed to resume full visa services that were halted over the arrest of staff at US consulates. Despite the announcement, both sides appeared to disagree on what they agreed on. 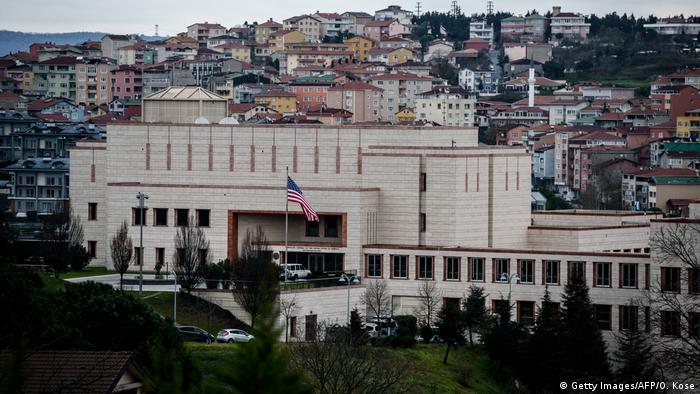 The United States and Turkey have resumed offering full visa services, the embassies in Ankara and Washington said on Thursday.

The United States halted full visa services to Turkish nationals in October following the arrest of Metin Topuz, the second local employee at a US consulate to be detained this year. Turkey responded with a tit-for-tat move halting visa services to US citizens.

The diplomatic spat has added to already strained ties between the Washington and Ankara. The NATO allies are at odds over US support for Kurdish forces in Syria and a massive crackdown in Turkey in the wake of the July 2016 failed coup attempt that authorities there blame on US-based preacher Fethullah Gulen.

The US Embassy in Ankara said in a statement it was "confident that the security posture has improved" after receiving assurances from Turkish officials.

The Turkish government has kept "high-level assurances" that no additional local staff at the US mission are under investigation or will be arrested for conducting official duties, the US Embassy said. In November, those assurances prompted the US and Turkey to resume limited visa services.

Turkish authorities also committed to inform the US government in advance if the local staff is going to be detained or arrested in the future, the US Embassy said.

But in a sign Ankara and Washington are still in disagreement, the Turkish Embassy said in a statement that no assurances had been given.

"Regarding the US statement about assurances, we want to emphasize that Turkey is governed by the rule of law, that our government didn't give any assurances related to ongoing legal proceedings and no one working for diplomatic missions in our country faces criminal proceedings related to official work," the Turkish Embassy said.

"We do not find it right that the United States makes claims about assurances and misinforms the Turkish and American public," it said.

The Turkish embassy also said it was worried about its nationals detained in the United States.

This apparently refers to a Turkish banker on trial for violating US sanctions on Iran, an explosive case that threatens to reach Turkish President Recep Tayyip Erdogan and his inner circle.

Two Turkish nationals also plead guilty this month in a US court over their role in a brawl involving the president's security detail and anti-Erdogan activists in Washington in May.

The US Embassy said it was still concerned about American citizens arrested in Turkey as well as both Turkish national employees, who remain in detention.

Howard Eissenstat, a Turkey expert at St. Lawrence University, pointed out that the US State Department refrained from demanding its consular staff to be released or evidence provided against them.

"Whatever the wisdom of the original slowdown in consular services, this is an embarrassing retreat," he wrote on Twitter.

Topuz stands accused of having ties with the Gulen movement, which Ankara blames for the July 2016 failed coup attempt.

He worked with the US Drug Enforcement Agency and in that capacity would have had official contacts with Turkish security services. Turkish authorities accuse him of making contact with figures involved in the coup attempt.

Hamza Ulucay is a Turkish translator at the US consulate in Adana for 36 years.

He has been charged with being a "member of a terrorist organization."

Ironically, he is accused of being a member of the Gulen movement and Kurdistan Workers' Party (PKK), two ideological rival groups.

Among the evidence prosecutors have brought against Ulucay are 21 $1 bills found in his home.

According to the Turkish government, coup participants carried $1 bills to show that they were part of the plot.

Turkish guards indicted in US over attack on protesters

Nineteen people, including 15 Turkish guards, have been indicted in a US court for attacking protesters in Washington earlier this year. Turkey has argued that the guards have diplomatic immunity. (30.08.2017)