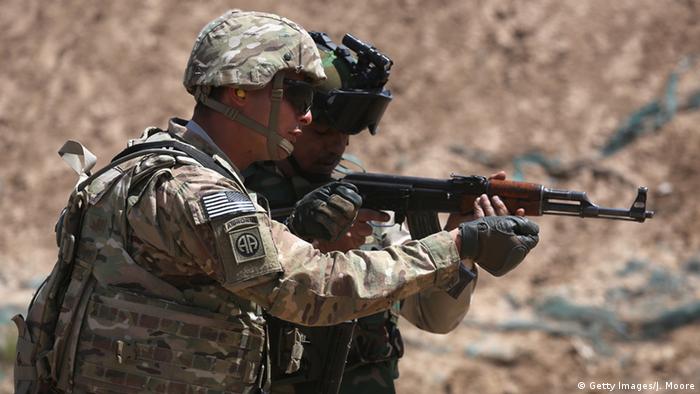 The military base was used by US, Australian and New Zealand forces to train Iraqi soldiers.

"Other sites in the camp will be handed over according to a timetable," al-Khafaji added without providing more details.

Historically, the site housed up to 2,000 coalition members, most of whom have departed in recent months. Remaining troops will leave in the coming days after handing over the equipment to Iraqi security forces.

It was the eighth transfer of a part of an Iraqi base to Iraqi forces in the past months.

Read more: US launches airstrikes in Iraq against Iran-backed militia

'Part of a coordinated plan'

The coalition forces in Iraq have long supported local troops in a years-long campaign against the "Islamic State" (IS) jihadi group. It has also backed Kurdish forces that defeated IS in neighboring Syria.

The Taji base, 20 km (12 miles) north of Baghdad, has frequently come under attack by Iran-backed militias in recent months.

Read more: Iraq: Taji military base hit by rockets for second time in a week

But the coalition forces said the withdrawal from Camp Taji was "part of a long-range plan coordinated with the government of Iraq."

In January, the Iraqi parliament approved a resolution to end the presence of foreign troops in the country. The move came after a US airstrike in Baghdad killed top Iranian commander General Qassem Soleimani.

Baghdad and Washington agreed in June to continue reducing the number of troops stationed in Iraq.

On Friday, Prime Minister Mustafa al-Kadhimi said the US forces would withdraw from Iraq over the next three years.