US to close Palestinian mission in Washington, says PLO

The PLO harshly criticized the Trump administration's decision to shutter its de-facto embassy in Washington. The move follows massive cuts in US aid to Palestinians. 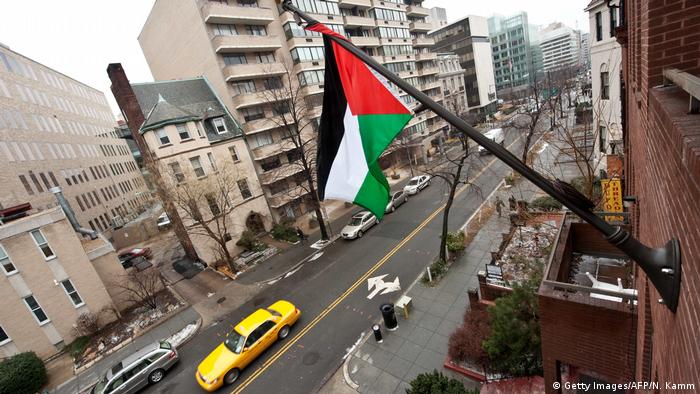 The United States on Monday said it would close the Palestine Liberation Organization's (PLO) mission in Washington.

"This is yet another affirmation of the Trump administration's policy to collectively punish the Palestinian people, including by cutting financial support for humanitarian services including health and education," he said in a statement.

The move to shutter the PLO's de-facto embassy comes after Palestinians cut off contact with the US government after President Donald Trump recognized Jerusalem as the capital of Israel in December.

It also comes as the Trump administration is set to release its own much praised Middle East peace plan, although it is unclear what it entails or when it will be released.

The State Department blamed the Palestinians for being unwilling to negotiate.

"PLO leadership has condemned a US peace plan they have not yet seen and refused to engage with the US government with respect to peace efforts and otherwise," State Department spokeswoman Heather Nauert said in a statement. "As such, and reflecting congressional concerns, the administration has decided that the PLO office in Washington will close at this point."

The Trump administration has been ratcheting up pressure on the Palestinians by cutting over $200 million (€173 million) in bilateral aid. The US has also pulled its support for the UN agency responsible for 5 million Palestinian refugees.

Palestinians argue Israel's right-wing government is not genuinely interested in a two-state solution as evinced by continued Jewish settlement building in the occupied West Bank.

The PLO is an umbrella group that was created in 1964 to represent various Palestinian factions seeking self-determination. The PLO also runs the PA, the semi-autonomous, interim government that manages certain areas of the Palestinian territories.

The move also comes amid US concerns over attempts by Palestinian officials to have Israel investigated for war crimes at the International Criminal Court (ICC) in The Hague.

Erekat said that Monday's decision to close the PLO's office in Washington shows the lengths that the Trump administration is willing to go to "in order to protect Israeli crimes" against Palestinians.

He added that "the rights of the Palestinian people are not for sale."

The US is also preparing to adopt an aggressive stance against the ICC should they proceed with an investigation into alleged war crimes committed by the US in Afghanistan as well as a possible probe against Israel.

Trump's national security adviser, John Bolton, said Monday that any probe against the US or Israel could lead to sanctions against the ICC.