US Supreme Court rules in favor of gay marriage nationwide | News and current affairs from Germany and around the world | DW | 26.06.2015

US Supreme Court rules in favor of gay marriage nationwide

The US Supreme Court has ruled in favor of marriage equality. Though same-sex couples can now marry nationwide, LGBT Americans remain vulnerable to discrimination in other areas of life. 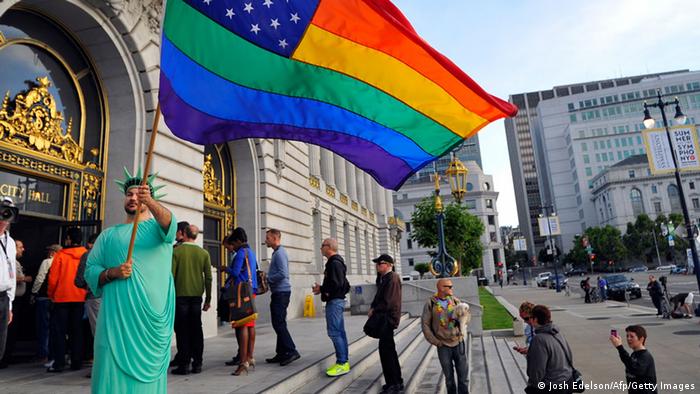 Jim Obergefell was never an activist.

He led the mild-mannered life typical of people in Ohio. Obergefell and his long-time partner, John Arthur, were open in their professional and social lives. But they weren't actively involved in the gay rights movement.

"Our brand of activism was where do I sign the check," Obergefell said.

A former German teacher turned real estate agent, he found acceptance among family, friends and co-workers after coming out in 1992. But Cincinnati, the Ohio city where he lived, also had an intolerant side at the time. 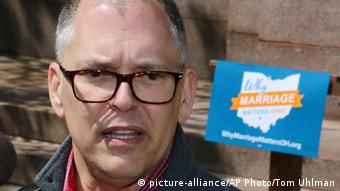 Obergefell sued for his right marry

In 1993, voters approved an amendment that stripped gay and lesbian residents of their status under the city's non-discrimination law. The amendment even banned Cincinnati's City Council from passing future legislation that would protect gays and lesbians.

"There's no other way to phrase it - it was just pure hatred for the gay community," Obergefell said.

Cincinnati has come a long way since those days. Voters repealed the amendment in 2004, and City Council passed new legislation in 2006 shielding the LGBT community from discrimination in housing and employment.

The city also supported Obergefell in his battle for marriage equality, which took the 49-year-old all the way to the nation's highest court in Washington, D.C.

The Supreme Court on Friday ruled that same-sex couples have a constitutionally protected right to marry in all 50 states.

"It's amazing to me that our decision to stand up and say we're tired of being second class citizens has the potential to impact our entire country - millions of people," Obergefell said.

Obergefell and Arthur were married in a medical jet on the tarmac of Baltimore airport in Maryland, a state which had legalized same-sex marriage through a voter referendum in 2013.

Arthur had contracted ALS, a neurological disease in which the muscles waste away, and could hardly travel due to his deteriorating physical condition.

Family and friends helped pay the $13,000 for the medical plane. The couple chose Maryland because, unlike many other states, Jim could pick up the marriage license by himself, sparing Arthur unnecessary physical burdens.

Though they were thrilled to be married after 20 years of commitment, reality set in when the newlyweds returned to Ohio. Not only had the Midwestern state outlawed gay marriage, it also refused to recognize same-sex marriages performed in other states.

After speaking with a civil rights attorney, they realized that when Arthur succumbed to his condition, he would be listed as unmarried on his death certificate.

"It broke our hearts and it made us mad," Obergefell said. "We shouldn't be told that, no other couple like us should be told that. It isn't right, it isn't just."

Like Obergefell, Kelly Noe and Kelly McCracken were not active in the gay rights movement.

Noe always wanted a family; McCracken never dreamed of it. The two met at a club in Cincinnati where McCracken's band was playing. In 2011, they married in Massachusetts, another state that legalized gay marriage. 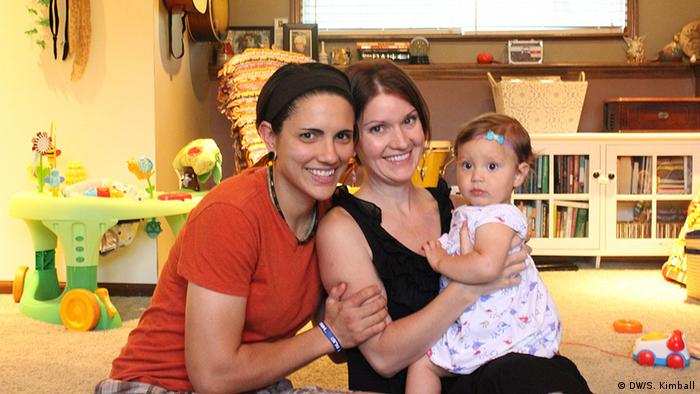 It took the impending birth of their daughter for Noe, right, and McCracken to become involved in the gay rights movement

They knew Ohio wouldn't recognize their Massachusetts marriage license. But marriage inequality didn't stir them to take action. At the time, they were simply happy to have each other.

Everything changed when they decided to have a baby. While Noe was pregnant with their daughter, Ruby, the reality set in that McCracken's name would not be on the birth certificate.

"In Ohio, Ruby is hers," McCracken said. "I might as well just be the next door neighbor if something were to happen, if I take her to the hospital."

Battle in the courts

So they all sued the state of Ohio.

Eleven days after marrying Arthur in Maryland, Obergefell was in a federal court in Cincinnati. Noe and McCracken, pregnant with Ruby, also made their case. The judge forced Ohio to properly complete birth and death certificates for same-sex families.

Arthur passed away on October 22, 2013. His death certificate listed him as married to Obergefell. Ruby was born on June 7, 2014. McCracken was listed as a parent on the birth certificate.

But Ohio appealed the federal court's ruling, sending the case Obergefell v. Hodges all the way to the Supreme Court. 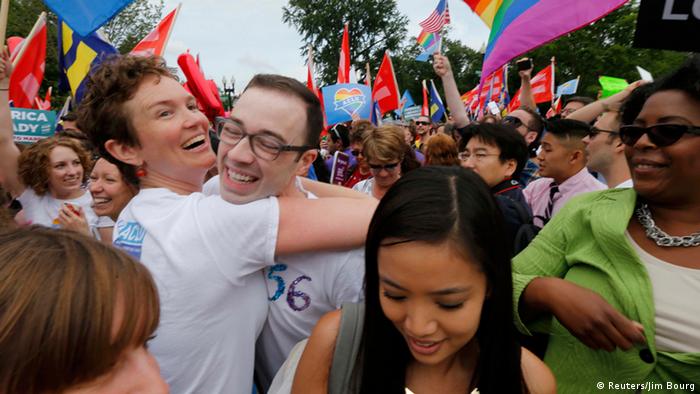 Though same-sex marriage is now legal in every corner of the country, the political battle over LGBT rights continues in other areas of American life.

The legislation provides recourse to a court where citizen can claim religious exemptions from laws or policies that violate their beliefs. Similar provisions have existed at the federal level and in other states for more than 20 years.

The original purpose was to protect freedom of religion - particularly for minority faith communities, according to Daniel Conkle, a law professor at Indiana University.

But critics have expressed concern that these laws will be used by socially conservative business owners to refuse services to same-sex weddings.

Indiana's Religious Freedom Restoration Act created such a public backlash that the legislature subsequently added an amendment, which explicitly states that the law cannot be used to discriminate based on sexual orientation or gender identity.

But the state still doesn't have a comprehensive non-discrimination law that protects LGBT when it comes to housing, employment or public accommodations. In fact, less than half of the 50 US states have laws explicitly protecting LGBT people from discrimination.

"You're going to have couples getting married at 10 a.m., put wedding photos on Facebook and their employer is going to see them and fire them at noon because there's no non-discrimination law that says they can't be fired," said Adam Talbot, a spokesperson for the Human Rights Campaign. "And then their landlord is going to evict them at 2 p.m. because there's no law that says you can't be evicted based on sexual orientation or gender identity."

The Human Rights Campaign, the largest LGBT civil rights organization in the United States, has called for federal legislation to provide nationwide protection for LGBT people. For Obergefell, there's still a long fight ahead.

Queer lifestyle can be openly celebrated in Berlin, and not just on Christopher Street Day. An exhibition shows how Berlin's tradition of tolerance goes a long way back: "Homosexuality" was even invented here. (26.06.2015)

Thousands of Singaporeans have joined a public rally to call an end to discrimination against gay people. However, the officials have said that the country is not ready for the same-sex marriage. (13.06.2015)

Representatives of Germany's state governments have pressured Berlin to allow marriage for same-sex couples - and give them full adoption rights. But not everyone is behind the move toward equality, reports Naomi Conrad. (12.06.2015)

Ireland has said "yes" to gay marriage, public broadcaster RTE confirmed on Saturday. The "Yes" vote was ahead, with more than 60 percent voting in favor, official figures showed. (23.05.2015)

The Hungarian parliament has approved a draft law that would effectively ban same-sex adoption. It also tightens the definition of marriage and the family unit.

Polish LGBTQ activists refuse to be silenced by lawsuits 19.07.2021

The founders of a website exposing LGBTQ discrimination in Poland are being sued by a legal association that is using gaslighting tactics. Though faced with expensive lawsuits, the activists will not be stopped.

Two years after homosexuality was decriminalized in India, activists are debating if now is the time to push for legalizing same-sex marriage. The government says it is "against Indian culture."